Myanmar’s economy is back on the growth track with economic and political reforms as international sanctions against it were recently lifted. Its strategic location as a land bridge between South and South East Asia is attracting international investors. Find out how cogeneration power solutions can play a vital role in energising Myanmar’s economy.

yanmar’s GDP is growing at an average 6–7% annually but its per capita energy consumption of 160 kWh per annum is 20 times less than the world average and is amongst the lowest in the world. Barely 34% of the country’s people have access to electricity. Amongst urban areas, the highest access rate has been recorded in Yangon City at 67%, while rural areas, where most of Myanmar’s people reside, have an electricity access rate of just 16%.

Even though electricity consumption has been growing at an average of 14% per annum over the past five years, with peak load demand touching 4000 MW in 2016, shortages and supply disruptions remain prevalent. This is despite Myanmar being blessed with abundant power generation resources.

The country’s hydropower potential has been estimated at around 108 GW. The country also has large natural gas reserves, estimated at 11 trillion cubic feet (tcf), which is mostly extracted for export. As of November 2016, Myanmar’s total generation capacity was 5307 MW. Hydropower accounted for 58% of the total energy mix, followed by gas power (40%) and diesel (0.35%). Renewable technologies like wind, solar, bio-power and mini hydro accounted for the balance. (Figure 1)

But accumulated delays in investments in power infrastructure, over-reliance on seasonal hydropower production and a rapid increase in electricity demand (tripled over the last decade), with limited new investments into new generation capacities, have resulted in large electricity shortages in the country. Industries and factories that are tenants in Myanmar’s Industrial Zones cannot solely rely on the national grid and are therefore willing to pay a premium for high-quality utilities with high availability because interruptions could lead to significant financial losses and result in higher costs in the form of penalties from end-buyers and logistics providers. 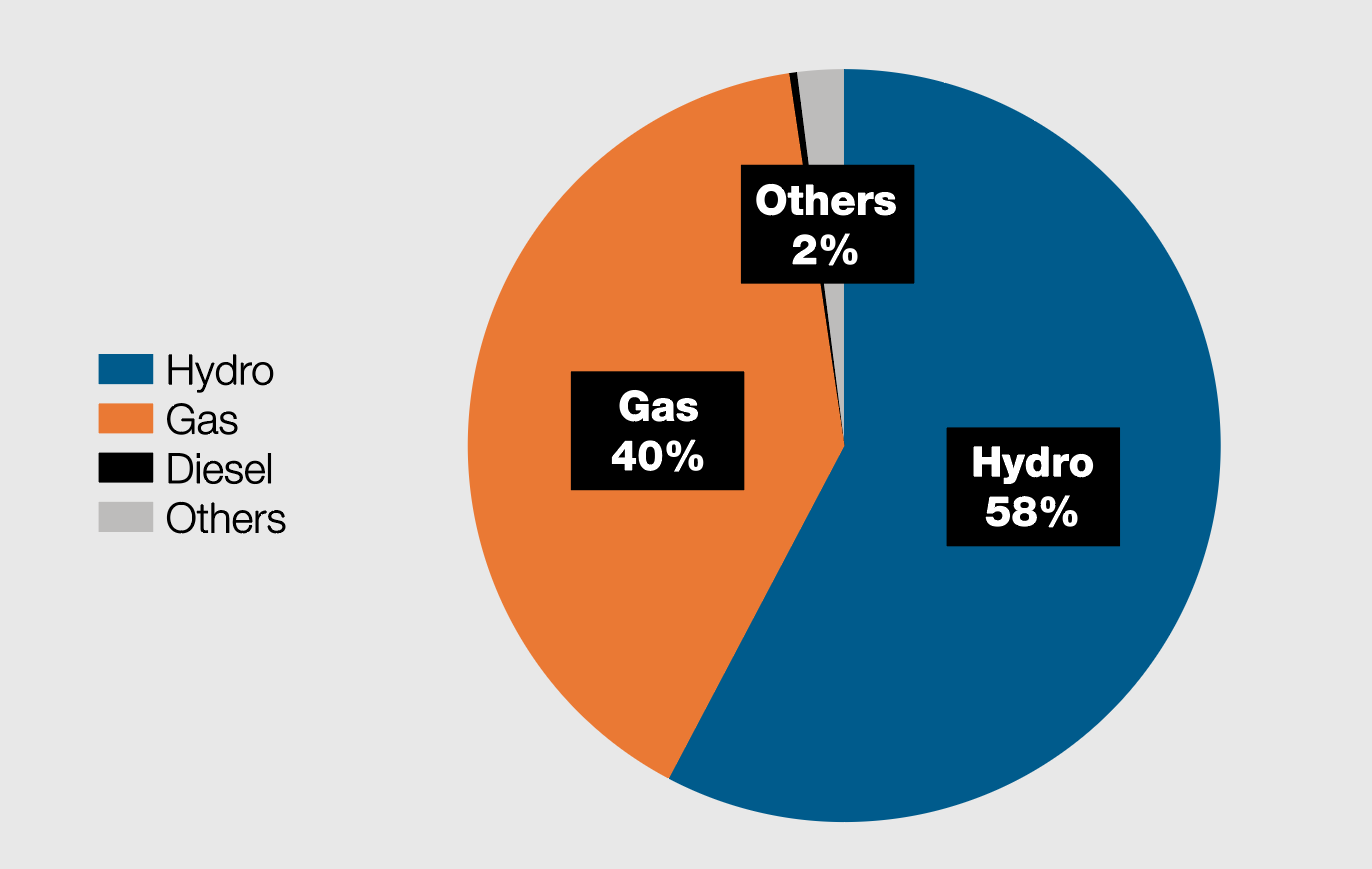 Myanmar has a total of 33 industrial areas (19 industrial zones with Yangon North and East Zones divided into 14 areas functioning as independent zones) that are either planned or currently under construction. According to the Directorate of Industrial Supervision and Inspection Department (DISI), approximately 11,000 registered firms exist within the industrial zones, with 56% located in Yangon zones alone and an additional 12% in Mandalay, which have access to significantly larger markets and a greater supply of labour. (Figure 2)

Traditionally industrial zones / parks have leased land to tenants who need to individually arrange for utilities for themselves via a combination of the national grid and their own on-site high-speed diesel engines. This set-up requires industrial tenants to make large individual investments in utilities, leading to limited economies of scale in the case where assets are not shared between tenants. This drives them to invest in low-efficiency assets with a high life-cycle cost to avoid high up-front investments, and it has a higher environmental impact.

But now some industrial parks are willing to make investments into providing centralised high-efficiency assets to supply “utilities as a service” along with providing land for tenants. As this means a higher capital cost for development, a classic chicken-and-egg situation has arisen where on one side the industrial park starts constructing the required infrastructure for utilities only after garnering a sufficient number of tenants to support the economics of the investment. And on the other, the tenant has a “wait and watch” approach until the industrial park has constructed or started construction on utility assets. 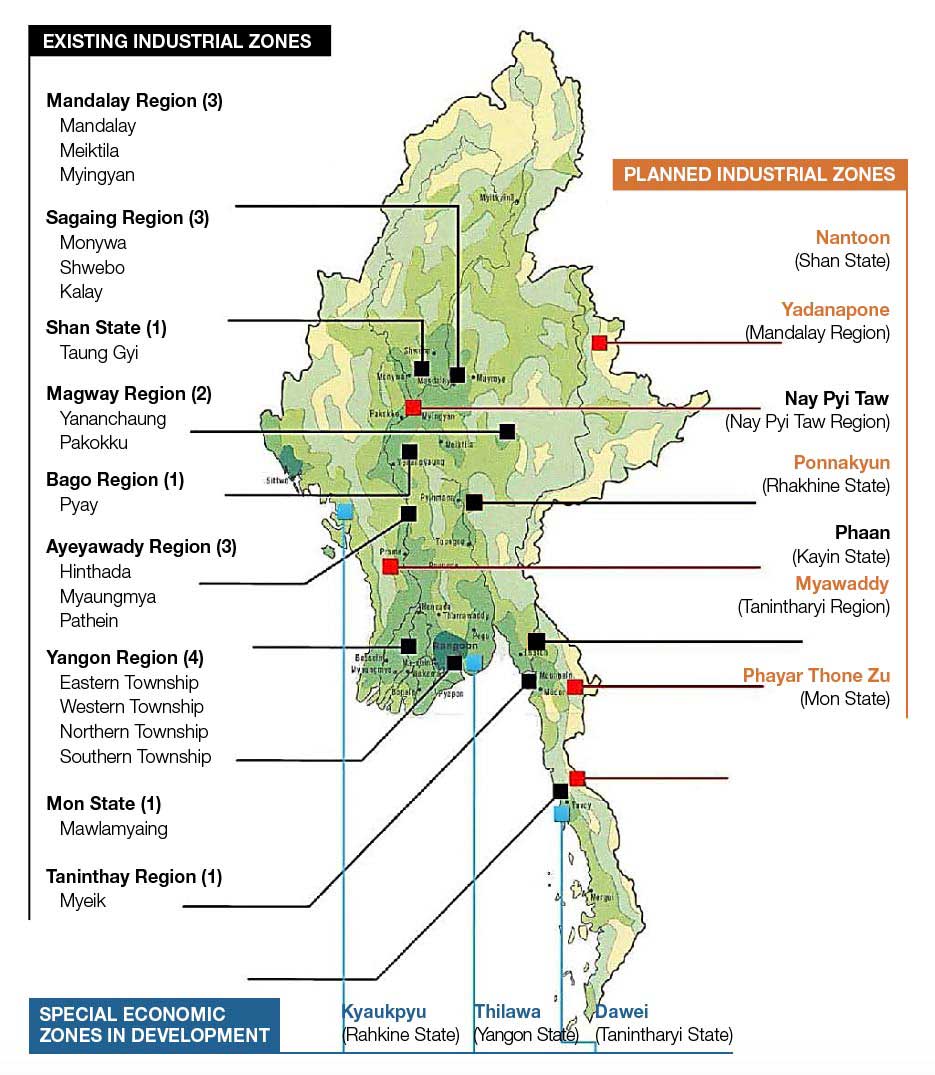 Flexibility in scaling up utilities can play a big role in solving this problem. It can equip industrial zones to make smaller initial investments in the utility asset capacity and allow future extension in capacity in line with growth in the number of tenants. For example, an industrial park can first invest in a 30 MW power plant, and as the number of tenants grows it can extend the generation capacity to 60 MW and eventually to 100 MW.

The other option is for industrial parks to reduce their investment burden in utilities by outsourcing it to third-party private investors who can arrange for the required funds, enter into a long-term commercial arrangement with the park and charge it a fee for making utilities available. Since power generation is usually the largest investment in utilities, it makes sense to consider an Independent Power Producer (IPP) model where a Special Purpose Company (SPC) would invest, construct, own and operate a captive power plant within the park and provide electricity (and potentially steam) to it under a long-term Power Purchase Agreement (PPA). The industrial park could then distribute and sell the electricity and steam to the tenants of the park. (Figure 3)

This structure allows for the use of non-recourse project financing and is conducive for raising debt to leverage the project and reduce the tariffs. It is also a beneficial way to allocate specific risks to parties most suited to manage them. 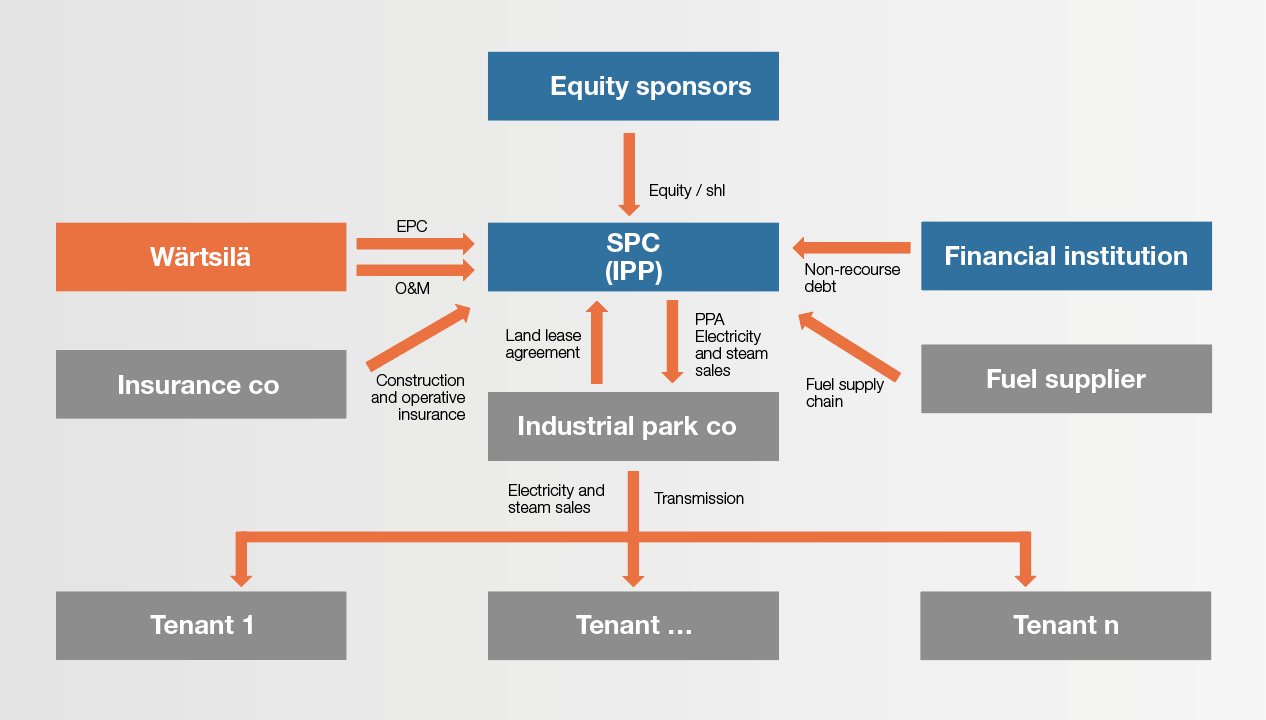 The industrial park manages the electricity and steam transmission risk, credit risk of the tenants and the off-take risk for arranging sufficient amounts of tenants; the engineering, procurement and construction (EPC) contractor manages the construction risk and guarantees the initial performance of the power plant; the operation and maintenance (O&M) contractor guarantees the availability and performance of the power plant during operations and throughout the lifecycle of the asset; the fuel supplier manages all the risks associated with transporting fuel in an agreed upon quality and quantity; the insurance company insures the IPP against machinery breakdowns, property damage, loss of revenue and terrorism risk and tenants manage the pricing risk of electricity and steam.

In this structure, the electricity tariff is linked to inflation and fuel price indices and all costs are passed through to the tenants. The IPP model for a captive power plant with medium-speed combustion engines is optimal for ensuring uninterrupted power supply.

Traditionally, industries have relied on the national grid and used high-speed diesel engines as back-up power when the national grid is not available. However, it is more commercially, economically and environmentally feasible to use medium-speed engines as the main source of power for industrial parks and use the national grid as the backup power option. This method could help increase the lifetime of the power asset to 25–30 years, help increase power generation to 41–45% depending on the fuel used and site conditions, and allow for the use of less expensive and more environmentally sound fuels like natural gas and biofuels.

Even though the initial investment is higher for a medium-speed engine, the life-cycle cost will be decreased as the performance of the plant is significantly improved. Due to the modular design and 10-20 MW unit size of the medium-speed engines, the power plant can be extended in 10 MW blocks, allowing the power capacity to grow with the tenant growth of the industrial park. The plant can use dual-fuel engines capable of running on liquid fuels or natural gas, or else liquid fuel engines can be converted to run on gas at a later stage. Heat recovery boilers can be used to produce steam from the excess heat produced by the engines while generating electricity. Through fuel choice and higher efficiency, the emissions of the power plant are decreased. 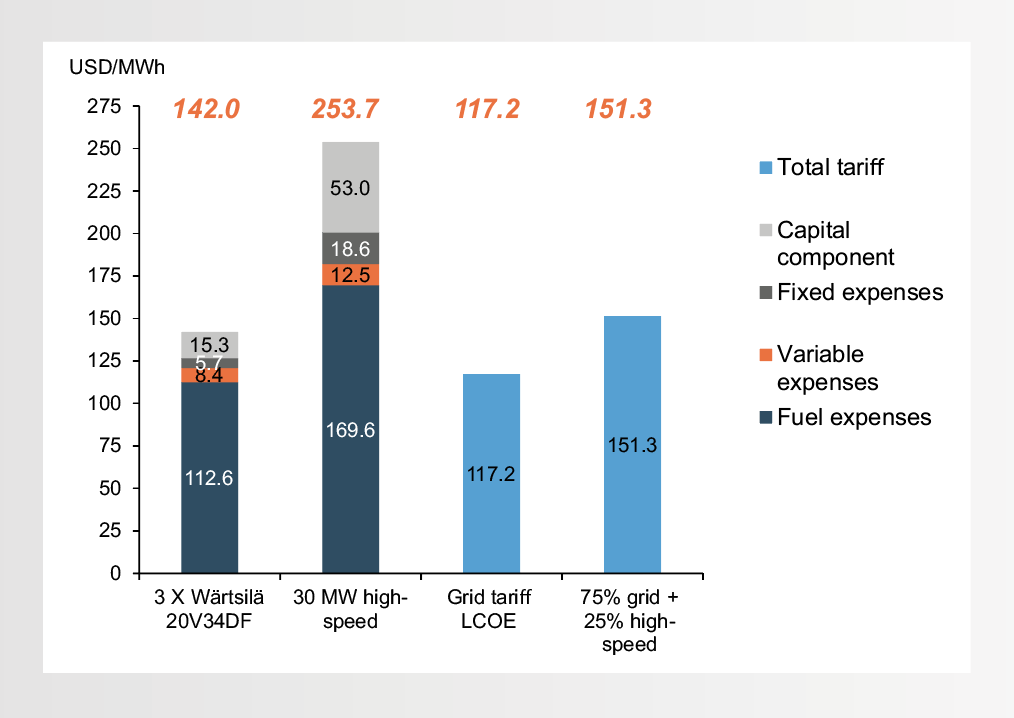 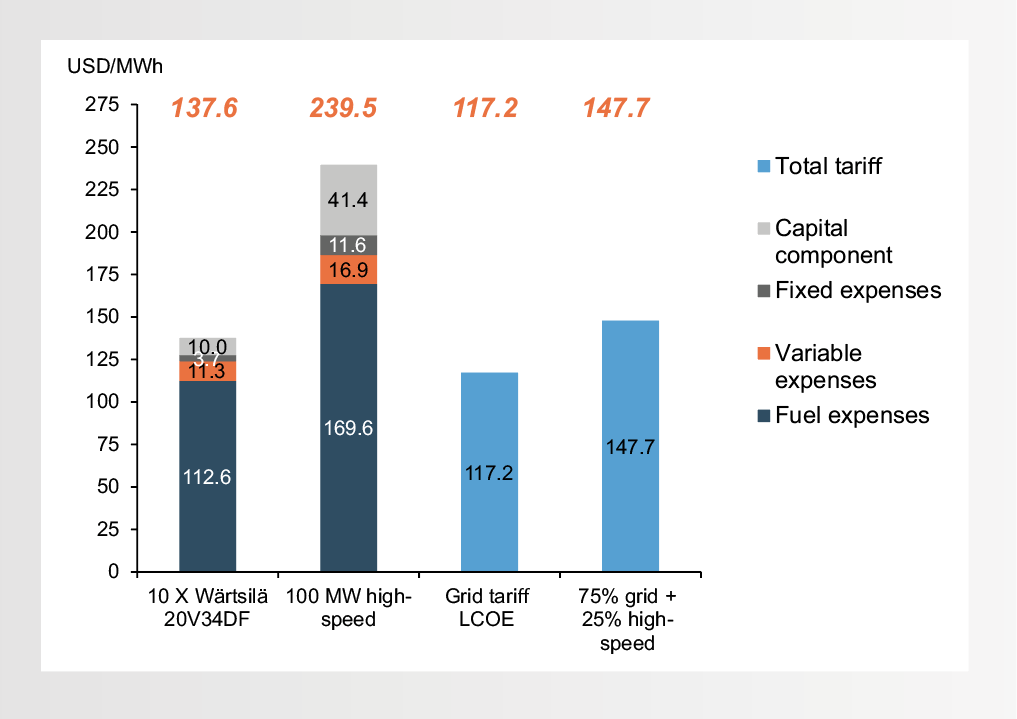 To illustrate this let’s compare the Wärtsilä 20V34DF medium-speed engines of approximately 30 MW (three engines) capacity running on heavy fuel oil (HFO) with a 90% capacity factor with a combination of the national grid and high-speed engines running on diesel where the engines contribute 25% of the electricity produced and 75% is sourced from the national grid, resulting in a 22.5% capacity factor. (Figures 4 and 5)

Assuming among other things that the industrial park operates on three shifts most days, the net capacity of Wärtsilä 20V34DF power plant with three engines would amount to 28.5 MW when running on HFO, and with 10 engines the net capacity would amount to 95 MW. The use of three Wärtsilä 20V34DF medium-speed engines results in a total levelised cost of electricity (LCOE) of USD 142/MWh which is 6% less than the USD 151.3/MWh achieved with a combination of high speed engines (25%) and the grid (75%). (Table 1)

With dual-fuel (DF) Wärtsilä engines, the power plant can run on either liquid fuels or natural gas, and the engines can be immediately and seamlessly switched to run on gas or LNG. HFO is the most feasible liquid fuel as, on average, HFO is 190 USD/tonne less expensive than diesel and is compliant with the emission standards of the World Bank and Myanmar’s local regulations.

Due to modularity and the 10–20 MW unit size of the medium-speed engines, the power plant can be extended in 10 MW blocks, allowing the power capacity to grow with the tenant growth of the industrial park. So even though the initial capital cost investment into a medium-speed engine power plant is higher than the high-speed option, the life-cycle costs of the medium-speed plant are lower. Therefore, it is an optimal solution for Myanmar to power up its economy. 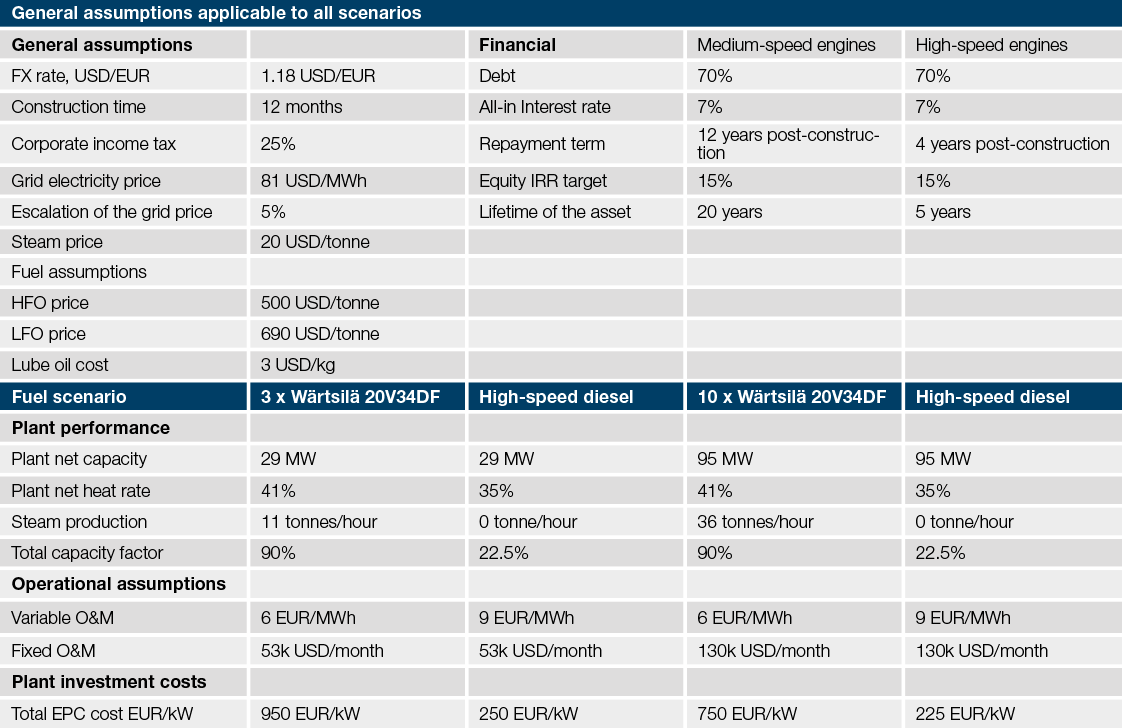