5 trends that will shape the energy sector in 2020

Heading into 2020, the global energy sector must face the challenge of how to balance demand for renewables with the staying power of fossil fuels. How is the sector preparing for the next year — and the next decade? These five trends may provide some insight.

Heading into 2020, the global energy sector must face the challenge of how to balance demand for renewables with the staying power of fossil fuels. How is the sector preparing for the next year — and the next decade? These five trends may provide some insight.

1. Renewable energy will rise to the forefront

Demand for renewable energy will continue to grow, driven by declining costs of technology, the need to reduce CO2 emissions, and growing energy demand in developing and underdeveloped nations.

International Renewable Energy Agency (IRENA) estimates that to meet the goals of the Paris Agreement, the share of renewables in annual global electricity generation needs to increase from 25% today to 86% by 2050. To do that, the world needs to invest USD 110 trillion by 2050 in the sector compared to USD 95 trillion currently planned.

This transformation will lead to a visible shift away from fossil fuels in favour of renewables. Bloomberg BNEF estimates that USD 13.3 trillion will be invested in new power generation assets to fund 15,145 GW of new plants between 2019 and 2050 of which 80% is expected to be carbon-free.  BNEF estimates that by 2050, wind and solar will make up 50% of the world’s electricity generation. Europe is expected to decarbonise the fastest and furthest, while China and the US will play catch-up.

Despite the optimistic outlook for renewables, parts of the world will continue burning fossil fuels including oil, gas, and coal for energy production. The use of these energy sources will continue in some places due to a lack of political will along with the availability of cheap coal. Additionally, the shift to renewables is not happening fast enough to meet rising electricity demand. The International Energy Agency (IEA)’s recently released World Energy Outlook 2019 points out that unless major policy changes are made, society is and will continue to be heavily dependent on fossil fuels.

The report says that, given today’s policy intention and targets, “A three-way race is underway among coal, natural gas and renewables to provide power and heat to Asia’s fast-growing economies. Coal is the incumbent in most developing Asian countries: new investment decisions in coal-using infrastructure have slowed sharply, but the large stock of existing coal-using power plants and factories (and the 170 GW of capacity under construction worldwide), provides coal with considerable staying power.”

According to BNEF, coal will continue to grow in Asia, but collapse everywhere else and peak globally in 2026. Gas capacity instead, according to BNEF, will play a vital role to support the increasing flexibility needs also in the longer term.

3. Flexibility to the forefront

As the world moves towards 100% renewable energy, reliability will emerge as a key area of concern. This is where flexibility and innovation in supply will play a key role.

“Power is needed at all times, even when wind is not blowing or the sun is not shining. System-level flexibility with energy storage solutions, flexible thermal power generation, and interconnectors are essential to enable the penetration of cheap renewables and balance their intermittent nature,” says Pitsinki.

Worldwide, there will be a need to look more closely at controlling demand by reducing, increasing or shifting it to a specific period of time, according to IRENA.

IRENA’s recent report states: ‘The potential for demand-side flexibility, expressed as the sum of flexible load at each hour of the year, is high and, according to IEA (2018), is equal to 4 000 TWh (457 GW average) today and is expected to grow to 7 000 TWh (800 GW average) by 2040 due to the electrification of transport and buildings (mostly electrification of heat). While there are already parts of the world in which demand-side flexibility is being leveraged, there is still a long way to reach the full potential of this flexibility source.”

4. The age of storage and decentralised grids

Energy storage has become more commercially feasible in the past few years with battery prices falling almost 80%. The good news is that prices will fall further. According to BNEF, there will be a sharp decline in the cost of lithium-ion batteries, and energy storage installations around the world will multiply exponentially, from 9GW/17GWh deployed as of 2018 to 1,095GW/2,850GWh by 2040.

Energy storage is also likely to shape decentralised grids driven by consumer energy decisions such as rooftop solar and behind-the-meter batteries. BNEF estimates that batteries, power plants that run on gas, and dynamic demand could help wind and solar reach more than 80% penetration in some markets.

Apart from batteries, there are several new technologies that are being researched and developed for energy storage. These enabling technologies help stabilise energy systems’ demand and supply issues by converting extra power into hydrogen, heat or some other form of energy carrier while at the same time decreasing the curtailment in renewable energy generation.

“The big driver for these technologies is the availability of ‘free’ excess electricity from wind and solar power. Hydrogen is relatively easy and cheap to produce, but it has low energy density and thus is expensive to transport as such,” explains Pitsinki.“Combustion technologies also have limited ability to use hydrogen. That is why the big push towards Power-to-X type of technologies, where hydrogen is further synthesised into methane or methanol that are easier to handle and use in energy production,” he adds. 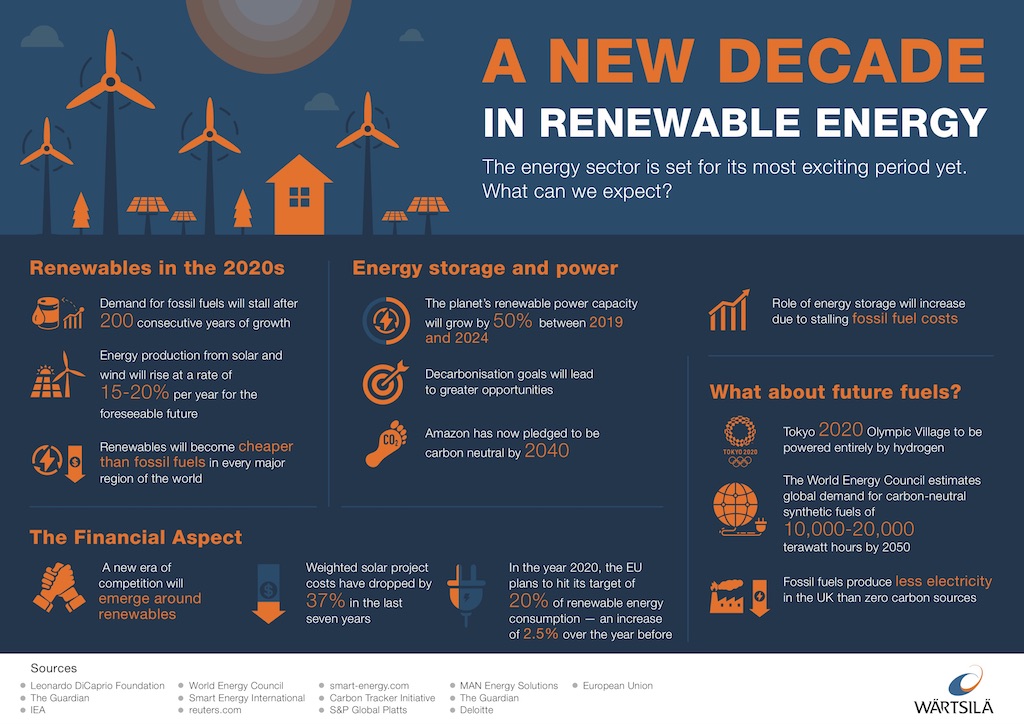