Barcolana 50: A race to remember

The Barcolana regatta is one of the world’s biggest sailing events, attracting a cult following around the world. Relive the exhilaration of this prestigious race as you read about its origins and also its mass appeal.

The Barcolana regatta is one of the world’s biggest sailing events, attracting a cult following around the world. Relive the exhilaration of this prestigious race as you read about its origins and also its mass appeal.

It was 19 October, 1969. The port city of Trieste in North-eastern Italy was drenched in autumn colours. 51 sailboats had gathered in the shallow Gulf of Trieste to participate in a regatta or boat race. Started by a group of friends from the Società Velica di Barcola e Grignano, the idea behind the regatta was simplicity itself - have a sailboat? Come and take part.

Nearly 50 years later, that small event has been transformed into one of the largest and most popular sailing contests in the world. Over 200,000 people gathered at le rive, the city’s seafront as over 2,689 boats took part in the Barcolana 50 regatta. Today, it hosts over 400 events, attracting sailing aficionados and veterans including the likes of World Championship winners Vasco Vascotto and Russell Coutts.

“Barcolana was never a normal regatta, it has been special from day one,” says Piero Barcia, owner of the Nibbio. He should know. After all, his 97-year-old boat is a legend among the locals, having participated in every single edition of the regatta, while making it to the winners’ podium 32 times.

“What is truly magical is the feeling you get when you’re in the middle of the race and you see 500 boats in front of you and 1000 behind. That is something spectacular, something indescribable,” says Barcia.

The beauty and exhilaration of the event aside, there is no denying that completing the regatta requires both teamwork and tremendous experience. When you are surrounded by more than 2,000 sailboats, both the start and the halfway mark can be dangerous. Strong winds, or bora, as the locals call it, is quite common in the Gulf of Trieste and can be problematic even for experienced sailors.

“The most challenging part is the start. You have to be careful and check both your own and other boats’ sails. You have to be sure that the crew is in the right position and that the sails are trimmed for speed and guarantee the maximum lift,” says Alex Peresson, four-time winner of the regatta and co-owner of the Fanatic.

These and numerous other precautions were certainly being taken into account by boat crews when the race began. This year’s winner was the Spirit of Portopiccolo, an 86-feet superyacht that won the regatta for the second year in a row, finishing in a record time of under 57 minutes. 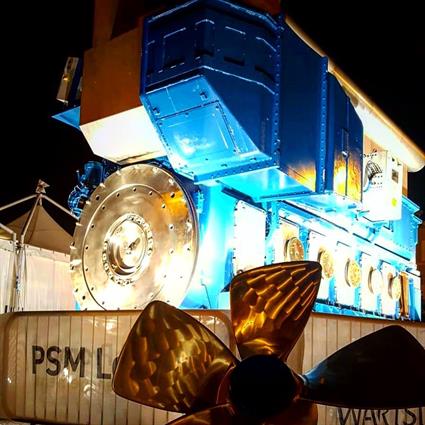 To celebrate the 50th Anniversary of the Barcolana regatta, the Wärtsilä 50 Engine was showcased at the event

Sailing in the same boat

While the races were clearly on everybody’s mind, the need to care for the environment was a priority as well. After all, this year’s slogan for the regatta was ‘Love for the sea and the land’, representing Barcolana’s commitment to being a zero-impact event. This included measures to foster recycling on both land and sea while reducing the use of non-recyclable plastic.

Wärtsilä Italia’s stand at the regatta was dedicated to the promotion of sustainable initiatives and highlighted the innovative Seabin Project which helps in the collection of floating rubbish from the world’s oceans and seas.

The Barcolana regatta has certainly come a long way, growing from a small local event to one known across the world. In spite of this, the one factor that has remained constant is the sense of belonging and fellowship among both sailors and enthusiasts alike. The whole city joins the celebrations with the locals and tourists coming together to create new experiences and make new memories.

“Even when you have been coming here every year, it’s a whole new emotion every time,” concludes Peresson.