Company
Home
Insights
At the forefront of preserving marine life

At the forefront of preserving marine life

Evidence has been mounting that underwater noise emitted by the shipping industry has a negative impact on the oceans’ wildlife. As awareness about the issue grows, the demand for quieter shipping is increasing. Soon, new requirements on low-noise-emitting ships will be imposed on the marine industry. Luckily, well-timed research work started by R&D a few years ago has prepared Wärtsilä for this challenge.

Evidence has been mounting that underwater noise emitted by the shipping industry has a negative impact on the oceans’ wildlife. As awareness about the issue grows, the demand for quieter shipping is increasing. Soon, new requirements on low-noise-emitting ships will be imposed on the marine industry. Luckily, well-timed research work started by R&D a few years ago has prepared Wärtsilä for this challenge.

Globalisation of the world economy means stronger connectivity between different countries. Over the past years, global shipping has increased steadily to sustain the demand for an effective, safe and cheap way to transport goods, worldwide. Today, the oceans don’t look like a lonely blue desert anymore.

However, with global shipping, underwater background noise has increased along the main oceanic routes, along the coast and especially at the main harbor locations (Figure 1). It is estimated that underwater noise in the oceans has risen steadily by +3 dB every ten years, and there is no sign of the trend being reversed. This has a negative impact on marine wildlife and their ability to communicate and search for food as shown by the latest studies in marine biology. The relevance of the underwater noise control cannot be neglected anymore, and it is now up to government leaders to take a stand.

Vancouver Fraser Port Authority’s EcoAction Program is a case in point. The program offers harbour dues discounts to vessels that embrace environmental best practices in the field of emissions reduction. For instance, ship operators demonstrating low underwater noise emission are awarded a 23% discount. The aim is to encourage shipping companies to lower their noise emissions since they affect the at-risk whale population in the Vancouver area.

The Canadian department of transportation sponsored the Quietening Ships to Protect the Marine Environment workshop hosted at the International Maritime Organization (IMO) headquarters (London, UK) early this year. The aim of the technical workshop was to assess the benefits and barriers of using new ship designs and to evaluate technologies to reduce underwater noise from ships. The workshop aimed at bringing more than 140 world experts and policy makers together to share knowledge and work on quiet ship designs and technologies with the purpose of protecting the marine environment. Carlo Pestelli, R&D manager, Noise & Vibration, was invited to represent Wärtsilä at this important event because of his participation in one of the key recent projects on the topic: SONIC, funded by the EU.

The feat of developing silent technology Fig. 2 - The SONIC project team visiting Wärtsilä’s multi-product factory in Trieste during a project review meeting. Carlo Pestelli (third from left) and Hannu Tienhaara, in the centre, hosted the event.

Interaction with the marine biology network was established by obtaining necessary knowledge for the project from renowned institutes in the field of marine biology. The final goal was to develop guidelines and regulations for the marine industry.

The aim of the SONIC project was to develop tools to investigate and mitigate the effects of underwater noise generated by shipping. Three objectives were pursued during the execution of the project. The first objective was to enhance the understanding of noise generated by a cavitating ship propeller. The second objective was to validate predictions of noise levels for individual ships, and to classify ships based on simplified noise models. SONIC’s third objective was to map the noise generated by shipping in general and to propose mitigation measures for quietening the oceans. The cavitation of ship propellers has been identified as the main source of background noise. However, other onboard noise sources, such as propulsion machineries, have also been identified and studied during the execution of the project. Figure 3 shows the underwater noise generation process from a mechanical source such as a propulsion engine studied by Wärtsilä. 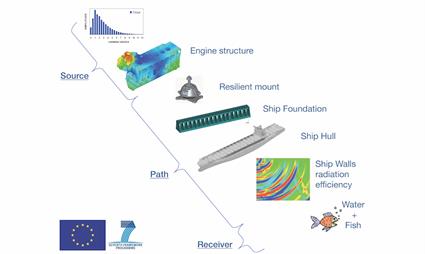 Being part of the SONIC project was a strategic goal for Wärtsilä: the new guidelines created during the SONIC project would have been included in the major Classification Societies Regulations and this would have resulted in new requirements for Wärtsilä in the Marine Business. Wärtsilä R&D had an intuition about the growing importance of the topic and thus recognised the need to be involved in SONIC from the very beginning and to create a strong network within the underwater noise community.

In autumn 2012, Wärtsilä joined the SONIC project and started to invest resources in it. Wärtsilä’s leading role was taken by the Noise and Vibration (N&V) team in the R&D department. The N&V team was selected due to their specific knowledge of the field, together with their practical approach of experimental investigation and their experience in managing complex, innovative projects. This unique mix was perfect to create a fruitful dialogue and real cooperation between universities, research centres, shipyards and machinery manufacturers that were part of the SONIC project team (Figure 4). The biggest challenge for the project team was to organise and perform full-scale underwater noise measurements to be compared with scale-model noise measurement at a towing tank and in underwater noise simulations. In Figure 5, Carlo Pestelli and Moreno Almerigogna are performing underwater noise measurements in the North Sea during sea trials on board the research vessel Princess Royal, owned by Newcastle University.

The research work of the N&V team focused on the contribution of the machinery to the ship’s underwater noise signature (see Figure 3). The research conducted led to an innovative idea for the direct measurement of the force transmitted by a resilient mounted machine to the ship hull: a new concept of “force sensor” was designed, manufactured and tested by the N&V team for this purpose.

The idea of the force sensor was proposed as a patent to the EU patent office under the name: Mounting element and method for monitoring vibrations of internal combustion engine.

The SONIC project provided Wärtsilä with the knowledge to manage the future requirements from silent ship applications as well as to get the connection to the wide network of stakeholders in the underwater noise field.

Wärtsilä’s technical heritage built in its history of 185 years is very well known and respected in the industry, and it was further enriched by the SONIC experience. For this reason, the publishing company John Wiley & Sons proposed that Wärtsilä participate in the Encyclopedia of Maritime and Offshore Engineering: The Machinery Noise and Vibration Sources section was prepared by Hannu Tienhaara, Carlo Pestelli and Moreno Almerigogna from R&D. Our Purpose and Smart Marine Vision in action: An Oceanic Awakening

In autumn 2018, Wärtsilä launched the SEA20 initiative, a global league of cities dedicated to rethinking their roles in marine

and energy ecosystems, hastening the adoption and deployment of best practices, embracing digitalisation and legislating new environmentally friendly, sustainable and smarter ways of doing business across the oceans. It is called An Oceanic Awakening: an inspiring One Wärtsilä global initiative which will raise awareness on a wider societal scale, ask tough questions and suggest that the time has come for radical improvements in addressing inefficiencies from marine to energy businesses, from oceans to ports, cities and beyond.

The Vancouver Fraser Port Authority’s EcoAction Program, the technical workshop “Quieting Ships to Protect the Marine Environment” at IMO and the EU-funded project SONIC are clear examples that the need for An Oceanic Awakening is growing.

The world is looking for new ways of doing business and Wärtsilä is in a position to lead this change and show the way forward. With the widest product portfolio in the marine industry and a strong focus on R&D with investments of about 3.2% of net sales in 2018, Wärtsilä is in the unique position to be a smart technology company capable of supporting the change towards a sustainable society and quieter oceans.

When a relevant achievement takes place, it is not because of one person or even one team. The success of Wärtsilä R&D lies in its history and all the people who helped create its legacy of technical competence to shape a better future. A few names of those who always cooperate in the Noise & Vibration field: Hannu Tienhaara, Kari Saine, Peter Sundström, Jan Holmberg, Claus Paro, Zengxin Gao, Francesco Degano, Moreno Almerigogna, Giampaolo Fabro, Francesco Licciulli and Manjunath Patil.