The process for converting the energy in a fuel into electric power involves the creation of mechanical work, which is then transformed into electric power by a generator in a "simple cycle", causing efficiency losses in the process. Depending on the fuel type and thermodynamic process, the overall efficiency of this conversion is typically around 30 – 40%. This means that a significant amount of the latent energy of the fuel ends up wasted. Much of this wasted energy ends up as thermal energy in the hot exhaust gases from the combustion process.

To increase the overall efficiency of electric power plants, multiple processes can be combined to recover and utilize the residual heat energy in hot exhaust gases. 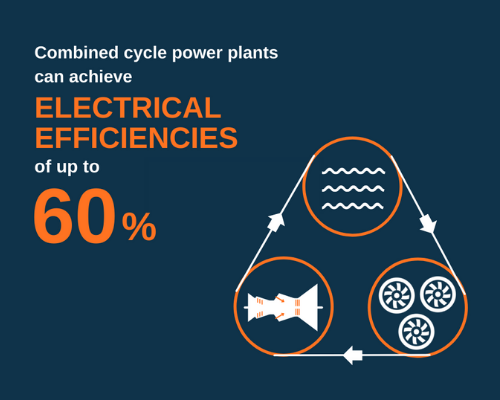 What is the difference between simple cycle and combined cycle?

The term “combined cycle” refers to the combining of multiple thermodynamic cycles to generate power. Combined cycle operation employs a heat recovery steam generator (HRSG) that captures heat from high temperature exhaust gases to produce steam, which is then supplied to a steam turbine to generate additional electric power. In combined cycle mode, power plants can achieve electrical efficiencies of up to 60 percent. The process for creating steam to produce work using a steam turbine is based on the Rankine cycle.

The most common type of combined cycle power plant utilizes gas turbines and is called a combined cycle gas turbine (CCGT) plant. Because gas turbines have low efficiency in simple cycle operation, the output produced by the steam turbine accounts for about half of the CCGT plant output. There are many different configurations for CCGT power plants, but typically each GT has its own associated HRSG, and multiple HRSGs supply steam to one or more steam turbines. For example, at a plant in a 2x1 configuration, two GT/HRSG trains supply to one steam turbine; likewise there can be 1x1, 3x1 or 4x1 arrangements. The steam turbine is sized to the number and capacity of supplying GTs/HRSGs.

How does a combined cycle power plant work?

The HRSG is basically a heat exchanger, or rather a series of heat exchangers. It is also called a boiler, as it creates steam for the steam turbine by passing the hot exhaust gas flow from a gas turbine or combustion engine through banks of heat exchanger tubes. The HRSG can rely on natural circulation or utilize forced circulation using pumps. As the hot exhaust gases flow past the heat exchanger tubes in which hot water circulates, heat is absorbed causing the creation of steam in the tubes. The tubes are arranged in sections, or modules, each serving a different function in the production of dry superheated steam. These modules are referred to as economizers, evaporators, superheaters/reheaters and preheaters.

The economizer is a heat exchanger that preheats the water to approach the saturation temperature (boiling point), which is supplied to a thick-walled steam drum. The drum is located adjacent to finned evaporator tubes that circulate heated water. As the hot exhaust gases flow past the evaporator tubes, heat is absorbed causing the creation of steam in the tubes. The steam-water mixture in the tubes enters the steam drum where steam is separated from the hot water using moisture separators and cyclones. The separated water is recirculated to the evaporator tubes. Steam drums also serve storage and water treatment functions. An alternative design to steam drums is a once-through HRSG, which replaces the steam drum with thin-walled components that are better suited to handle changes in exhaust gas temperatures and steam pressures during frequent starts and stops. In some designs, duct burners are used to add heat to the exhaust gas stream and boost steam production; they can be used to produce steam even if there is insufficient exhaust gas flow.

Saturated steam from the steam drums or once-through system is sent to the superheater to produce dry steam which is required for the steam turbine. Preheaters are located at the coolest end of the HRSG gas path and absorb energy to preheat heat exchanger liquids, such as water/glycol mixtures, thus extracting the most economically viable amount of heat from exhaust gases.

The superheated steam produced by the HRSG is supply to the steam turbine where it expands through the turbine blades, imparting rotation to the turbine shaft. The energy delivered to the generator drive shaft is converted into electricity. After exiting the steam turbine, the steam is sent to a condenser which routes the condensed water back to the HRSG.

Designs and configurations for HRSGs and steam turbines depend on the exhaust gas characteristics, steam requirements, and expected power plant operations. Because the exhaust gases from a gas turbine can reach 600ºC, HRSGs for GTs may produce steam at multiple pressure levels to optimize energy recovery; thus they often have three sets of heat exchanger modules – one for high pressure (HP) steam, one for intermediate pressure (IP) steam, and one for low pressure (LP) steam. The high pressure steam in a large CCGT plant can reach 40 – 110 bar. With a multiple-pressure HRSG, the steam turbine will typically have multiple steam admission points. In a three-stage steam turbine, HP, IP and LP steam produced by the HRSG is fed into the turbine at different points.

The HRSGs present operational constraints on the CCGT power plant. As the HRSGs are located directly downstream of the gas turbines, changes in temperature and pressure of the exhaust gases cause thermal and mechanical stress. When CCGT power plants are used for load-following operation, characterized by frequent starts and stops or operating at part-load to meet fluctuating electric demand, this cycling can cause thermal stress and eventual damage in some components of the HRSG. The HP steam drum and superheater headers are more prone to reduced mechanical life because they are subjected to the highest exhaust gas temperatures. Important design and operating considerations are the gas and steam temperatures that the module materials can withstand; mechanical stability for turbulent exhaust flow; corrosion of HRSG tubes; and steam pressures that may necessitate thicker-walled drums. To control the rate of pressure and temperature increase in HRSG components, bypass systems can be used to divert some of the GT exhaust gases from entering the HRSG during startup.

The HRSG takes longer to warm up from cold conditions than from hot conditions. As a result, the amount of time elapsed since last shutdown influences startup time. When gas turbines are ramped to load quickly, the temperature and flow in the HRSG may not yet have achieved conditions to produce steam, which causes metal overheating since there is no cooling steam flow. In 1x1 configurations, the operation of the steam turbine is directly coupled to the GT/HRSG operation, limiting the rate at which the power plant can be ramped to load. Steam conditions acceptable for the steam turbine are dictated by thermal limits of the rotor, blade, and casing design.

Control equipment for nitrogen oxides (NOx) and carbon monoxide (CO) emissions are integrated into the HRSG. As these systems operate efficiently over a narrow range of gas temperatures, they are often installed between evaporator modules. 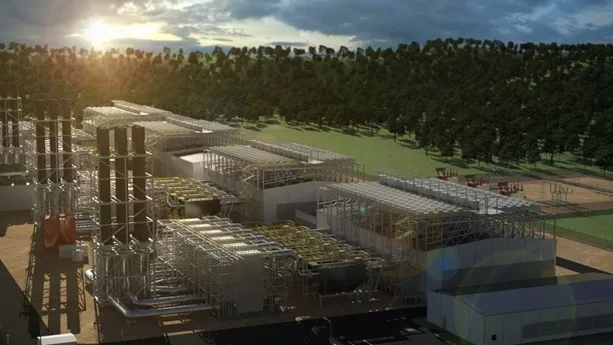