New legislation and customer awareness are driving change in how cruise ships treat and discharge wastewater. But is it enough?

New legislation and customer awareness are driving change in how cruise ships treat and discharge wastewater. But is it enough?

Few of us know how much water we use every day. From that first glass of water in the morning and brushing your teeth to umpteen cups of coffees during the long working day. Then cooking dinner, washing up, and giving the kids a bath. Let’s take Helsinki as an example – 158 litres per person per day, according to the Finnish Environmental Services Authority.

On average, a cruise ship passenger uses 200 litres of water per day, with some six-star cruise ships using up to 400 litres of water per person per day. There are, nowadays, cruise ships that are so big that they rival the size of smaller cities. Earlier this year, the biggest cruise ship yet, the Symphony of the Seas, was completed – the ship’s almost as long as the Empire State building is tall and able to welcome 8,000 people on board. However, there are still larger to come – an 11,732-person vessel is under construction and scheduled to enter service in 2022.

“We are seeing quite a shift in the size and also the type of cruise ships being built, for example the growth in small cruise ship construction is also booming to access areas such as the Polar regions or the Amazon where cruise ships usually haven’t sailed,” says Trevor Dodd, Water Systems Engineering Manager at Wärtsilä. “Customers want to sail where they haven’t sailed before and that places huge demands on cruise liners as they are going into more sensitive areas than ever before.”

The environmental impact and legislation(s)

The environmental risks have led to an up-shore of legislation. The International Convention for the Prevention of Pollution from Ships (MARPOL) is the main international convention covering prevention of pollution of the marine environment by ships from operational or accidental causes. The MARPOL Convention was adopted on 2 November 1973 at IMO. Recommendations on international effluent standards and guidelines for performance tests for sewage treatment plants, Resolution MEPC.2(6), was adopted on 3 December 1976. “Currently this legislation only controls the discharge of blackwater and you only have to have an approved operational sewage treatment plant within 12 nautical miles of land,” says Dodd. “There is nothing to stop a ship putting raw blackwater directly into water outside of 12 nautical miles.”

However, local authorities can impose discharge consent limits that are different to those required under IMO, and in addition some special areas are taking a zero discharge approach.

The World Shipping Council notes in a summary: “the key to successful greywater treatment lies in its immediate processing before it turns anaerobic.” A wastewater tank – similar to a small town’s water management system - can be of a considerable size. “It can occupy a room or compartment that is as big as the main engine compartment,” says Dodd. “On a 6,000-person cruise ship, Wärtsilä can typically be installing bioreactors with a capacity of 400 cubic metres.”

Check-ups of ships and monitoring of discharges isn’t a legal requirement once the wastewater treatment plant is in place, provided that the equipment has been Type Approved. “When you build a ship you need to have one fitted, but then for the rest of the ship’s lifespan the performance of this equipment is not monitored,” says Dodd’s colleague Geir Hellum, Director Water & Waste Systems for Wärtsilä's Environmental Solutions Business.

Which illustrates that without monitoring and enforcement, any and all legislation is toothless. There is, however a notable exception to the lack of vigilance: The Alaska Department of Environmental Conservation (ADEC), which operates a Cruise Ship Programme that requires cruise operators to apply for a permit for their vessel to operate in Alaskan waters. “Application for this permit requires the vessel to regularly analyse effluent samples throughout the year, increasing to twice per month during the Alaskan cruising season. These results are later published in the public domain,” says Dodd, who further explains that the risk for cruise liners is significant – ADEC will impose significant fines for any compliance violations, and in extreme cases may even revoke the right to sail within Alaskan waters.

The Alaskan set-up also illustrates that there needs to be a real downside if a ship doesn’t comply. Cruise ships hopping from port to port are under increased scrutiny – not just from harbour masters, but from their own passengers. Which client would want their wastewater to ruin that pristine beach or poison the bay where children swim after school? “Passengers are becoming much more aware of the environmental impact of the vessel,” says Dodd. “And certain owners are telling us at Wärtsilä that passengers are using environmental footprints and policies as one of their key considerations when they’re choosing a cruise line to sail with.” 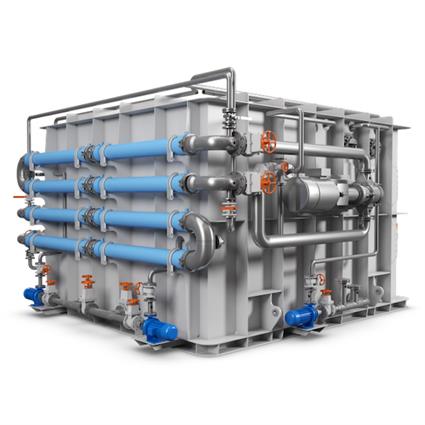 “The regulations are incredibly varied throughout the world, which makes the situation very difficult for operators to actually understand what they need to install on their ships,” says Dodd.

With such a patchwork of legislation, and the looming likelihood that more places ramp up their efforts to protect coasts and waterways, ship operators could protect themselves from future challenges by installing the most cutting-edge technology. In essence covering their bases and thus future-proofing against risk.

There are several options on the market. Some are less technically compliant than others, making them a bad investment in theory. But in practice it doesn’t matter, unless authorities monitor performance. “Wärtsilä has a lot of competition from very low-cost pieces of equipment that have been approved, but unless there is policing that equipment won’t be maintained,” says Dodd. “We have been advocating as a company, as are several port authorities, to introduce localised monitoring and policing.”

The Wärtsilä Membrane BioReactor (MBR) technology is an evolution of the STP and is targeted primarily at cruise ships. It is based on biological degradation and membrane separation and allows for the treatment of grey- and blackwater to satisfy the most stringent standards. The process produces the highest quality discharge without requiring any addition or generation of chemicals that are hazardous to the environment or ship operation. The system relies on a biological process to reduce the organic content of the waste and an ultrafiltration membrane system: to polish the effluent and remove solids and bacteria.

Wärtsilä has, to date, supplied over 100 vessels with this equipment, 40 of which have been retrofits. “Solids and bacteria cannot get through, as long as the membranes are intact,” explains Dodd. And to make sure that they are intact online turbidity monitoring is employed. Wärtsilä offers maintenance agreements. “With our major customers, such as Carnival, we visit the ships twice a year and do a monthly review of operating parameters on board,” explains Dodd. “And hopefully moving forward we will be able to access that information directly from the ship and can advise the operator on preventative maintenance while they’re out at sea.”

“Our vision,” concludes Hellum, “is to be able to offer a total integrated water system – at optimised performance, the lowest operational costs and lowest Capex costs – and thus offer peace of mind to for the crew on board.”