Wärtsilä’s new retractable thruster is an improvement across all parameters

The WST-24R thruster, with its eight-degree tilted propeller shaft configuration, delivers 23% more effective thrust than its predecessor, uses less fuel and takes up less space on board.

Five years ago, Wärtsilä embarked on a complete renewal of its entire thruster portfolio, with dynamic positioning applications built around a more hydrodynamically efficient eight-degree tilted gearbox. The process, which started with the launch of the WST drilling series, moved to the next stage last December with the official launch of the WST-24R, the world’s first retractable thruster with a tilted gearbox and electric steering and retraction.

Like its predecessor, the LMT-FS1510, the WST-24R has been developed for vessels that require the safety of dynamic positioning while operating on offshore sites, but also need to be able to retract them en route. It has a power rating of 2400 kW, the same as with the LMT-FS1510, making it an ideal choice for vessels such as shuttle tankers, and offshore support and construction vessels.

The new design has been developed over a period of more than 18 months by a team at Wärtsilä Marine’s Technology and Services Centre in Drunen, and is an improvement on the LMT-FS1510 across all parameters. Effective thrust has been increased by 23% compared to a conventional unit with a 90-degree gearbox and a tilted nozzle, lowering fuel consumption and operational cost while also improving the vessel’s dynamic positioning performance.

The lean design means fewer components, which translates into lower maintenance costs, safer and simpler installation, less space taken up on the vessel, and a reduced risk of oil leaking to the environment. 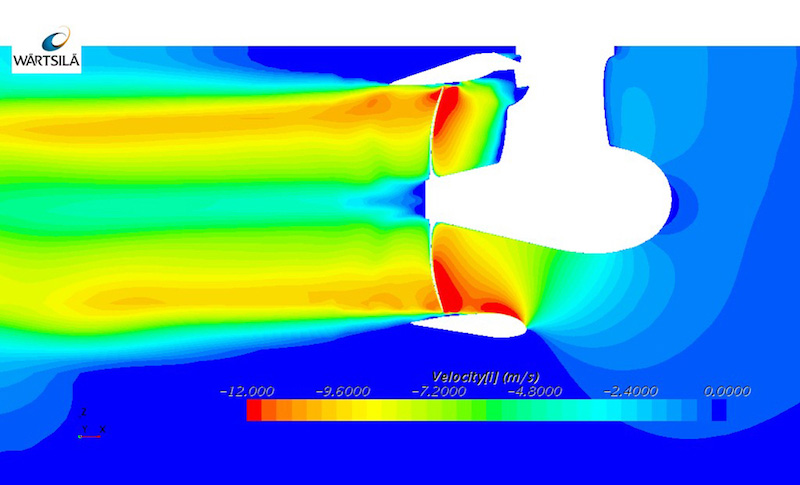 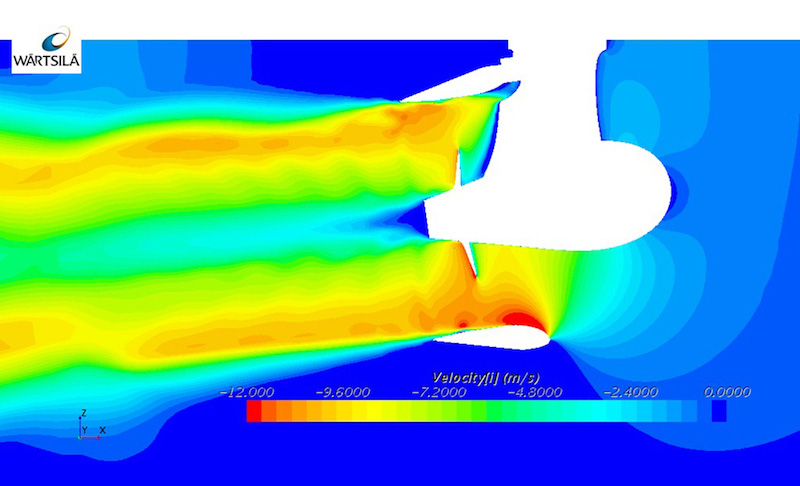 Fig. 1 - These images show the difference between how the thruster stream interacts with the hull depending on whether a conventional thruster or a tilted thruster is installed.

Since the redesign began at the start of 2016, Wärtsilä’s team has kept in close contact with ship owners and yards, to make sure that the product meets their requirements for a retractable thruster. This has pushed the team to significantly alter the design focus, making ease of installation, serviceability and maintenance as much a priority as performance.

With a conventional thruster (with a 90-degree gearbox) such as the LMT-FS1510, the downward deflection of the jet is not enough to stop the stream from the thruster hitting the bottom of the ship, causing high interaction losses between the thruster and the adjacent hull. A nozzle tilted five degrees counteracts this to some extent, but the effective thrust is still significantly reduced.

On the other hand, in the WST-24R as with Wärtsilä’s drilling steerable thruster family, the complete pod, shaft line, propeller and nozzle is tilted by eight degrees. This is the tilt angle that research indicates is enough to deflect the jet downward sufficiently to clear the hull without significantly reducing horizontal thrust. (Figure 1)

In this configuration there is a further risk of thruster–to-thruster interaction. The eight-degree tilt also combats this by deflecting the jet to reduce ‘forbidden zones’ where thrusters cannot operate without blowing into other thrusters.

Simply adding a tilted gearbox to the existing LMT-FS1510 design would have significantly increased the amount of space taken up on board by the thruster unit, because the additional angle implies a longer retraction length.

To prevent this, Wärtsilä redesigned the entire thruster, including the inboard parts, to make the system more compact. The hydraulic retraction and steering mechanisms used on the LMT-FS1510 have been replaced by a more lightweight and compact electric system.

A significant amount of space on board has been freed up by the decision to use a single drive cabinet to control the three electric motors used for steering and retraction. When a thruster is being retracted, there is no need to steer it, and when a vessel is being steered, there is no need to retract, making a second drive redundant.

Switching to electric systems also eliminates the risk of hydraulic fluids leaking, causing marine pollution and an unsafe slippery workspace for crew, and makes the set-up easier to maintain.

Combined with improvements to the hydrodynamic shape of the propeller gearbox and nozzle, the WST-24R generates 10% more unit thrust with the same power even without the improvements in hull-thruster interaction.
(Figure 2) New patent application for retraction mechanism
The push to develop a more compact retraction system led the Drunen team to develop, and then file a patent for, a new mechanism for retracting the thruster using tension-loaded spindles.

The new mechanism has allowed the diameter of the spindles to be reduced from 330mm to 80mm to lift the same load. Because the spindles are self-locking, the new design also eliminates the need to apply external locking hooks when the thruster is retracted.

The new mechanism keeps the spindles used to retract the thruster permanently loaded under tension regardless the direction of the forces acting on the spindles. This prevents the spindles from buckling; subsequently a thinner spindle can be used for the same load. (Figure 3)

The WST-24R uses a single, specially shaped seal developed for Wärtsilä by a leading manufacturer to protect both the steering and retraction mechanisms. This means that the thruster has one less oil-to-sea interface than the LMT-FS1510, with its two seals, reducing the risk of oil leaking into the environment.

The WST-24R’s seal is essentially a rotary seal that has also been made suitable for linear motions by incorporating elements of hydraulic cylinder seals.

It is a significant improvement on both the stuffing box seals used for the LMT-FS1510 retraction mechanism and lip seals for steering.

The thruster’s streamlined, plug-and-play design means that it can be installed on vessels as a single package, taking less time and using less labour.

The thruster has been designed to be sent to yards in a single delivery, with each unit pre-assembled and pre-aligned at Wärtsilä’s factory. The thrusters are then installed and levelled at the yard, with alignment checked using a 3D laser scanner.

The thruster can also be delivered as inboard demountable unit, effectively avoiding the costs and risks associated with dry docking.

The unit is also equipped with an additional inflatable seal which is activated when the thruster is retracted, preventing any water entering inboard. The inflatable seal also allows the combined retraction / steering seals to be serviced inboard without the need to dry dock.

The composite steering support bearing for the tilted gearbox is also designed to be serviceable by divers in water.

The additional challenge implied by installing an eight-degree tilted gearbox has pushed the development team working on the WST-24R to carry out an even more complete redesign than that carried out on the rest of the renewed steerable thruster portfolio.

One month after launch, Wärtsilä is already close to entering an exclusivity agreement with a major ship owner, showing that the unit’s increased operational performance, reduced cost of installation and easier maintenance is likely to make it a popular choice for years to come.