Wärtsilä remote controls an 80 m ship from 8000 km away

It was one o’clock in the morning by the time the Captain handed over to the team in San Diego, California.

Four of them, one at a workstation and the others giving support, were at that point fully in control of an 80-metre, 4000 tonne platform supply vessel, operating 8000 km away off the coast of Scotland. Their only link was through the ship’s standard on-board communications.

“It has never been done from this distance before,” says Thomas Pedersen, Managing Director of Wärtsilä Dynamic Positioning (DP). “I believe this was the first time you have an offshore vessel ship of any significant size being controlled through a normal standard satellite link.”

Over the course of the next four hours the Wärtsilä team used the Gulfmark Highland Chieftain’s DP system to send it on a ‘box manoeuvre’, 20 m in four directions. They then used a combination of DP and joystick control to carry out a series of other manoeuvres, testing control of surge, sway and yaw, before steering the vessel for a couple of miles of its journey back to Aberdeen.

At all times, the ship’s captain and crew were on standby, ready to take the helm. But they never had to: the test, on August 21th, went entirely as planned.

“We see it as an important step towards generally remote control and autonomously controlled vessels,” Pedersen explains. “We have a proof of concept of basic control, and we have a platform to build on.”

No bells and whistles

What was most striking for Iain Huntly-Playle, Wärtsilä DP’s Director of Engineering, was how uneventful the four hours were.

“We were all expecting big bells and whistles, and to be honest at the end it was very matter-of-fact,” he says.

The computer with which Wärtsilä DP’s navigation and controls engineering head controlled the vessel from his seat in Wärtsilä DP’s San Diego offices was the same as one would have used to control it had he been on board – Wärtsilä’s Nacos Platinum Navigation, Automation and Dynamic Positioning system workstation.

The link included no significant latency, and allowed for manoeuvring the vessel as if aboard the vessel. 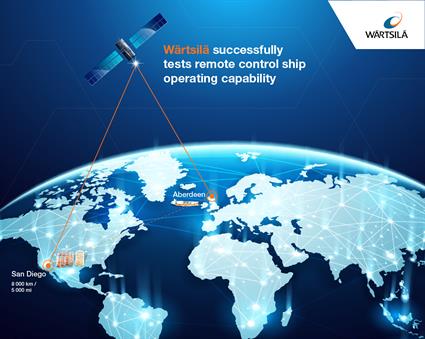 The remote control navigating station was in California while the ship being controlled was off the coast of Scotland.

To make the remote control work, the greatest challenge was developing a way to get sufficient data over a low-bandwidth connection. Huntly-Playle calls the solution Wärtsilä DP’s “secret sauce”. The team also needed to find a way to recover the link seamlessly if it was disrupted, and to make it secure to counter the risk of hacking.

With these issues now largely solved, the capability should be rolled out to Wärtsilä’s customers in the near future. The Nacos software upgrade, for instance, required to remotely control Highland Chieftain took only 30 hours to install.

“As a first step we are looking into using this capability for service purposes,” Pedersen says.

This means it will soon be possible for Wärtsilä DP engineers to take control of a vessel remotely, saving the costs of sending them out.

Excitement about remote control ships is spreading well beyond the shipping industry, with an article by Associated Press, this autumn, getting coverage in the New York Times, and other newspapers across the world. As has happened in the automotive industry, the field is being contested between established players and start-ups.

The big prize in the short term is to use remote control technology to move some crew onshore, rather than to develop a completely unmanned ship, Pedersen believes. To do this, Wärtsilä is looking at using video and laser proximity sensors.

“Basically, if you take it to an extreme, when we're sitting in San Diego controlling the ship, we should have the same situational awareness as an officer on the bridge on board the ship,” Pedersen says.

This is impossible with today’s satellite links, so Pedersen thinks ships will switch to 4G near the coast, so offshore crew can navigate through traffic, around obstacles, and into ports.

Some degree of autonomous control will also be crucial so that the ship knows what to do if the connection is lost.

Moving crew on-shore will also require changes to regulations. Pedersen believes Wärtsilä’s advantage over its competitors will grow as the industry gets closer to launch the first commercial autonomous vessel’.

“The main challenge is to have a ship that does not require maintenance while it is operating, and if you look at the product portfolio we have — the widest in the industry — that puts us in a strong position to come up with a working solution.”