Creating state-of-the-art features for Sleipnir, which will remove and install structures in the open sea, required extensive knowledge, creative thinking and open communication.

Creating state-of-the-art features for Sleipnir, which will remove and install structures in the open sea, required extensive knowledge, creative thinking and open communication.

This summer, Wärtsilä delivered the biggest steerable thruster in its new thruster portfolio for Sleipnir, the world’s largest semi-submersible crane vessel (SSCV). As a feat of engineering, Sleipnir is impressive on multiple levels. The environmentally friendly LNG-powered vehicle features two revolving cranes that can lift up to 20,000 tonnes in tandem – that’s the equivalent of the Eiffel tower.

This summer’s delivery was the culmination of a five-year effort that began with conversations between Wärtsilä and Sleipnir’s owner, Dutch offshore contractor Heerema, in 2014.

Before the project began, Heerema studied market requirements and evaluated several vessel concepts, and concluded that it wanted a semi-submersible type hull for its new vessel. Based on past projects, Heerema knew that Wärtsilä would be a reliable partner for developing innovative new solutions to meet these requirements.

“Having a direct customer [Heerema] involved in the development helped better align the development with the customer’s desires. So, we came together and said, let’s commit to doing this together,” Tiainen says. This cooperative process allowed Wärtsilä and Heerema to develop the never-before-seen technologies that made Sleipnir possible.

The underwater mountability was especially important.

“Because Sleipnir is so big, there are only a handful of dry docks in the world that a vessel this big can enter,” says Tiainen. “Thus, from a risk mitigation perspective for the customer, not having to go into dry dock for assistance is valuable.”

In addition to their unique design, Sleipnir’s thrusters are also mounted at an 8-degree downward angle. Tiainen explains the rationale: “From Wärtsilä’s research in hydrodynamics, we’ve found that this angle ensures water isn’t pushing against the ship’s hull. It doesn’t make sense to burn a lot of energy to produce water flow if it’s hitting your own vessel. This configuration — which minimises that problem — is much more efficient and effective both for moving the ship forward and keeping it stationary. With these thrusters, the ship can travel the globe fairly quickly with its own thrusters, which allows it to cover the broad geographic area that’s needed to fulfill jobs. With the thrusters, the ship can also be maintained very precisely in position during lifting jobs.” 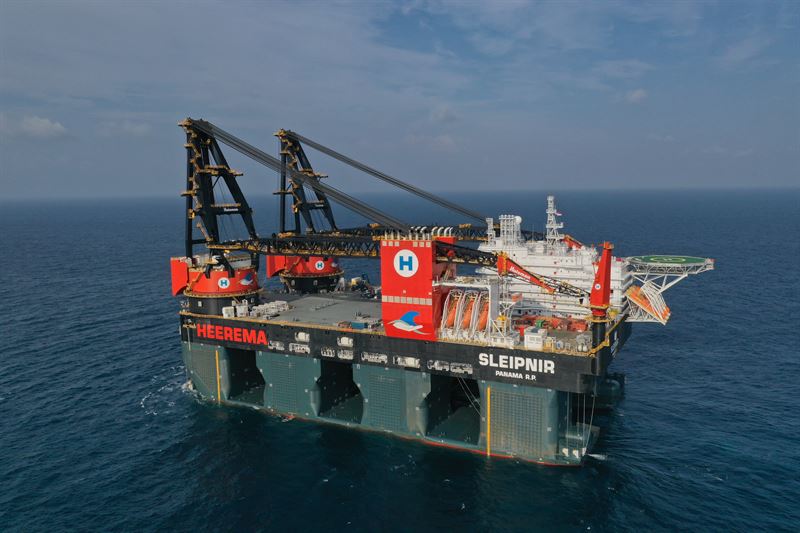 To account for the large amounts of ballast that Sleipnir takes in and the depths to which the vessel may sink (up to 32-40 metres into the baseline for the ship itself, and even deeper for the thrusters), significant R&D was needed to ensure the thrusters would remain water-free even at deep depths. Sleipnir’s thrusters are sealed with Wärtsilä Ocean Guard anti-pollution face-type seals, constantly monitored for possible leakages to ensure lubrication oil from the thrusters doesn’t enter the sea and drained for oil recycling. Similarly, sea water leakages can be drained in a controlled manner to avoid water intrusion into the thruster unit.

As the world’s largest crane vessel, Sleipnir is used for heavy lifting jobs, largely in the open sea. On 8 September 2019, it completed the world’s largest-ever lift (15,300 tonnes), installing the topsides for Noble Energy’s Leviathan development in the Mediterranean. In total, Sleipnir installed its two main topsides with a total weight of 24,500 tonnes in less than 20 hours for the Leviathan development.

“In the jobs it performs, Sleipnir must lift huge loads very precisely to install wind turbines or install big offshore platforms while fighting against constant wind and waves,” observes Tiainen. “So, the thruster system and positioning system need to work together in precise cooperation to maintain the position and avoid safety risks regarding the load that’s being lifted.”

With these challenging conditions in mind, Sleipnir was built to have the highest possible degree of system redundancy at all levels as well as dynamic positioning (DP3).

“Whatever failure happens, you won’t lose your position,” Tiainen says. “There’s a lot of extra engine capacity, and even if you lose two of the thrusters, you’re still able to stay in the same position, despite the wind and waves.”

The features ensure that Sleipnir is maximally safe and mitigates as much risk as possible.

Finally, Sleipnir has an extensive condition-monitoring system that optimises inspection and monitoring procedures towards predictive maintenance and helps avoid nasty surprises as the thrusters experience normal wear and tear. This increases predictability and reduces the risk of unexpected downtime, which according to Tiainen is important because Sleipnir is the only vessel of its type in the world. If it’s out of commission, there are certain jobs no other vessel could perform in its place.

Even though the thrusters are completed, Wärtsilä’s work on Sleipnir is far from done, as the two companies will be working together to maintain the vessel for at least the next 30 years.