Wärtsilä Electrical & Automation has carried out more than 100 installations of its container solution SAMCon for ‘cold ironing’ to connect cargo ships to local power sources at California’s ports.

A decision taken by the Hollywood movie legend Arnold Schwarzenegger in 2006, when he was the governor of California, has had far-reaching consequences for the business of Wärtsilä Electrical & Automation. The ‘Terminator’ opted to promote shore power, known as ‘cold ironing’, or ‘Alternative Marine Power’, to reduce pollution and greenhouse gases from the state’s ports. As a direct result, California became the epicentre of shore power and there was a boom in business for Wärtsilä SAM Electronics, which provides its SAMCon cold ironing container solution to cargo ships.

Cold ironing is the process of providing electrical power from the local grid to a ship at berth in a port while its engines are turned off. It allows refrigeration, heating, lighting, and other equipment to receive power as it unloads. Cold ironing provides cleaner power for ships at berth in ports by connecting them to local energy sources so they can continue to run electrical equipment while unloading. Many ships are equipped to carry out the process when built, but others have to be retrofitted. As a result of Schwarzenegger’s legislation, Wärtsilä has carried out more than one hundred retrofits for ship owners going into ports of California. Wärtsilä’s customers include major shipping companies carrying cargo from Asia and Europe to the US.

The first cases of cold ironing were in the cruise industry, in Alaska, in 2001. But LA started to use the process for commercial ships three years later and around the same time, Wärtsilä SAM Electronics produced the first container-based solution, which means installing the components required to connect the vessel to the shore power in a container and fitting it onto the ship.

Many suppliers provide only the most basic services. They supply the components required for cold ironing and the ship owners have to install and integrate them on the ships themselves. Some provide container solutions, but they don’t install the containers and equipment on the ships. In contrast, Wärtsilä’s approach involves high-level engineering from the cable reel plugs until the main switchboard, from connection on the shore to synchronisation with the ship’s network. Teams of about six engineers take care of the installation of the SAMCon system. Wärtsilä’s expertise involves onboard visits and offers different solutions so that customers can choose what suits them.

The Wärtsilä process begins with the modification of standard, empty containers. The vast majority are 40ft high cube containers, but 20ft ones are also available as an option. Wärtsilä’s team creates openings for the cables, insulates the containers and fits the components, including a medium-voltage cable reel, a cable reel control box and a medium-voltage switchboard. A container may also include a transformer, or a second cable reel for the connection to the ship, which depends on the customer’s specifications. SAMCon container features include an electric cable reel drive, including tension control, and a shore interface designed for the ports of the west coast of California and therefore IEC 80005-1. The system is made to provide up to 7.2MVA transferable power at 6600 Volts and 60 Hz.

Wärtsilä’s engineers check the vessels carefully to find the best cableways, installation possibilities, and location to install the containers. Usually, they are placed on a standard container slot above the winch deck. They are always on the outer edge – port or starboard side – of the vessel. Sometimes they are stationed in front or just behind the accommodation area.

Many customers choose a ‘bolted’ installation, meaning the cable connections between container and vessel connection point are screwed into place. This is the solution for vessel owners who intend to fix the containers in place for long periods of time. Another option is the plugged solution which requires Wärtsilä to fit a second cable reel next to the shore connection reel. The extra cables with plugs connect the container to the vessel’s connection point with installed sockets and allow customers to take the containers off the vessels at short notice. It means they can remove a connection and take the container off in 15 minutes. A third option includes adding a ‘step down transformer’ to the containers. Shore power is always 6600 volts and some low-voltage vessels have only 440 volts so a transformer is required.

Some ship owners reject the container solution and ask for the components to be taken out and fitted on board. This is because they think the ship is too small to accommodate the containers or that it might be a cheaper solution. However this approach doesn’t save money as it involves more coordination work for Wärtsilä’s engineers than installing a container and it is also less flexible. Once the large components are welded into place it is also much harder to remove them than it is to take off a container. So, when they have been fitted on board and the vessel takes a route that doesn’t offer shore power, the components tend to be left on board unused while the vessel sails around the world. 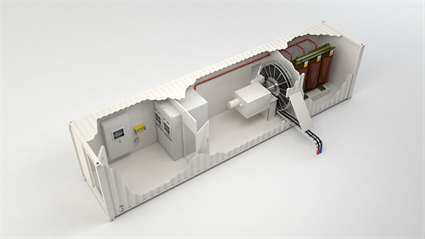 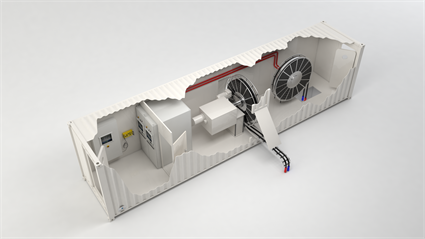 The onboard inspection takes around three hours. During the boom years of 2012 and 2013 the team was visiting vessels around the world every week, depending on where the ships were sailing. Wärtsilä has to be flexible as ship owners change routes at short notice and the teams could be asked to fly long distances. An ideal installation would be in Europe, but it usually doesn’t work out that way. Ship owners won’t want to take the vessels out of service so the Wärtsilä installation teams fly around the world to join the vessels. Wärtsilä technicians might have to fly to China, load the materials for two days, then stay with the ship to do the assembly and connection works until it reaches California.

California continues to set the pace for cold ironing. By 2020, 80% of the ships need to be ‘compliant’. A ‘compliant’ call is reached if a vessel needs less than three hours for arrival, connection to shore power, disconnection, and leaving the harbour. Few places have such a strict regulatory regime as California, however, and in 2012 the International Maritime Organisation (IMO) discussed making shore power mandatory at all the world’s ports. At the time, the IMO concluded there were not enough ports – only around 20 – ready with the technology to make it viable. 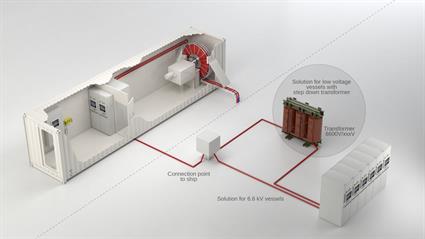 There are signs, however, that the market is opening up. Outside the US, several ports in Scandinavia are offering shore power, but they serve the ferry industry, which requires a different type of installation. Wärtsilä also offers cold ironing solutions for ferries and cruise liners. Furthermore, in Canada, the government provided USD 27.2 million to implement cold ironing in Halifax and Vancouver ports. In Europe, Sweden, followed by Germany, Belgium, Norway, and The Netherlands, have already moved towards this solution, mainly for ferry and cruise berths. Additionally, a 2014 EU directive mandates member states to implement alternative infrastructure networks, including shore power, by 2025. In the long-term, the IMO’s Marpol 6 regulations, which aim to progressively reduce the emission of fuel particulates NOx and SOx, should encourage shore power.

In Asia too, there are indications that cold ironing is becoming more common. The Chinese government has recommended cold ironing to be part of the construction for all new bulk and cruise terminals. For cargo vessels, the harbour in Ningbo has already been modified. Altogether, seven Chinese terminals are in testing mode. This year, V.O. Chidambaranar Port in Tuticorin, India, became the first to offer cold ironing.

Going forward, both China and European nations could provide more ships to Wärtsilä for retrofit. This spells good news for the company, since it can then develop and reach new markets for cold ironing.