We revisit a classic, making it better and more efficient than ever before. The upgraded Wärtsilä 20 engine comes with a host of new features, making it a great choice for marine vessels.

We revisit a classic, making it better and more efficient than ever before. The upgraded Wärtsilä 20 engine comes with a host of new features, making it a great choice for marine vessels.

In the world of big diesel engines and generators, everyone wants more bang for the buck.

In December 2017, Wärtsilä announced an upgraded version of its popular Wärtsilä 20 diesel engine which does just this – increases maximum rpms from 1000 to 1200 for mechanical propulsion engines and from 900 to 1200 for 60Hz generating sets, for instance. It is an example of doing more with less.

This technology is passed over from the already established Wärtsilä 20DF (dual-fuel) engine, which has been running at this speed from the introduction in 2011, without any issues.

With an increased cylinder output of 220 kW at 1200 rpms, the upgraded engine is a high-value-added proposition for the yards building merchant ships, and ultimately ship owners looking for lighter and more compact engine configurations to achieve higher payloads with almost the same low fuel consumption.

Because the upgraded Wärtsilä 20 engine is a refinement of an existing engine, there is also a high level of spare parts compatibility. In addition, maintenance procedures remain unchanged, a welcome development for everyone. 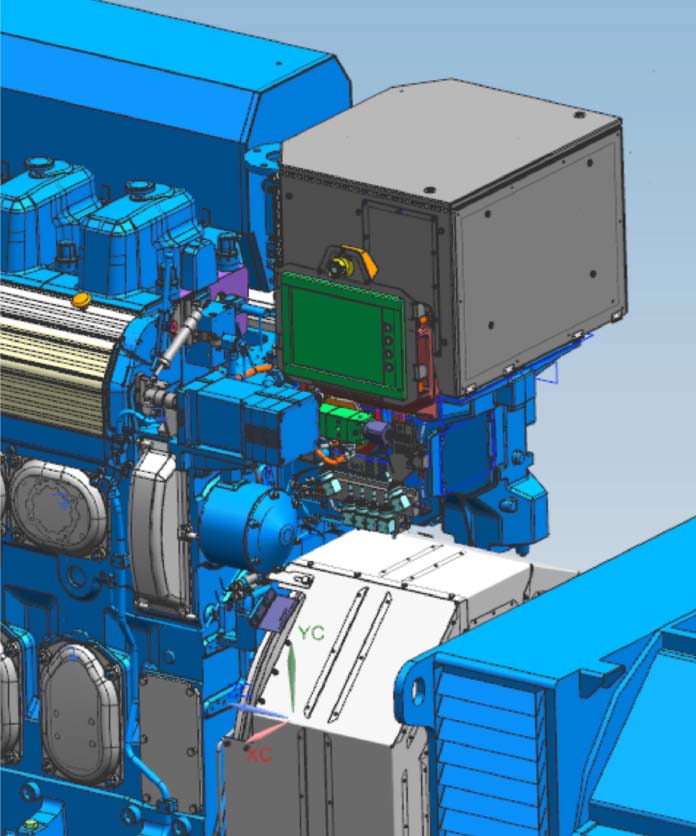 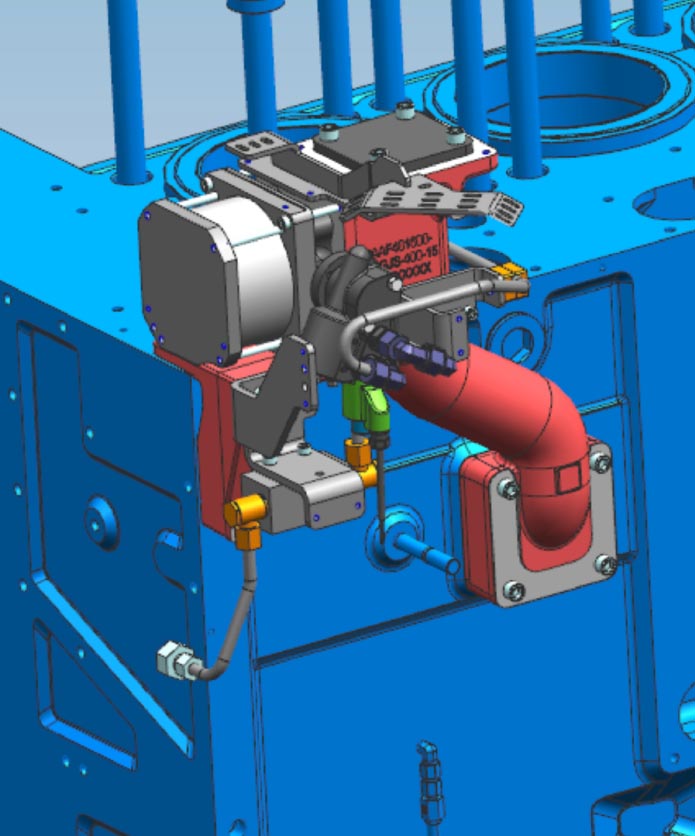 Like its predecessor, the new Wärtsilä 20, which will take two years to develop (all versions), can be used as an auxiliary engine to produce electricity on board, as a generation set for electrical propulsion, or for direct mechanical propulsion. In theory, all Wärtsilä 20 engines can be upgraded to the new performance parameters.

The original Wärtsilä 20 is a four-stroke diesel engine that can be run on light fuel oil (LFO) and heavy fuel oil (HFO). The engine can switch from LFO to HFO and vice versa without power interruption at any engine operational load. The Wärtsilä 20 has proven robustness and reliability, with over 6000 engines delivered since it was introduced to the market in the early 1990s.

The Wärtsilä 20 is especially suitable for the 1.3-2.0 MW merchant auxiliary fleet segment. It is also the perfect fit as the main propulsor in smaller ships including fishing, tugs and offshore and support vessels, and covers the lower power range within the Wärtsilä diesel engine family. The engine is fully compliant with the IMO Tier II exhaust emissions regulations set out in Annex VI of the MARPOL 73/78 convention. Also IMO Tier III compliance is possible together with a Wärtsilä NOR NOx reducer and associated equipment.

The new Wärtsilä 20 engine was officially launched at the Marintec conference and exhibition in Shanghai, China on 5–8 December, 2017.

Following is a breakdown of some of the Wärtsilä 20 new developments:

First of all, the new engine is denominated with the ‘E’ suffix indicating (as in Wärtsilä 20E and Wärtsilä Auxpac 20E) its (alphabetic, and other) evolution over previous models, with both models achieving a 10% higher output at 1200 rpms but still based on the classic Wärtsilä 20 engine design. The intention is for the Wärtsilä Auxpac 20E to replace the former Wärtsilä Auxpac 20D3/D4 as an auxiliary generator set which is, for Wärtsilä internally, an enormous reduction in complexity and spare parts handling, a cost which is naturally and eventually passed on to the customer.

The higher cylinder output will be available in 6-, 8- and 9-cylinder configurations, and due to the new automation system (UNIC 2) including a new main cabinet, now equipped with a touch screen display, will be somewhat longer (30.3 cm–37.2 cm) than previous models and will weigh between 9.3 and 11.6 tonnes.

Most of the new engine components are based on the earlier Wärtsilä 20 diesel engine with a few tweaks. 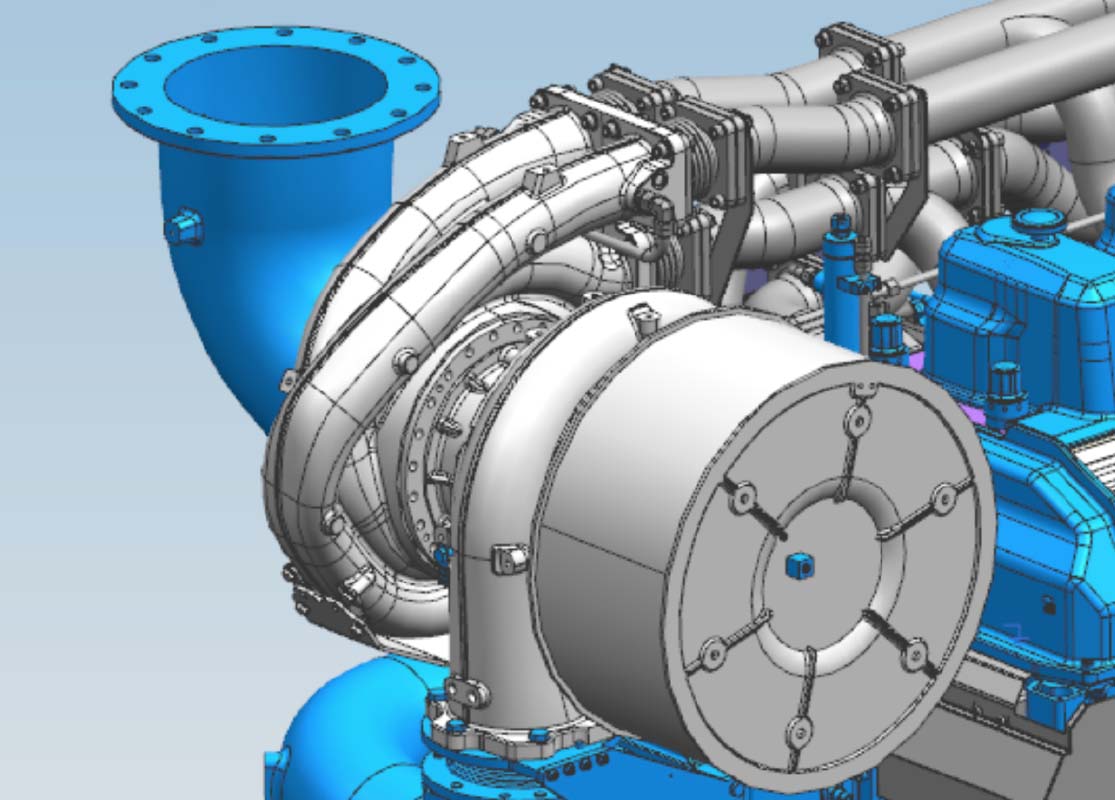 Both new engines – Wärtsilä 20 and Wärtsilä Auxpac 20 – have a Wärtsilä UNIC engine control/automation system, which is designed for the harshest environments and includes an engine-mounted control panel showing the engine’s operational data – temperature, pressure, hours, etc. – on an LED touch screen. The important thing here is that the available information is the same for the user, who will not notice any difference, but the design is improved for Wärtsilä and the interface is simpler.

As far as the actual engine block, cylinder heads and camshaft are concerned, a few new flanges and connecting holes have been machined in to allow for cooling pipes. A new injection system was also installed across the whole Wärtsilä 20 range.

The key to tweaking additional rpms and capacity on the upgraded Wärtsilä 20 stems from the turbocharger and compressor aspects where a new cooling pipe arrangement is needed to reduce the internal temperatures of the turbocharger.

Another major improvement comes in the form of a new AWG (Air Waste Gate) valve, which previously was a pneumatic system and not very accurate. The new Lisk valve is a hydraulic set-up (borrowed from the high-speed engine industry) which has improved functionality. It will also yield a longer lifespan.

Other improvements include a new cable rail for the electrical equipment, new piston rings, a new injection pump and valve.

Commonalities between the old and new engine exist because the basic design of the whole engine remains untouched.

It is also possible to retrofit a diesel into a dual-fuel unit. In these cases, required changes include pistons, piston rings, cylinder heads (with injectors and valves), camshaft and electrical equipment including brackets.