A team of divers, including some from Wärtsilä, were documenting modern shipwrecks when they discovered a historically significant wreck from almost 400 years ago.

A team of divers, including some from Wärtsilä, were documenting modern shipwrecks when they discovered a historically significant wreck from almost 400 years ago.

Sometimes the best discoveries are accidental. In July 2020 the Badewanne group of volunteer divers were searching for a sunken World War I minesweeper in the Gulf of Finland. They had examined the wreck with sonar, but when the team dived to it, they realised what they found wasn’t what they were expecting.

“The hull was wood, not steel,” says Jouni Polkko, one of the divers. “I swam to the bow and saw an old anchor windlass, so I knew this wreck was very old. I next swam towards the stern and noticed how narrow the deck was, like a Dutch fluyt. I saw the decorated portholes and how the stern rises and I knew that this was, in fact, a fluyt from the 1600s.”

“I had to keep pushing the rebreather loop mouthpiece back in my mouth because my jaw kept dropping open in awe,” jokes marine scientist and diver Juha Flinkman.

“It is an unbelievable feeling. We were the first people to see this vessel in 400 years,” adds diver Mauro Sacchi, who is Director of Business Development at Wärtsilä.

The health of the marine environment is important to Wärtsilä as part of its journey to enable sustainable societies. This is why the company focuses on developing products and services that benefit the environment as well as participates in a range of initiatives to protect marine ecosystems. Wärtsilä also encourages employees to use their own talents and interests as they see fit to help the world’s oceans.

One example of this is the group of Wärtsilian volunteer divers. They clean up marine litter with Project AWARE and document human activity on marine environments with Project Baseline. This team of divers from Wärtsilä partner with the Badewanne divers to find and monitor old shipwrecks to see if they are leaking oil.

“This is an example of how different groups can collaborate successfully,” Sacchi continues. “The Badewanne team is interested in documenting historical wrecks, while we Wärtsilä divers are focused on the environmental aspects. But all of us are passionate people who care about the Baltic Sea.” 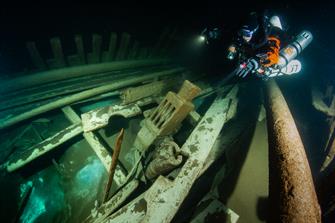 A diver explores the wreck of the fluyt

The Baltic has been a major trade route for hundreds of years. The Dutch controlled much of the North Sea and Baltic trade in the late 16th to early 18th centuries thanks to their revolutionary fluyt ship design. It was a pure merchant ship with typically three masts and a capacious hull. The fluyt had an ingenious pulley and tackle system to control the yards and sails.

The ship was common at the time, but very little information about them remains. Wooden ships quickly decompose in most of the world’s oceans, so it is rare to discover a fluyt shipwreck. The Baltic is one of the few places where a wooden ship can survive for centuries, due to anoxic conditions and the lack of wood-boring worms.

“I believe this is one of the top three ancient wrecks ever discovered in the Baltic,” Polkko says. “This fluyt is one of the most fascinating things I have seen in my 30 years of diving.”

Learning from the past

The divers immediately informed the region’s authorities and historians about their spectacular discovery. It is 85 metres down, on an even keel, and appears to have been slightly damaged by a fishing trawl. Authorities would love to learn more about the ship, but they don’t have the resources to examine every newly discovered shipwreck. This makes the work of citizen scientists like these volunteer divers doubly important.

“We want to tell the stories of those people who went down with the ship,” says Flinkman. “You get a powerful feeling of travelling back in time when you look at the ship. It is a privilege to see these things and bring their stories up to the surface.”

There is still much that is unknown about the shipwreck, but the divers plan on working with authorities to continue documenting their discovery. The ship could help historians learn more about North European trade routes, the region’s economy and how ordinary people lived their lives in the era. This was an age where sea transportation was 100% carbon neutral, something we are striving to do again.

“The cargo of this ship is under sediment, so currently we don’t know what she was carrying,” Flinkman says. “The Dutch often imported luxury items into the Baltic region, such as finer manufactured goods, cheeses, spices and wines. They exported wood, tar and hemp. However, the Dutch also sold these ships to other countries, so this could have been a vessel going between local Baltic ports with an entirely different cargo. We would like to return and find out.”