Ship owners can now have vessels that that are affordable, compliant with the IMO’s 2030 emission targets and have high operational efficiency. Meet the Ultramax 2030 65K DWT Bulk Carrier.

The all-new Ultramax 2030 65K DWT Bulk Carrier is a dream vessel that meets future emissions legislation while being optimised according to actual operating profiles both at sea and in port. This 200m ship has a range on LNG of about 13,600 n.m. at service speed which covers the main trading patterns worldwide with the LNG bunkering infrastructure available today. It gives ship owners the comfort of having more than 20% lower operating expenses (OPEX) when compared with standard vessels operating today, and has an approximate payback time of twelve years compared to a standard vessel.

“Many ship owners have asked us how to reach the coming IMO regulations for reducing CO2 emissions from shipping, so we thought of jointly demonstrating along with our business partners that even today, with the current technologies available, it is possible to achieve that while keeping the Return on Investment (RoI) in mind,” says Johnny Kackur, General Manager, Merchant & Gas Carrier Segment Sales, Wärtsilä Marine Solutions.

The Ultramax 2030 65K DWT Bulk Carrier has a 60m-tall hard sail made of Glass Fiber Reinforced Plastic (GRP) and comes in two options – a two-stroke LNG-fuelled option and a four-stroke LNG-fuelled version. Both options promise an Energy Efficiency Design Index (EEDI) of more than -46% compared to EEDI Phase 0, while maintaining a service speed of 14.5 kn. The four-stroke version utilises a Controllable Pitch Propeller (CPP) to allow a smaller installed power and still maintain manoeuvrability of the ship in adverse weather conditions without over-loading the main engine. The lower installed power not only means savings in costs, but also that the main engine can be operated at higher engine loads at higher efficiency levels.

“There are now two options for the propulsion machinery. The standard arrangement for Ultramax bulk carriers today is to utilise a two-stroke engine with an FPP (Fixed Pitch Propeller), so therefore this is still an option. The second option with a Wärtsilä 12V31DF four-stroke main engine connected to a CPP is not a standard arrangement, but it turned out to be a competitive alternative. Based on the analysis we did on the AIS data from Ultramax bulk carriers we could see that actual operation is at a wide speed range with most of the operating hours at lower ship speeds with low engine loads. The Wärtsilä 31DF engine uses a two-stage turbocharger, which in addition to increasing the engine efficiency also increases engine efficiency at part loads. The lower the ship speeds the more competitive the Wärtsilä 31DF engine option gets compared to the standard two-stroke engine option”, says Kackur.

“Various alternative fuels were considered, but LNG is today the most developed alternative fuel widely available. The use of LNG makes it possible to drastically reduce emission levels and comply with the coming emission legislations. We are fully aware that LNG may not be the fuel of choice for a zero carbon future, but we cannot just sit and wait for a perfect solution to arrive. By using the best available technology already available we can make significant progress now already,” explains Kackur.

The Ultramax 2030 65K DWT is powered by solar panels and batteries in order to produce energy in the most efficient manner. Almost all of the hatch cover area is covered with solar panels, which help to achieve higher efficiency levels.  During waiting times, the carrier can operate in an eco-mode where the hotel load is minimised, so that most of the hotel load can be covered by the solar panels only. A battery is installed to reduce engine running hours, optimise and stabilise the engine loading levels boosting the efficiency to even higher levels. 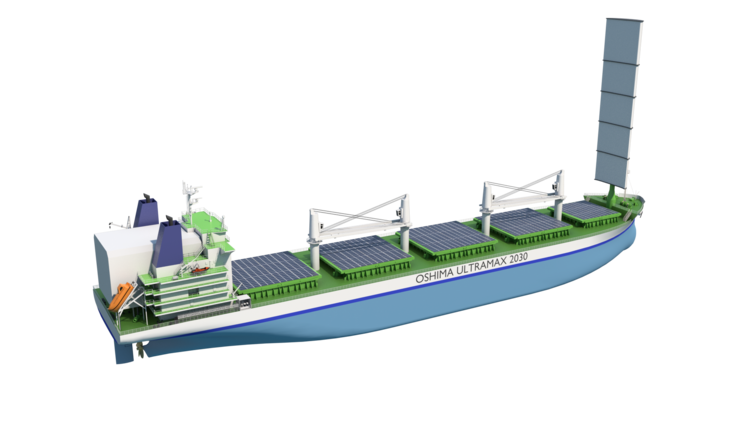 The voyage to Ultramax

Building this vessel was not easy. The process began late last year, when Wärtsilä embarked on a joint development project with Japanese ship builder Oshima and DNV GL, a Norwegian accredited registrar and classification society.  The project aimed to build a next-generation ship that would set new standards for the maritime sector. This smart carrier had to go beyond merely complying with the International Maritime Organization’s (IMO) goal of reducing every ship’s CO2 emissions by at least 40% per tonne-mile by 2030 while being cost-friendly and performance driven.

Optimising knowledge from across the industry

Each partner involved in designing the Ultramax 2030 65K DWT Bulk Carrier had a crucial role based on their specific areas of expertise. Oshima, one of the best shipyards in the world for designing and building bulk carriers, already had extensive R&D for achieving higher efficiency levels. Its current designs were used as a benchmark for the study conducted ahead of the Ultramax’s creation. Several technology options were compared and evaluated, and ultimately, many of Oshima’s own solutions, such as the hard-sail, were applied to the new ship.

DNV-GL, which has extensive experience in bulk carrier designs, offered the project access to new innovative technologies and provided many important parameters, such as actual operating profiles for Ultramax bulk carriers and the most suitable solar panel technologies for this kind of ship.

Wärtsilä contributed world-class expertise in propulsion machineries, hybrid propulsion and alternative fuel system arrangements. There was a very broad range of technologies that were considered before arriving at the final selections. For instance, both single-skeg and twin-skeg hull designs were reviewed in order to explore possibilities for improving hull efficiencies according to actual operating profiles. Solar panels were chosen, and alternative fuels including LNG and hydrogen were shortlisted together with after-treatment units for conventional diesel engines.

“We had to make sensible choices because we were also equally focused on the payback time. So even though we saw benefits with some technologies, they had to make sense in terms of the cost,” says Kackur.

These smart choices helped Wärtsilä, Oshima and DNV-GL design one of the smartest bulk carriers in the market. With legislations on emissions becoming increasingly stringent due to implications for climate change, ship owners, cargo owners and charterers need to make a shift to ecologically friendly vessels sooner than expected. With the new Ultramax 2030 65K DWT Bulk Carrier, the sector can take a giant leap towards Zero Emission Shipping.

The Ultramax 2030 65K DWT Bulk Carrier is not the only joint project Wärtsilä is developing. The company is actively looking to cooperate on design evolution and innovation, working with partners that have complementary domain expertise and can bridge gaps in competencies. Collaborations like these can help overcome challenges and bring in new technologies to create world-class solutions.

After all, the best collaborations create something bigger than the sum of what each partner can create on their own. 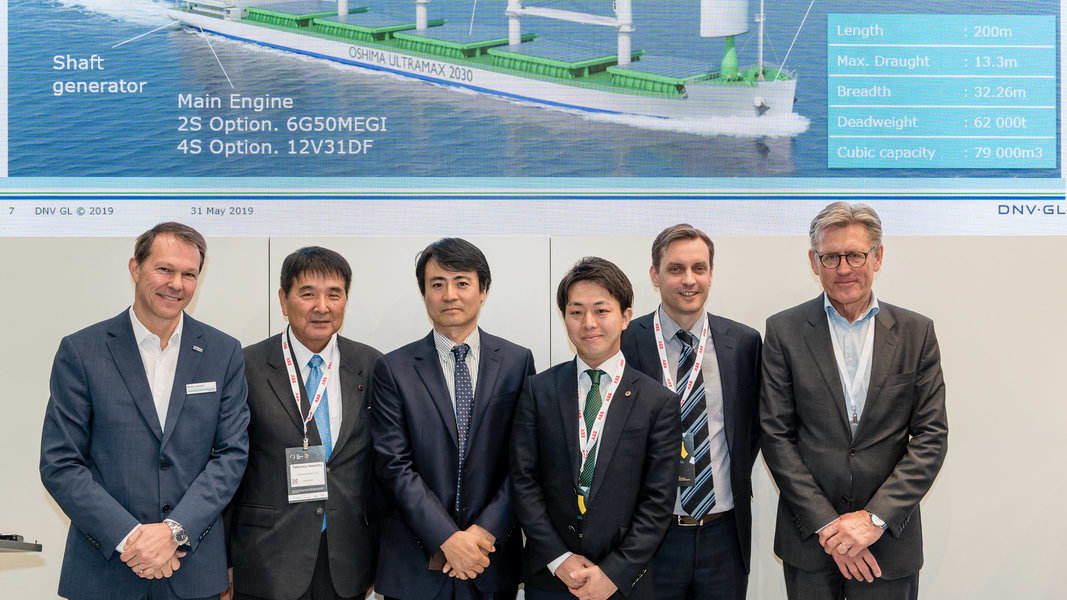