Company
Home
Insights
There’s a new ship on the horizon

There’s a new ship on the horizon

The argument for the new LNG bulk carriers, currently on the drawing boards, is based on life cycle costs and not unit prices. Despite the commodity value chain that bulk carriers represent (tonnage is the name of the game in this volume segment), the adoption of LNG as a primary fuel could change the industry forever.

The argument for the new LNG bulk carriers, currently on the drawing boards, is based on life cycle costs and not unit prices. Despite the commodity value chain that bulk carriers represent (tonnage is the name of the game in this volume segment), the adoption of LNG as a primary fuel could change the industry forever.

The aptly named Forward Shipping Company (FSC) doesn’t have any boats yet. But if all goes according to plan, their newly proposed fleet of 20 or more LNG-propelled bulk carriers will future-proof the industry into environmental compliance. There are few other alternatives.

New and looming IMO shipping standards are going into effect in 2020 to basically put a cap on NOx and SOx emissions produced by diesel and heavy fuel oil (HFO)-burning ships. The Forward Maritime Group Ltd was formed in 2013 when the Greek Arista Shipping S.A. jointly developed an R&D project with a prestigious and powerful group of industry leaders, including Wärtsilä, to promote the adoption of LNG as a marine fuel and make its use a new standard. Their research is now coming to fruition.

A letter of intent was signed in April 2018 between the Forward Maritime Group and the Jiangsu Yangzijiang Shipbuilding Group in Singapore for the construction of up to 20 Forward Bulker 84-LNG bulk carriers with deliveries between 2020 and 2023. When delivered, these vessels will be trading under the “Forward Ships” brand.

Even more newsworthy for Wärtsilä, Eniram, a Wärtsilä company, signed a memorandum of understanding (MoU) in late May 2018 with Forward Ships to assist in the development of monitoring and optimisation tools including the Energy Efficiency Design Index 2025, SOx post 2020, and NOx Tier III without any after treatment.

“We are delighted to be part of this exciting project, which will create a vessel with the levels of performance and sustainability needed as the marine industry enters a new era. Our input will help ensure operational visibility is maximised, and that the new ships operate at optimal efficiency.”

Who is the cleanest of them all?

Wärtsilä is also deeply involved in Project Forward because of its experience in LNG propulsion technologies. The propulsion design concept for the 20 new ships being developed is to be based on a novel arrangement featuring just two highly efficient Wärtsilä 31DF dual-fuel engines without additional gensets.

The new series of bulk carriers, dubbed “The Cleanest Cargo Ships in the World”, will be the first large-scale implementation of LNG as a fuel, and the most environmentally friendly. They will emit up to 35% less CO2, 80% less NOx, 99% less SOx, and 99% less particulate matter (PM) than conventional ships. Project Forward aims to take the lead in reducing CO2 emissions from shipping. Shell, a Project Forward partner, calls Project Forward’s ships a “game changer” and is ready to accelerate the roll-out of LNG bunkering infrastructure for the launch in 2020.

But it isn’t all smooth sailing.

“LNG is no doubt the way forward as it significantly reduces the enormous amounts of pollutants you get from HFO and diesel,” says Kackur. “But at the moment, LNG is not a viable fuel for the merchant fleet, meaning it is not as widely available as its alternatives. Shell is working hard on guaranteeing the supply of LNG, though. So it is a little bit a chicken and egg problem. The industry, and Arista in particular, is drawing a line in the sand with LNG.”

Currently, the existing alternatives on the market to comply with the new IMO 2020 NOx and SOx regulations include installing expensive SOx scrubbers or using even more expensive low-sulphur diesel fuel. In this constellation, LNG is also an expensive proposition in part because of the onboard pressure tanks that are required to keep LNG at -161 °C in its liquid phase, and the added expenses that are incurred while building such LNG-propelled ships.

“Like any new solution in an established industry, these extra costs have to be absorbed throughout the value chain – a higher vessel price requires a higher chartering cost, for example – and there are still many questions to be asked and answered about the commercial viability of LNG,” says Kackur.

There is always another way of looking at it.

“Bulk carriers – which carry dry bulk like coal and iron ore around the world – are the biggest single shipping segment comprising 15–17% of the world’s merchant fleet, with between 350 and 500 new ships built every year. If you can make a change here, you can reengineer the whole market,” concludes Kackur. 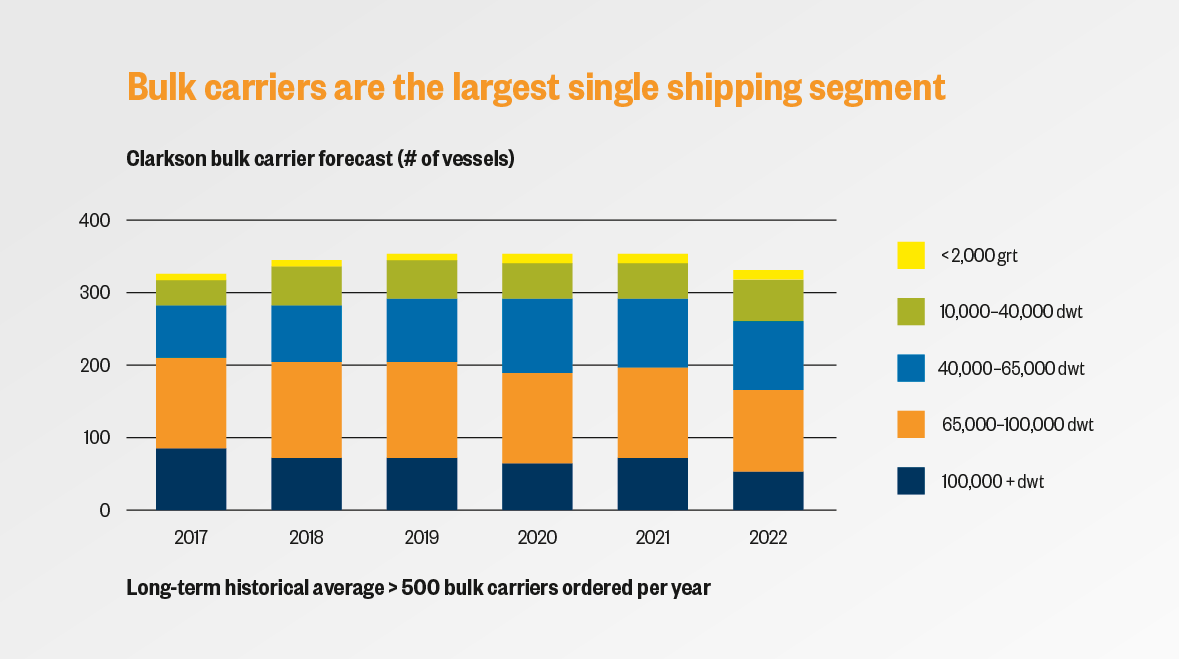 1. ABS (American Bureau of Shipping, one of the world’s leading ship classification societies)

3. GTT (Gaztransport & Technigaz, the leading engineering company specialised in the design of membrane containment systems for the maritime transportation and storage of liquefied natural gas)