The rising costs of climate change

The economic impact of volatile temperatures and extreme weather is becoming increasingly significant.

The economic impact of volatile temperatures and extreme weather is becoming increasingly significant.

The year 2020 was the second warmest on record. It also saw a record-breaking 22 natural disasters that cost over USD one billion each – six more than any other year recorded. For comparison, the 2010s averaged 12 such disasters per year and the 2000s averaged six per year. The financial impact of the climate crisis is becoming ever-more pronounced for states, industries and individuals alike, and it could get worse as the earth continues to warm.

Scientists at the United States Environmental Protection Agency (US EPA) note that estimating the impact of climate change and its associated costs is challenging due to the difficulty of separating damages that are caused by natural variability in the climate system from those that were made more frequent or intense because of climate change. However, there is strong evidence that climate change contributed to certain events in 2020, including the wildfires in the American West and Australia and the strength of Atlantic hurricanes.

Dr. Kathleen Miller, a Senior Research Associate at the National Center for Atmospheric Research says that warming temperatures affect the water cycle, which causes other problems. “The warmer it gets, the more readily water evaporates, and a warm atmosphere can hold more water. You’ll see a combination of effects: heavier precipitation events and more intense droughts, as well as other knock-on effects on water quality,” she says.

Kari Hietanen, Executive Vice President for Corporate relations and legal affairs at Wärtsilä, who also leads the company’s sustainability team, says that while not all catastrophic events can be linked directly to climate change, it plays a critical role.

“There have been scientists looking into this, and one conclusion is pretty clear. The warming of the world raises the risk of catastrophes, and scientists have come to the conclusion that if the temperature increases more, the impact of the cost is more,” Hietanen says.

“There is a scenario that says an increase in 2 degrees would mean half a percentage of GDP. But it’s disproportionate. A 4-degree increase would be a 2% decrease in GDP, so the impact increases with the temperature increasing.” 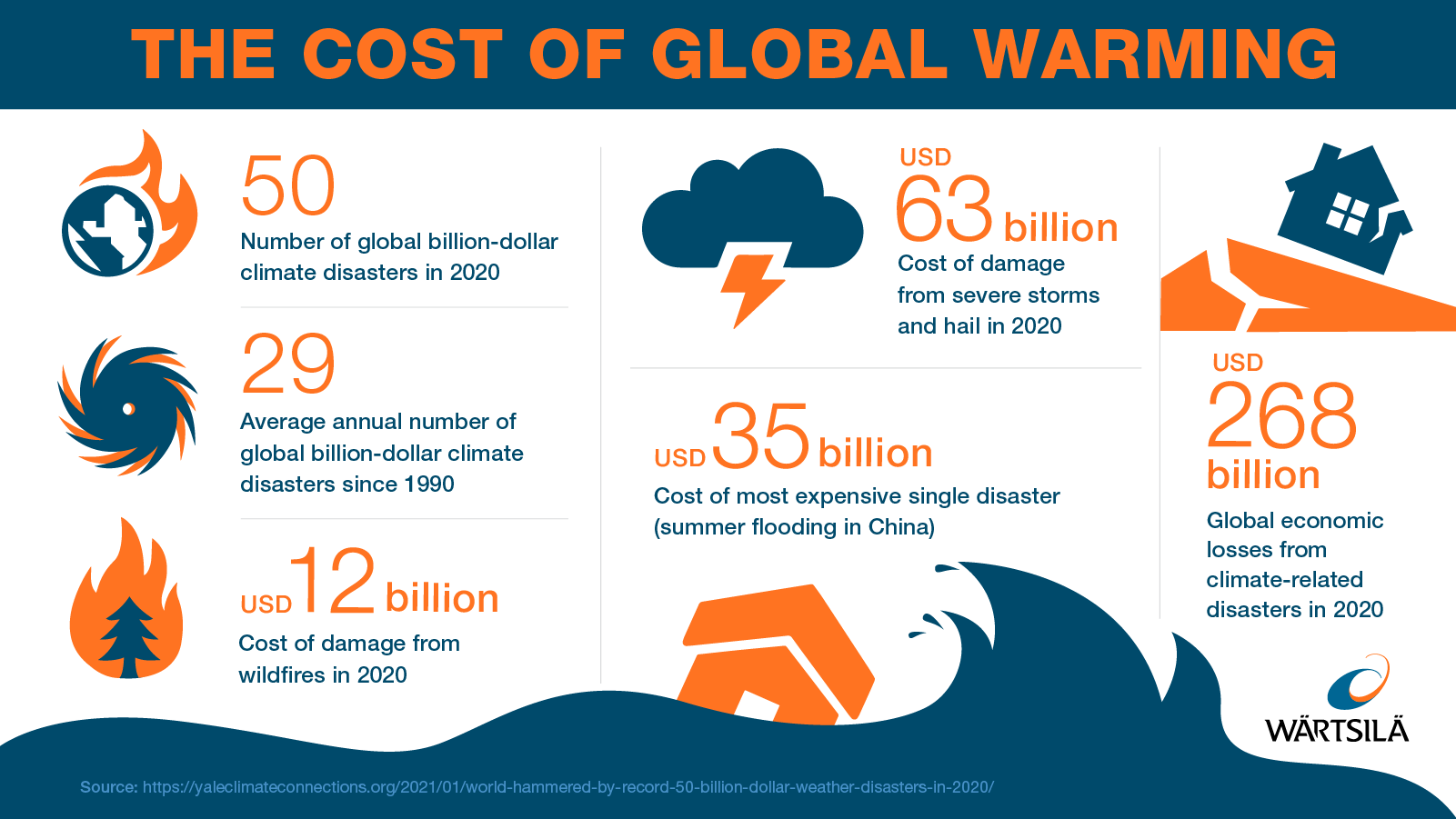 There is significant variability in the potential costs of climate change, particularly if carbon emissions are not addressed. According to US EPA scientists, projected damages could range in the hundreds of billions annually by the end of the century under a high emissions scenario; however, projected damages would be substantially lower if adaptation measure were put in place and emissions decreased.

The potential costs are also not distributed equally.

“If you happen to be in low coastal areas, climate change may catastrophically affect your budget because you may lose your home,” says Hietanen. “If you are a farmer in an area where you can’t continue farming, you may lose your living. If you’re in an area that may get more rainfall, the impact may be zero or even positive… It’s maybe fair to say that areas which are already rather dry, or areas where the average income is lower, will be hurt the most.”

Marc Conte, an Associate Professor of Economics at Fordham University adds that wildlife is also affected by climate change.

“Extreme events are a challenge to humans, but also to plants and animals, with flooding, increased droughts, and heat waves and wildfires that destroy habitat for these species. Many animals aren’t able to escape fires at the rate they’re traveling. One of the tragedies with the Australia wildfires was the loss of wildlife. A number of populations were decimated by those fires,” says Conte, who recently received a National Science Foundation grant to assess the cost of climate change impacts on plants and animals. “On an emotional level, this is tragic. From an economic perspective, this loss of biodiversity is a cost to society, because these habitats and species provide value to people in numerous ways that might not easily be replaced. Clear examples include the pleasure of hiking through those forests or going bird-watching for the birds that lived there. This impact on wildlife through extreme weather and natural disasters is partly due to climate change.”

Even when climate change does not catastrophically affect people’s livelihoods or housing, it can still deal a painful blow to budgets. Summer Williams, a resident of Chicago, Illinois, saw her utility bill quadruple this winter due to record-breaking snow and unusually harsh temperatures.

“My utility bill went from USD 30 to USD 117. My bill for February was USD 117.53; that’s because February was harsh. In January, my bill was USD 84.00. It was so bad in Chicago that Lake Michigan was frozen, and I believed it because of how I was feeling in my apartment.”

The financial strain is dire. The question for many people becomes: “rent’s due in a few days. Do I pay rent or beg my landlord, or do I pay my heating bill?”

As climate change’s negative impacts become ever-more pronounced, properly accounting for its costs will be integral to informing policy and economic decisions to curb its progress and offset its effects. Understanding—and properly accounting for—climate change’s far-reaching costs will make the need for sustainable lifestyles supported by advanced technology and infrastructure solutions evident.