The life aquatic with William Winters

Underwater welding is one of the world’s most extreme jobs. William Winters, heading Underwater Services at Wärtsilä, knows the thrills of the great unknown and the perils of working in daunting undersea conditions.

Last winter, a containership found itself stranded in the middle of the Baltic Sea. As it was pulling out of port, the propeller blades were damaged by large chunks of ice, leaving the unwieldy giant unable to move an inch further.

This is the kind of emergency in which Wärtsilä’s diving team is called to the rescue.

Wärtsilä acquired the Dutch company Trident B.V. earlier this year to strengthen its portfolio of Underwater Services. Specialising in ship repairs and maintenance, the company is a leading worldwide provider of commercial diving services.

After the call came from the Baltic, Trident immediately mobilised a team of divers who arrived within hours to straighten the broken propeller in-situ with their largest hydraulic straightening press. The vessel was on its way again by the next day.

“A lot of our business is last-minute, so we need to react fast to keep our clients’ ships moving. We also perform standard ship husbandry, including tasks such as propeller polishing, but we excel on the repair side,” explains William Winters, Managing Director of Trident B.V.

Winters was first bitten by “diving bug” at the age of 16 while working as an assistant scuba instructor in Bali, Indonesia. He gained his licence in Scotland, and has been diving commercially since 1998. His growing workload as general manager recently forced him to hang up his diving gear in exchange for a suit and tie.

“But I miss being out on projects with the team. The work is highly varied and it is great fun travelling all over the globe. Just last week we had personnel on jobs everywhere from China to Brazil. Besides the exotic locations, the work itself is very exciting,” describes Winters.

For Winters’ diving teams, there’s no such thing as a “typical” day. The divers carry out a variety of tasks ranging from complex hyperbaric repairs to exchanging complete tunnel thrusters. Although some jobs are scheduled in advance, each day brings new surprises.

“I can tell you it’s a recipe for busy, exciting work days! But ship schedules can interfere with personal plans, so the unpredictable nature of the job is both a pro and a con at times.” 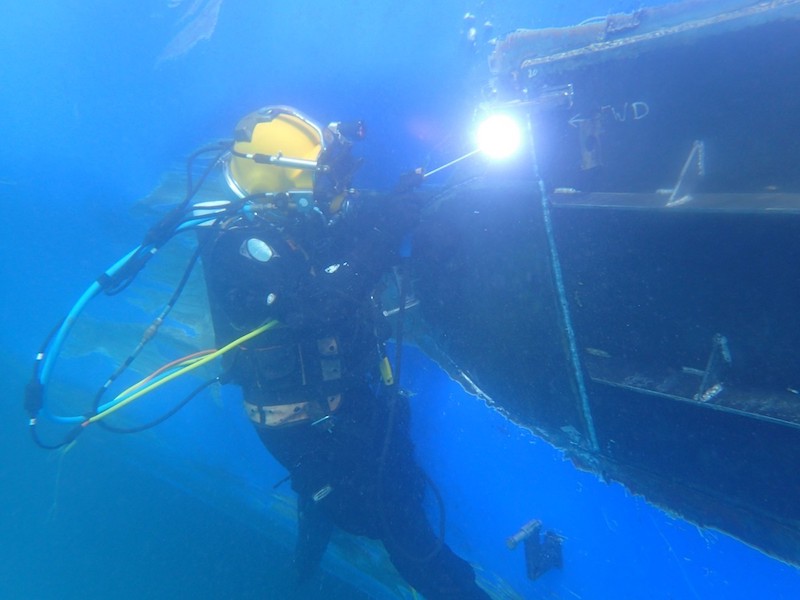 The divers carry out a variety of tasks ranging from complex hyperbaric repairs to exchanging complete tunnel thrusters.

Underwater work is said to be one of the world’s most dangerous occupations. Diving pushes the body to the extremes permitting no mistakes with capabilities or equipment. Added to the risks, poor visibility in muddy waters can make the task difficult to perform by blocking visuals.

“I wouldn’t call the job dangerous. We’re trained professionals working with the right equipment and following the proper procedures. The diver is always connected to an umbilical via which we have a four-way open communication system, a video feed and two independent air supplies,” explains Winters.

“The diver additionally carries a bail-out bottle in case of emergencies. Flying a plane would be just as dangerous without the correct equipment.”

When asked to describe his most memorable dive, Winters is spoiled for choice: “Tough question! I’ll certainly never forget working in -30°C conditions off the East Coast of Canada. An icebreaker had to come in every morning to make a hole in the ice for us. I’ve also had challenging jobs working in West Africa, Indonesia, Singapore, Tahiti…the list is endless.”

The Trident-originated team is excited to embark on new adventures as part of the Wärtsilä family. “We share the strong customer focus. After 2.5 months, I can see that there are great synergies between us. We look forward to getting to know the family better and growing the business together.”