Company
Home
Insights
Taking renewable methanol to the next level

Taking renewable methanol to the next level

Winner of the SparkUp Challenge, Carbon Recycling International (CRI) is working together with Wärtsilä on practical applications for their renewable methanol solution. A team from Wärtsilä travelled to Iceland to start feasibility modelling and scout for locations for an industrial-scale facility. We get you a ground report.

Winner of the SparkUp Challenge, Carbon Recycling International (CRI) is working together with Wärtsilä on practical applications for their renewable methanol solution. A team from Wärtsilä travelled to Iceland to start feasibility modelling and scout for locations for an industrial-scale facility. We get you a ground report.

“The next phase is to agree on the potential project size and find the best location for an industrial-scale facility,” says Rautkivi. “This is not a question of when this is going to happen, but where.”

CRI snagged the top prize of a capital grant of EUR 50,000 and beat out nearly 70 other competitors earlier this year in Wärtsilä’s SparkUp Challenge, a vehicle for accelerating collaboration with start-ups and scale-ups in order to realise Wärtsilä’s vision of a 100% renewable energy future.

CRI is scale-up, not a start-up, founded in 2006 in Kopavogur, Iceland that uses renewable energy to produce synthetic methanol from carbon dioxide and hydrogen.

According to Stefánsson, the first meeting was held with three objectives: “To better understand what CRI has to offer, see our renewable methanol pilot facility in operation, and together evaluate the commercial feasibility related to synthetic fuels.” 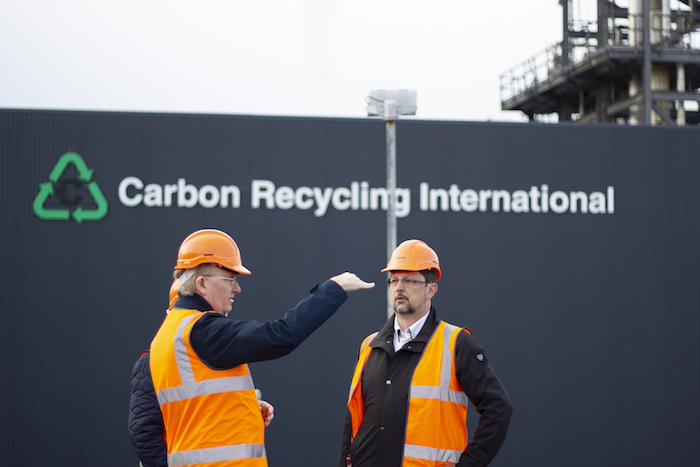 While the technology for CRI’s process is ready, says Stefánsson, the challenge is to scale-up carbon neutral synthetic methanol production volumes to meet global fuel needs in a feasible manner.

“With synthetic methanol, the more important factor is the availability of ingredients,” says Rautkivi. “We need to have cheap electricity and CO2 available and usage for methanol. These factors are defining scalability today.”

Scaling up is, of course, necessary in order to reach the lowest production cost and be successful in the market.

CRI’s Stefánsson says that the scalability of their technology is almost limitless. “Fortunately, or rather unfortunately from a climate perspective, there’s an abundance of CO2 currently being emitted by industry that we can feasibly turn into liquid fuel and chemical feedstock. There are, of course, some constraints on the availability of energy in each given location, but globally speaking this will not be the limiting factor,” he explains.

Missing piece of the puzzle

CRI’s inventive solution is so important today, says Rautkivi, because it’s essential to find solutions that decarbonise the world.

“Wärtsilä’s energy vision is a 100% renewable world and this project clearly supports that goal,” adds Rintamäki.

“Our future vision is that renewable methanol, which is an excellent fuel for internal combustion engines as well as fuel cells and a building block for other fuels and chemicals, will be the preferred energy carrier for hydrogen and electricity from renewable sources,” says Stefánsson.

“The main objective, we can agree, is to leave oil and gas in the ground. The limited resource is not fossil fuels, but the dwindling ability of our atmosphere and oceans to absorb an excess of greenhouse gases released by human activity. Our technology is one of the missing pieces in the puzzle of how we can achieve a rapid and massive reduction in global emissions while supporting vital economic activity and the transport of goods and people,” sums up Stefánsson.