In February 2018, PortCall.com and KNL Networks were announced the winners of Wärtsilä’s SparkUp Challenge. Their innovative business models in the arena of smart marine systems helped them seal the deal. We find out how this collaboration is faring.

In February 2018, PortCall.com and KNL Networks were announced the winners of Wärtsilä’s SparkUp Challenge. Their innovative business models in the arena of smart marine systems helped them seal the deal. We find out how this collaboration is faring.

The Wärtsilä SparkUp Challenge, launched in November 2017, was best described by Alid Dettke, Vice President, Digital Innovation, as a ‘courtship’.

As in any dating scenario, the ‘couples’ event in Helsinki actually started as a mingle where promising start-ups with grand ideas about smart shipping were invited to pitch their ideas to Wärtsilä’s experts.

“There would be dating and a period of getting to know each other first, followed by further compatibility exercises to ascertain whether the couple should move in together. However, since the SparkUp venture client model is only a year old, it is still too early to make any predictions about the success of the individual collaboration projects leading to marriage and starting-a-family part,” says Dettke, explaining Wärtsilä’s five-level Venturing Model for collaborating with external start-ups and growth companies.

The first challenge attracted more than 150 entries, of which 11 were chosen in February 2017 to go to the next phase. This was thanks to the compatibility of their ideas with Wärtsilä’s own vision of a Smart Marine Ecosystem based on new ways of collaboration and smart technology.

In February of 2018, at SparkUp Smart Marine Challenge Day hosted in Helsinki, two companies were found to be a perfect match – Oulu/Copenhagen-based KNL Networks, and Durham/North Carolina-based PortCall.com. 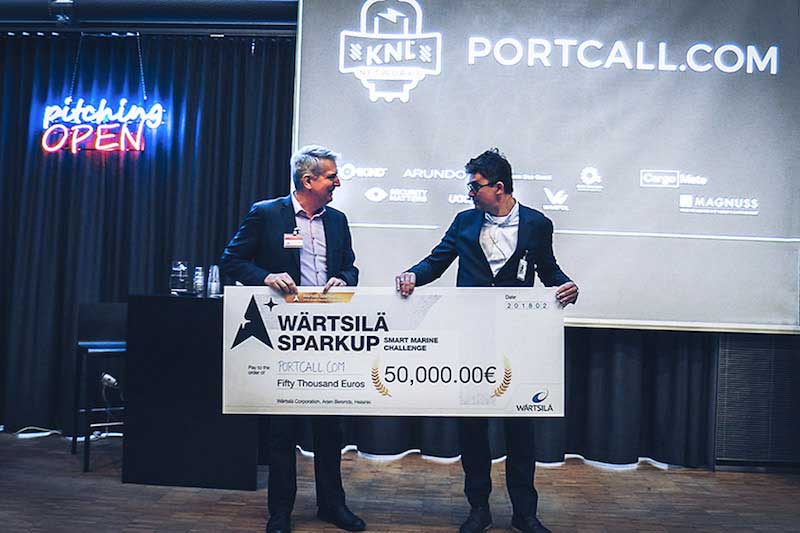 From Honolulu to Helsinki

“Thanks to this SparkUp Challenge, we now have the opportunity to grow in ways we never would have thought possible,” says Bryan Bender, CEO of PortCall.com, and a former ship captain from Honolulu. He teamed up with a former US Coast Guard officer, as well as computer engineers from Harvard to start PortCall.com.

PortCall.com is an online scheduling system to streamline the process of a ship’s port call, including booking and coordination of a berth, agent, pilot, and other port services. Different ports worldwide are currently using PortCall’s services.

“Our goal with Wärtsilä is to connect their smart ship systems to the port and enable true, just-in-time arrival scheduling and coordination,” explains Bender.

The SparkUp Challenge’s other winner - Toni Linden, CEO of KNL Networks says: “We see ourselves as being an integral part and enabler of Wärtsilä’s digital transformation. This is a huge thing for us and Wärtsilä.” If PortCall.com and KNL Networks were concentric circles around Wärtsilä’s Smart Marine Strategy, KNL Networks could be considered a true enabler in orbit since its business focuses on providing ship-to-shore connectivity for real-time, machine-to-machine, data streaming services. Connectivity is a central topic in Wärtsilä’s digital acceleration.

“We are enabling business from smart data,” says Linden, a Finn who moved the company’s headquarters to Copenhagen in the summer of 2018. “There is no other existing Internet of Things (IoT) system out there that monitors engines in real time, no matter where the ship is in the world. To do this, we’ve reinvented the shortwave radio. We offer dedicated channels for connecting the millions of devices sailing out there with the system that’s more secure and reliable than any other solution available. By using radio instead of more expensive satellite communications systems, we can offer access to data at a price that allows other digital products and services.”

KNL Networks is backed by venture capital and, according to Linden, has a business model that could easily be expanded to include a wide range of other companies.

“Our collaboration with Wärtsilä was a great validation of what we are doing and already this year we have increased our revenue tenfold,” says Linden.

PortCall.com is an equally important part of Wärtsilä’s smart marine ecosystem. The plan going forward is to study and implement further ways in which PortCall.com’s offering could be integrated with Wärtsilä’s portfolio. Several synergies have been identified already, such as the integration with PilotPro, the iPad-based Pilot Personal Unit developed by Transas.

“It’s been a really good experience. We really appreciate how welcoming Wärtsilä has made us feel. We are a small company of only five people sitting down with a giant company comprising 18,000 people who has made us a valuable part of their team and are allocating resources to us. This is definitely a long-term partnership where we see many synergies and validations with each other. We are a good fit.”

Ready for the next round?

Neither of the two companies has gone through Wärtsilä’s five-level venturing model in its totality – but that is also not the intention of the model. In fact, start-ups can enter at any level depending on their maturity stage and how much they are able to commit to Wärtsilä.

That said, thinking of marriage (or an acquisition) with the SparkUp Smart Marine winners is just too early to tell. Stay tuned for Slush Helsinki 2018, the leading start-up event with over 20,000 attendees, 2,600 start-ups, 1,600 investors, and 600 journalists where Wärtsilä will be showcasing the fruits of the SparkUp collaboration.

In the meantime, Wärtsilä would like to encourage more collaboration with innovative companies in the ongoing SparkUp Smart Energy Challenge which is focusing on Power-to-X solutions to support the transition towards 100 percent renewable energy. There’s still time to enter until October 31, 2018 at ventures.wartsila.com.