Today, large diesel and gas engines face an abundance of different loading conditions, in both energy production and marine applications. Hence, the importance of being able to accurately analyse these loading conditions is constantly growing. The goal of this article is to introduce the possibilities of coupling electrical and automation system models with flexible multibody dynamics to enhance and optimise the engine design for varying loading conditions. This article is based on the award-winning paper “Simulation Based Grid Compliance,” published at the CIMAC 2016 World Congress by J. Könnö, T. Frondelius, T. Resch and M. Santos-Descalzo. Please refer to that paper for further details on the methodology.

In field operation, generating sets are often subject to highly fluctuating loading conditions and anomalous phenomena imposed on the generator by the electric grid. Examples of such events are unstable grids with possible short circuits, heavily varying loading in peaking power plants, or frequency fluctuations in small power grids. Typically, the performance of the generating set for unstable grids must be demonstrated by fulfilling certain grid compliance requirements. Such tests are typically dictated by legislation and aim to assure that the generating set stays connected to the grid in the case of a transient event, such as a short circuit or an unwanted breaker opening in the grid. A typical example is to show that the generating set stays in the grid during a short circuit of a few hundred milliseconds.

For the operator, this translates directly to increased uptime of the power plant and increased reliability in energy production. On the other hand, running through such heavy transients imposes elevated load levels on the engine and generator components. To guarantee that a given engine will perform under all possible loading conditions during the operational life, simulations are the only viable choice to assure that such elevated loading does not affect the component lifetime negatively. Similarly, understanding and being able to simulate such events helps us to better design the equipment for specific customer loading conditions and business demands.

Although grid compliance issues are typically related to power plant applications, one faces very similar challenges in marine applications as well. In the marine operating environment, the internal grid of the vessel is small, which also leads to highly fluctuating loading conditions, particularly in special applications with highly varying power output demands, such as dredgers. Adding to the complexity are installations where there is both mechanical propulsion and electricity generation coupled to a single engine. In such conditions, the generating sets should be able to respond to the load changes rapidly enough to avoid destabilising the vessel electrical system. In addition, hybrid applications are becoming more common, further underlining the need for modelling. Moreover, in marine applications, safety typically plays a key role. As well as providing the best possible economic output through increased efficiency to the vessel operator, tightly coupled mechanical and system simulation models help in assuring the safety at sea of the equipment – even under the most severe loading conditions.

Interplay of the electrical network, automation and multibody dynamics

In this test case, we take a closer look at the 20-cylinder Wärtsilä 32 engine. This is a typical engine used in power plant installations, usually comprising several such generating sets. When coupled to a small grid, such as on a stand alone island application, the interplay of the generating set and the control system becomes one of the determining factors of the genset performance. Consequently, understanding the coupled transient behaviour is of utmost importance when designing generating sets for such demanding conditions. Typically, a generating set, after reaching the target speed, runs at a constant speed to produce electricity of a constant frequency. It is essential for the frequency of the electricity to remain as close as possible to that of the grid to ensure it stays in synchronisation with the grid. As the generator rotor and crankshaft are directly connected by a flexible shaft system, any higher variation of the crankshaft speed induces a variation of the rotor speed and, consequently, of the induced magnetic field. Such variation can come, for example, from an unwanted variation in the cylinder pressure or from a non-constant electrical grid. Therefore, even for a demanded constant speed, the rotor speed needs to be controlled by manipulating the injection quantity and ignition timing.

To accurately simulate transients, such as whether the generating set will survive a short circuit without falling off the grid, one needs to consider the engine mechanical model as a coupled model with corresponding automation and electrical models. Consequently, this coupled model will not only serve the needs of mechanical simulations, but it can also act as a testbed for more refined control system development in a virtual environment, thus delivering better solutions to the customer in a shorter amount of time. In the daily operation of a generating set in a power plant or marine installation, such high transient effects play an important role and are demanded to be considered in the development of the engine control system.

To cover such effects as described above, a highly complex system, covering the correct signal flow and controls, is required. But, as the simulation targets are still component durability, bearing analysis and vibration control, the considered sub-systems, structures and their interactions must also stay on the complex 3D level. A simplification of the mechanical model, as used for pure signal-flow simulations, is simply not valid for this type of simulation. Therefore, the next step in virtual development and validation is a virtual model for multibody simulation coupled with control systems and an online load generation algorithm. The target is to simulate how the whole generating set responds to predefined network events, such as short circuits, to satisfy the needs and requirements discussed above. 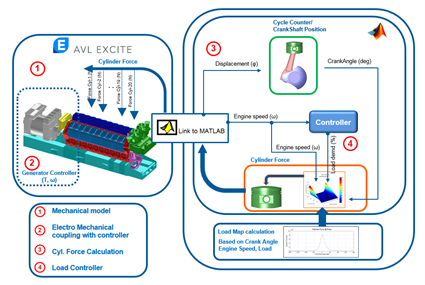