New technology is usually synonymous with ease and convenience. However, digitalisation has earned a certain amount of bad rap in some seafarer circles. Rather than simplifying the job, it’s sometimes perceived as an added burden — one more task in an already busy to-do list.

“Speaking as a seafarer, many digital solutions today do not do their job properly. That’s because they weren’t designed with the full picture of how they are going to be used, by whom, under which conditions, and ultimately, what results would they achieve,” says Hendrik Busshoff, Product Manager - Autonomy at Wärtsilä Voyage and an experienced mariner himself.

“Sometimes products are pushed based on KPIs, without considering how it’ll play out or get implemented onboard. Plus, many concepts are introduced half-baked and are glitchy. Thus, get a half-hearted reception from the crew.”

“Because the crew doesn’t always trust the new tech to deliver up to their expectations, they keep running old processes in parallel, which increases the workload. And all this turns into a vicious circle of negative reinforcement towards new technology,” explains Busshoff.

So, how do we fix this as an industry?

First, ensure robustness of solutions that live up to the expectations and integrate into the ship’s ecosystem easily. Second, don’t leave at just installing a new system; iron out the implementation process as well, which includes a plan for phasing out the old tech.

That said, when executed well, one can already see examples of how digital solutions make life on board less complicated and safer.

One system to rule all

Not multiple screens, but integrated systems! Rather than adding another device to the list of equipment onboard, some smart solutions tap into the existing resources. They synergise — interconnecting all functions under one integrated system — to achieve maximum efficiency.

Wärtsilä Voyage’s  FOS (Fleet Operations Solution) is a good example of that. It starts by automating and amalgamating information that already exists on the ship — combines all navigational processes and data, including route planning, weather and met-ocean data, on a single platform (the ECDIS), enabling collaborative voyage planning. FOS also analyses navigational information from the bridge (position, course, speed, etc.) and delivers smart docking assistance during berthing and mooring on ship wings. 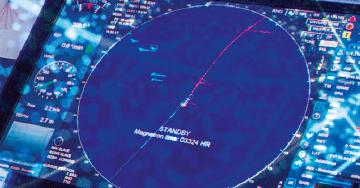 For BW Epic Kosan (previously Lauritzen Kosan), this integrated optimisation resulted in an astounding improvement in their voyage planning. The LPG carrier company, which installed FOS on their entire fleet of 26 LPG vessels, noted a 75% reduction in time spent planning voyages. This naturally translates into a dramatic improvement in the crew’s workload, boosting morale and productivity while reducing fatigue risk.

Moreover, FOS connects via cloud to the ECDIS, a system that most crew members are already familiar with. And so, it’s super easy to implement.

Another common infliction onboard are the time-consuming reporting and compliance — avoidable administrative tasks that a software can easily take over.

The crew should be busy making critical decisions on the ship, not punching in numbers.

But currently, an awful amount of their time goes in aggregating, verifying and plausibility checking data.

Take, for instance, the many fleet performance programs that rely on someone reading values from a GPS log and then typing them into an excel sheet. Then, again someone onshore takes that data and re-logs it manually onto their database.

With digital solutions, like FOS, the entire process becomes much less labour-intensive as you get a direct feed from the device where the information originates. It acts as a transparent and fully integrated network for ship‑to‑shore communication that’s attached to your ECDIS. So, the chances of human error go down, data quality goes up, plus the crew has more time to concentrate on critical decision-making — a much better utilisation of their skill sets and time.

Also, it is not always about compliance but creating conveniences and better efficiencies. Like the virtual fuel flow meter that estimates energy consumption without needing an actual flow meter. It collates data from manual reports and FOS's energy optimisation modules (the Compliance and Reporting, Voyage and Ports, and Hull and Engine modules) to calculate on-the-spot fuel consumption of a vessel, thereby, helping with better voyage planning and reduced workload.

Smart technologies can be a seafarer’s most reliable assistant, especially in situations where human senses are limited or even fail.

Think how smart sensors (such as radars, night vision cameras and lasers) amplify the crew’s senses and make shipping safer. Then, intelligent algorithms collect and crunch data from various sources and present them in a format that helps the crew make better decisions.

The IntelliTug is one example of how we do this. The human-centre smart navigation systems onboard the IntelliTug enhances the tug master’s situational awareness and contribute towards the safety and efficiency of operations in the Port of Singapore, one of the busiest container ports in the world.

The IntelliTug uses a combination of smart sensors and sensor fusion which functions as an extra pair of eyes, and this aids the tug master to sense and navigate better, even in the most challenging weather condition. If there is a risk of collision or close-quarter situation, the tug master is alerted well in advance, minimising the risk of accidents.

In certain situations, the system also assists with some of the cognitive tasks to optimise operations. The smart systems onboard the IntelliTug, for instance, aids the tug master through optimised and intelligent passage planning, whilst the virtual anchoring system assists with standby manoeuvres.

Ultimately, semi-autonomous solutions, such as auto-docking, helps the crew achieve new levels of consistency, accuracy and precision, in every trip they take.

American Steamship Company's (ASC) MV American Courage, the largest ship ever to perform automated docking and dock-to-dock transit, is a compelling case in point. The 42-year-old vessel was retrofitted with Wärtsilä Voyage's latest SmartMove Suite technology as ASC wanted to enhance safety to its operations on what Native Americans call the Crooked River.

The winding, often narrowing Cuyahoga River in Ohio, US has a part which is officially named the "Collision Bend". On top of that, it is heavily congested, winged with numerous buildings, 22 bridges and a nearby population of two million, making it by far the most challenging shuttle routes in the Great Lakes. To move a vessel that operates seven days a week carrying a load of 24,300 tonnes of iron ore on this waterway. Practically, there’s no room for error.

The idea was, therefore, to install an automated dock-to-dock transit solution that can assist the crew at every step and conduct every trip safely.

“The advanced decision support system automates repetitive tasks, such as docking on repeated itineraries, allowing the navigation officers to focus their bandwidth on the parts of the operation which require attention from the astute human,” explains John J Marshall, Senior Business Development Manager, Automation & DP - Americas, Wärtsilä Voyage, in an earlier article.

As the American Courage case highlights, solutions like SmartMove can upgrade the crew's capabilities dramatically to improve safety, efficiency and productivity even on the trickiest water.

Technology has always supported seasoned mariners in their pursuit of making the oceans safer and easier to navigate. Digitalisation and cloud-tech are doing so at an unprecedented pace.

The correct way to adopt new tech is to understand the core problem, find the right solution for it, implement without hedging, and then gradually kiss goodbye to the old system.

“The problem is, very often, mariners get stuck somewhere in between. Sometimes the solution is not right; sometimes, the implementation fails,” says Busshoff.

Taking a note from IntelliTug project, seeking active inputs from the end-users — here, the PSA Marine tug masters — can be a gamechanger. With their direct and active participation, the tug masters not only contributed with their tacit expertise and feedback but were also able to witness first-hand how the smart systems onboard the IntelliTug can augment their roles and capabilities. This allowed them to adapt and embrace changes overall.

In ASC MV Courage’s case, the crew were given a switch to bifurcate the new system to support acclimation and training. “We first brought multiple high-performing captains to Wärtsilä's facilities to just learn what the technology is, what it means to them, and what it can do for them. So, rather than starting with the mechanics of doing it, we started with the underpinnings," says David Foster, Chief Executive Officer, Rand-ASC Inc.

“As they became familiar, we started training and installation of the new systems. Even then, we ensured that the officers could always return to the old system, as a comfort. This was very important to the navigators. They knew they could use this advanced technology when they're ready, and when the risk is right and measured. Slowly, they started getting their feet wet, and finally got to a point where it's fully mature. So, it was also a mental journey, if you will.”

Also,  cloud simulation training, which comes with the convenience of anytime, anywhere training can smoothen the familiarisation process.

“Cloud simulation represents an additional, complementary tool that fits well into our overall training strategy for our crew pool of more than 29,000 seafarers. Future officers will be working on more sophisticated navigation equipment, and regular training on simulators will become the norm, similar to the airline industry,” noted Capt. Pradeep Chawla, Managing Director of QHSE and Training, Anglo-Eastern in press release last year.

Shipping is an ancient industry, and history is proof that technology has always given winds to its sails. Digital solutions aren’t any different. However, like all transitions, they too require some getting-used-to.

But there is also a good possibility that a new system works better than what you have on board. As a seafarer, you must therefore remain curious.