As the world mourns professor Maryam Mirzakhani, we are left to wonder why she, as a woman, was still an exception in mathematics, and why she's yet the only woman to have won a Fields Medal – a mathematician’s ‘Nobel Prize’.

As the world mourns professor Maryam Mirzakhani, we are left to wonder why she, as a woman, was still an exception in mathematics, and why she's yet the only woman to have won a Fields Medal – a mathematician’s ‘Nobel Prize’.

When Maryam Mirzakhani died of breast cancer earlier this year, Stanford University praised a mathematician who had inspired so many.

“Maryam is gone far too soon, but her impact will live on for the thousands of women she inspired to pursue math and science,” said Stanford President Marc Tessier-Lavigne. “Maryam was a brilliant mathematical theorist, and also a humble person who accepted honours only with the hope that it might encourage others to follow her path."

In her country of birth, Iran, and indeed across the world, the Stanford professor's death, at age 40, caused headlines. Even the Iranian president added his voice to the praise: “The unprecedented brilliance of this creative scientist and modest human being," the president said, "was a turning point in showing the great will of Iranian women."

When Mirzakhani won the Fields Medal a few years ago - the most prestigious honour in mathematics awarded every four years to up to four mathematicians under the age of 40 - professor Gerd Brandell in Sweden noted that Mirzakhani was unfortunately still an exception.

"Mathematics might be one of the most male dominated subjects. It is so strongly associated to masculinity. One has to be logical, rational, and think clearly," Brandell told The Curie Magazine. "That's in contrast to femininity which is associated with sensitivity and irrational behaviour - the very opposite of what math stands for." 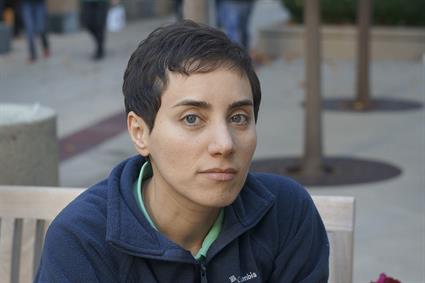 Brandell cited studies that girls can outperform boys in math and still feel they're worse at it. And by upper secondary level in school, more boys than girls take advanced mathematics courses.

Yet, women mathematicians do dot the history books. A recent list from the Smithsonian Magazine starts with Hypatia of Alexandria who in the fourth century translated classical mathematical works.

1400 years later, Sophie Germain wasn't allowed to apply to the École Polytechnique because she was a woman, but began corresponding with contemporary male mathematicians, and worked on the theory of elasticity.

Yet again, these women are exceptions. Which is odd, when it's simple math. After all, half the world's inhabitants are women, why can’t half of the world's mathematicians be women?

A lack of role models in the natural sciences is often cited as one reason girls don't enter the fields. But what about the failure to communicate the excitement of mathematics? To sell it as an adventure? Mirzakhani appears to have seen it as such, and once famously said of finding new proofs that it was “like being lost in a jungle and trying to use all the knowledge you can gather to come up with some new tricks, and with luck you might find a way out.” She did. And there’s no reason why other women can’t.

4 tips by math teachers on how to get girls into math:

1. Don’t subscribe to the idea of only some students having a ‘math brain’. It hurts the prospect of encouraging girl students into math.

2. If you can't sell mathematics in general to a student, find an area of math they like and engage them in it.

3. Highlight examples of women in mathematics to inspire female students.

4. Gender segregated classes negatively impact both girls and boys. Keep them together