Company
Home
Insights
Saving water in the age of drought

Saving water in the age of drought

Water scarcity is a looming problem, in many parts of the world, compounded by drought. To combat it, while researchers are working on cloud seeding projects and drought predicting weather models, Wärtsilä too is doing its bit by introducing solutions - like the Flexicycle power plants - that consume less water. Find out how it all adds up.

Water scarcity is a looming problem, in many parts of the world, compounded by drought. To combat it, while researchers are working on cloud seeding projects and drought predicting weather models, Wärtsilä too is doing its bit by introducing solutions - like the Flexicycle power plants - that consume less water. Find out how it all adds up.

In less than a decade - by 2025 - nearly 75% of the world’s populace is expected to live with limited water resources, a United Nations study has noted. Communities, especially those in the developing world and other regions that are already suffering from acute water scarcity are likely to bear the brunt of crushing droughts.

In anticipation, several government agencies and private companies have been working towards developing tools to mitigate some of the affects that water scarcity can cause. And for several decades now, scientists and researchers across the world have been working on ways to induce artificial rain. The technique involves seeding rain clouds with particles to precipitate rainfall which can really benefit countries with dry weather conditions.

“The UAE, which is a very dry desert country, gets its drinking and irrigation water mainly from desalination of ocean water. The aim there is to increase rain fall,” says Hannele Korhonen, a researcher at the Finnish Meteorological Institute.

Korhonen and her colleagues at the Finnish Meteorological Institute have been working on a cloud seeding project in the United Arab Emirates to identify the most efficient aerosols that can generate rainfall. Korhonen notes that nearly 50 countries have pursued some form of weather modification.

However, this technique is not always used to generate more rainfall. “There are various goals for such weather modification attempts which includes hail prevention, enhancing rain fall, or avoiding rain fall (which happened in the case of Beijing Olympics),” Korhonen explains.

Korhonen’s project is an attempt to gather more scientific evidence in the area of aerosol-cloud-precipitation interactions. “This is currently quite poorly understood due to its complexity, and the high variability of atmospheric conditions. These uncertainties make it difficult to predict whether rain enhancement via cloud seeding works efficiently, and if so, in which conditions. Scientific evidence on this matter is divided,” she adds.

According to Korhonen, a lot of other areas within cloud seeding that results in artificial rain also need to be understood. “These include the type of clouds that are susceptible to seeding, where and when to seed, how to efficiently deliver the seeding material and what the material should be, wanted and unwanted consequences of seeding, and the ethics of weather modification.”

In another part of the world, scientists have developed a mechanism which can predict the rainfall pattern in extremely dry regions of Africa over a long period of time. Reports suggest this model is likely to bring relief to regions like Sahel in Africa where there is acute water scarcity.

The past few years have brought about extreme weather conditions from hurricanes in one end of the world and drought like situations at another part of the world, often at the same time. Scientists expect that such advance warning mechanisms can help governments put in motion mitigation plans, well in advance.

“Improved understanding and predictions of summer rainfall in the Sahel region has the potential to help decision makers better anticipate future cycles of summer droughts and floods. This will help local communities become increasingly resilient to the region’s notoriously variable and changing climate,” according to Dr. Katy Sheen, a professor at the University of Exeter and a former Meteorological official cited in the UK publication - iNews. 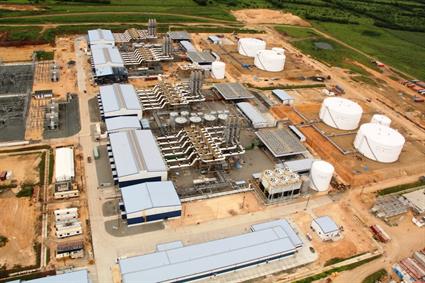 Wärtsilä's largest Flexicycle installation is the Quisqueya I and II power plant complex in the Dominican Republic.

Companies have also been alive to this issue. They have found ways to do business in regions that are drought prone by developing techniques to conserve water. Wärtsilä, for instance, has been working on creating power generating systems that consume various amounts of water. The Flexicycle™ power plants solution is based on gas, multi-fuel or liquid fuel internal combustion engines (ICEs) and a steam turbine combined cycle.

According to Ville Kallioniemi, the product manager at Wärtsilä Energy Solutions and also an expert in this technology, there are four common cooling methods for the Flexicycle™ product: raw water cooling (e.g. once through sea water or river water), cooling tower, air cooled condenser (ACC) and radiators. Out of these, radiators and ACC do not consume water in the cooling process.

Latif has worked with several customers that use the dry Flexicycle product, especially in arid regions. He says the users benefit as the system’s water consumption is economical.

“We know that this reduces the consumption of water by over 90% as it’s a closed system whereas earlier options where cooling with the help of cooling towers required huge quantity of water,” he explains further.

Kallioniemi stresses the importance of educating customers about the benefits of this technology.  This is in part because water consumption is critical for many areas where Wärtsilä does business. In the latest improvement in the dry Flexicycle technology, the company uses a heat exchanger for blow down cooling, instead of a batch of cold water. The next logical step would be to reduce the amount of boiler blowdown, notes Kallioniemi.

So far, water has been a key ingredient in producing energy. But there is hope that such techniques are likely to gain wider acceptance as water becomes a critical resource over the next decade.