Powering the next generation

It’s a brisk sunny day near Tampere, Finland. The temperature is below freezing point, and when the bell rings to mark the end of recess, the corridors of a school fill with red cheeks, winter boots and warm overalls hanging from the coat racks.

Children, from pre-schoolers to sixth graders gather in a classroom. Their eyes steal a glance at a scale model of a Wärtsilä engine, made out of Legos, on the teacher’s desk.

“Good morning!” says Matti Rautkivi, Director of Sales and Marketing, Wärtsilä Energy Solutions. “We’re here to talk to you about the future of energy.” He goes on to explain what Wärtsilä does and how the engines, like the one on teacher’s desk, helps provide energy when the sun doesn’t shine or the wind doesn’t blow.

The topic isn’t entirely new to the 70-odd children as they have been exploring power generation and renewable energy, all week, as part of the ‘energy week’ at school.

“We have been exploring different energy sources and trying to understand where our energy comes from,” explains teacher Niina Ketomäki. The method called phenomenon-based learning is an essential part of the Finnish education system. The key in this way of learning is to engage the children and make them ask questions.

This explains why some of them are fast on their feet to answer Rautkivi’s question.

“Who can guess how big is the real engine?” he asks.

“At least 500 million times bigger!” suggests one. “Or, at least a lot bigger than this.”

Rautkivi, accompanied by few of his colleagues, tells the children how the engine can be used in a power plant or a vessel to provide energy. He explains the power and the size of the engine by comparing it to things children know: car engines, horses and trains.

It’s now time to switch from theory to practice. 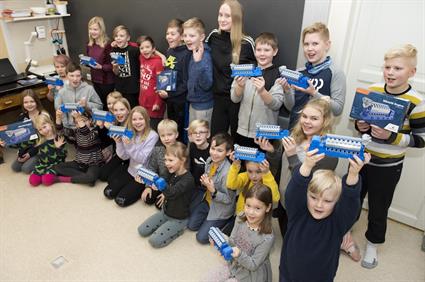 The students are asked to build an engine, using Legos.

The kids rush out of their seats, grab a kit, and start pouring the hundreds of little grey and blue pieces out of the box. They work in groups with kids of different ages in each of the group. Ketomäki explains that one of the school’s goals is to help children learn how to co-operate and learn together.

The students shoot questions at Wärtsilians while building the engine.

“What does this part do?”

“How many pistons does this engine have?”

“The best part of the schooling system in Finland is that you have the freedom to ask and apply what you learn,” says Finland-born-and-educated Rautkivi, who now works in Houston, Texas.

One of the people wandering between tables and helping kids assemble their engines is a former student, Olli Mäkinen, who is visiting the school. The kids couldn’t have asked for a better helper: both a mechanical engineering student in the Tampere University of Technology and an award-winning Lego builder.

“I mainly build cars and different kinds of vehicles from Legos,” he says humbly. But there is no reason to be humble, says Tuomo Pekkanen, Mäkinen’s teacher in upper middle school.

Pekkanen notes that Mäkinen’s passion for engineering was visible from an early age.

“Once he built a functioning slot machine, where you could insert actual coins, just out of Legos”, he recalls. “Just imagine the amount of mathematics, engineering and problem solving that goes into that!” 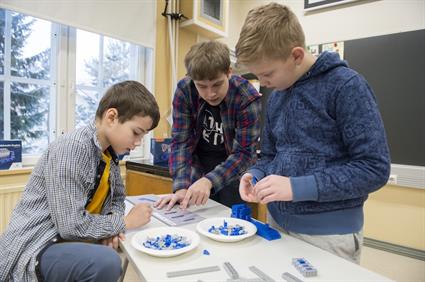 In a little more than half an hour, a fifth-grade student and his group are already almost done with their engine. The kids admit they know their way around Legos.

“I don’t know if I would be interested in building these when I grow up, though,” the fifth-grader admits. “At the moment, my interests are elsewhere: in chemistry and natural sciences.”

Luckily for him, the Finnish education system is extremely supportive of children’s interests.

For Niina Ketomäki, who has been teaching at the school for the past fifteen years, the key is respecting the children’s abilities to learn and understand things.

“It’s important that whatever the children learn isn’t just handed out from the teacher. We need to encourage the kids to explore and figure things out themselves.”

Pekkanen, who teaches physics and data science in an upper middle school, agrees.

“Some children like to do stuff with their hands, others want to be social while they learn. If the method is right, there is nothing we cannot teach them,” he observes. “It’s great to see the kids finding their own interest.” 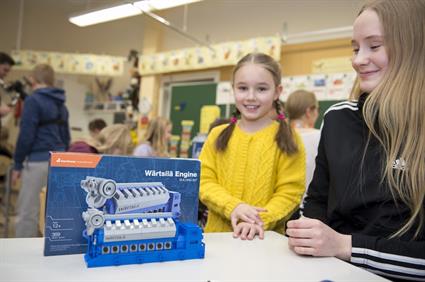 Traditionally, Finland has been strong in the engineering sciences – after all, it’s the country where technology giants like Wärtsilä, KONE and Nokia were born.

Even now, students from grades four to six in this county can choose to include ‘technology education’ in their studies. On this optional track, the future decision-makers get to practice their skills in technology and science from an early age. This influence in curriculum stems from the fact that the county is close to one of the biggest cities in Finland, Tampere, which is home to several big technology companies.

As more and more groups ready their engines and parade them across the classroom, the visitors from Wärtsilä talk excitedly about the event. They compliment the kids on their collaborative spirit.

Soon, it’s time for recess – outside, naturally. The kids dress up in their winter overalls and rush out to enjoy the sunny day.

The Wärtsilians follow the kids to the school yard. One of the colleagues from Texas decides to join the fifth and sixth graders in the ice rink for a game of ice hockey. A pair of skates, a helmet and a hockey stick are produced, and soon he glides in to the rink, a little wobbly but learning quickly. After all, the Finnish schooling system is all about figuring things out for yourself. Isn’t it? 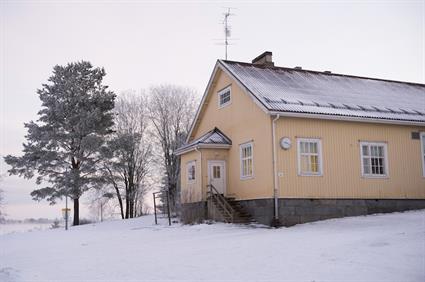