The authors of this paper studied the added value a Wärtsilä hybrid power plant (with internal combustion engines and energy storage) can provide its owners and operators in terms of economical savings and enhanced performance. The case study and simulations were made based on actual load data from an islanded industrial operation.

The hybrid power plant in question comprises six Wärtsilä 20V34DF dual-fuel (DF) engines, capable of running on natural gas, light fuel oil and heavy fuel oil, providing the plant extremely valuable fuel flexibility. The Wärtsilä 20V34DF engine delivers nearly 10 MW each with a total plant output of 58 MW. With the energy storage available in the system, the total hybrid plant capacity is 68 MW; and if solar photovoltaic (PV) generation with a performance ratio of 11 MW would be added to the system, the maximum generation capacity would be 79 MW.

As the case study is in an isolated grid, there are requirements on the generating assets to have spinning reserve capacity. For the generation units, it was selected to have contingency reserve equal to the generating unit operating at highest load and in addition also 80% of the actual solar PV generation.

The demand data of the industrial site including solar PV generation was simulated with the plant dispatch modelling tool PLEXOS®, a tool commonly used by utilities, consultants, system operators and regulators globally. 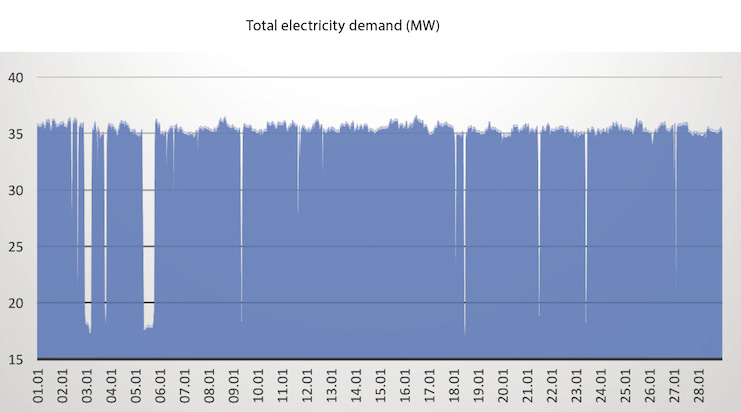 The demand profile has a 30-minute resolution and the load profile for this time period is presented in Figure 1. As the grid is an isolated grid, i.e., microgrid, the demand profile equals the load that the generating units have to produce. In Figure 2, the same demand data is presented, but here also solar PV generation with a performance ratio of 30% of total demand has been included.

When evaluating the demand profile, the power need is relatively stable with a load slightly above 35 MW. It can also be noted from the profile that there are eight major events where the load is dropping rapidly with nearly 20 MW.

The trips in the system are causing additional stress on the generating units. However, it is also important to note that demand data with second resolution would be required to be able to study the real impact on, for example, frequency of these load drops.

The Wärtsilä DF engines can ramp to full load in 60 seconds and are capable of taking single load steps of 30%, giving it sufficient fast and flexible generating capacity to respond to these load changes. 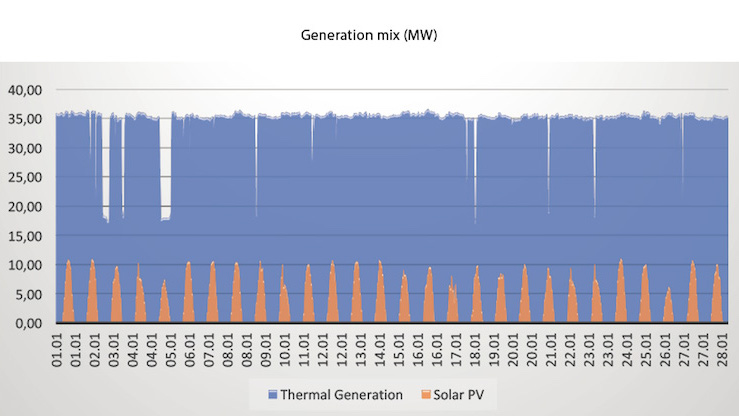 What already can be seen today is that there are solid financial grounds for investing in hybrid power plants with integrated internal combustion engines + energy storage. For the energy storage, the internal rate of return (IRR) in the most feasible case was 112% and net present value (NPV) 10 MUSD. In all analysed cases, positive NPV’s and IRR’s over 30% were reached, hence there are no doubts about favourable investment decisions. Especially in remote locations, the potential enhancement that can be reached by integrating energy storage to the power plant are directly linked to the fuel prices and thus have potential to save millions on annual basis. For instance, in remote mines, factories and islands, where fuel prices are generally high, there is great potential of fully integrated and optimised hybrid power plants combining internal combustion engines, solar PV and energy storage. 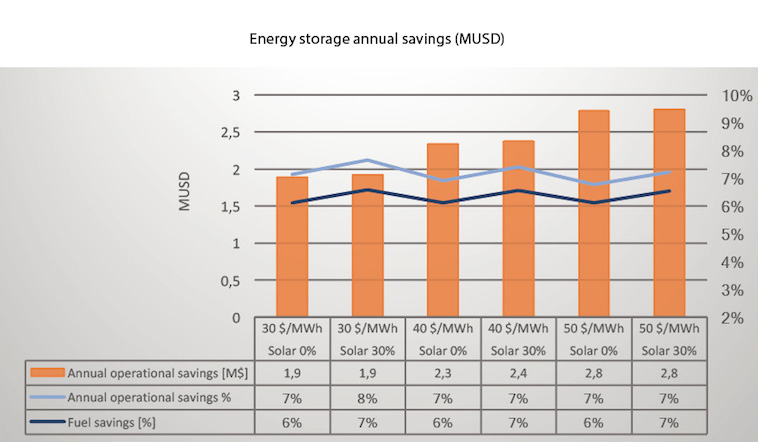 It should also be noted that existing power plants can be enhanced by integrating energy storage, and solar PV systems, which will improve its performance. (Figure 4)

The demand for ‘greener’ electricity production keeps rising, and this is normally achieved by adding renewable generation to the system. However, as renewable generation depends on actual wind speed or solar irradiation, flexible generation assets are a must to be able to balance the network. Hence, by optimising the thermal power plant with energy storage, the complete system can be operated at higher efficiency, and by this also the total amount of emissions can be reduced as less fuel is consumed with same amount of energy, thus providing optimised system with ‘greener electricity’.

In the study, fuel savings of 7% and annual savings of 8% were reached by adding only energy storage. For the multi-hybrid power plant, the operational savings were as high as 13%. Hence, there is a clear case also to integrate renewable generation to thermal generating systems. Also, all the generating assets shall be sized and optimised taking into account how the complete system works with the actual or forecasted load profile. By integrating all generating assets with an energy management system, the full potential of the complete system can be unleashed. 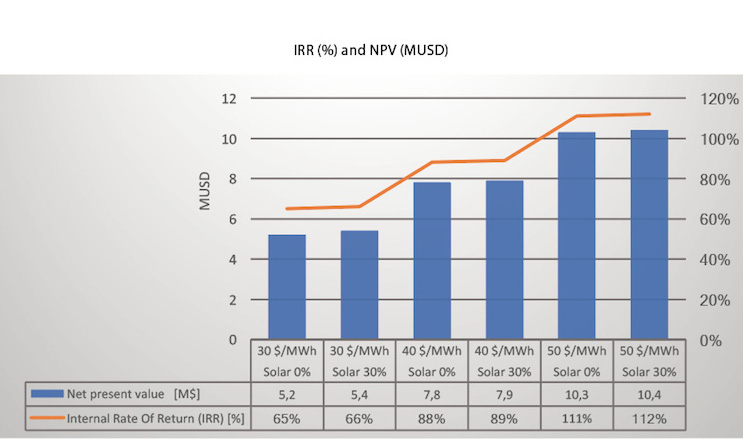