The isolated power grid of Baja California Sur is facing severe challenges. Currently, the price of electricity is by far the highest in Mexico. The population also demands cleaner power with less emissions and more integration of renewable energy. Significant amounts of intermittent wind and solar power will come online, but several old thermal power plants must be mothballed. Due to the booming tourist industry, the electricity demand will almost double by 2030. (Figure 1)

According to SENER, the Secretary of Energy of Mexico, as much as 584 MW – roughly half of the planned total capacity of 1250 MW – of new thermal generation capacity will be needed in the Baja California Sur grid. Decision-makers must determine which technology for this new thermal capacity will create a power system that functions optimally, in terms of affordability, reliability and sustainability.

Based on data from SENER and Energy Exemplar, Wärtsilä conducted a modelling study where state-of-the-art gas turbine power plants and internal combustion engine (ICE) power plants were compared as alternatives for the new-build capacity. The focus of the in-depth PLEXOS analysis is on system-level cost savings (OPEX+CAPEX), which will have a direct impact on the electricity price in Baja California Sur. 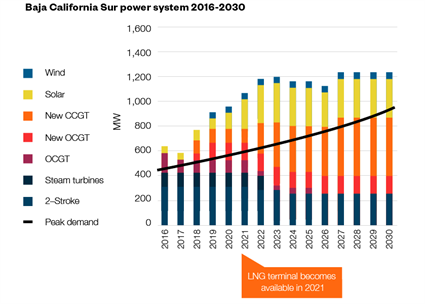 Fig. 1 - In the next 15 years in Baja California Sur, the generation capacity, as well as the peak demand, will roughly double. The focus of analysis is on a 584 MW new-build thermal fleet (“New CCGT” and “New OCGT”). Source: SENER and Energy Exemplar.

Fig. 2 - The share of renewables will grow by many times in Baja California Sur by 2030.

BASE CASE – THE VALUE OF FLEXIBLE GENERATION

This base scenario includes all the planned capacity in Baja California Sur from 2016-2030 and compares gas turbine assets against ICE power plants in fulfilling the thermal new-build target of 584 MW by 2030. According to SENER guidelines, this target is further split into combined cycle (CCGT) and open cycle (OCGT) technology, 480 MW and 94 MW respectively1.

Liquefied natural gas (LNG) is forecast to be available in 2021, which is optimistic for completing the new LNG import terminal in Baja California Sur. According to default goals published by SENER, the combined share of wind and solar energy by 2030 will be 16%. (Figure 2)

Figure 3 shows the results of the Base Case. Compared to the frame gas turbine option, the ICE assets produce cumulative savings of USD 372.7 million by 2030. In other words, choosing ICE technology for the new thermal fleet would lower the total operating costs of the grid by 9.1%.

Compared to the aeroderivative gas turbine option, the ICE alternative saves USD 232.4 million by 2030, or 5.7%. The savings derive from three factors:

Fuel flexibility. Wärtsilä ICE plants can use any liquid or gaseous fuels. In this scenario, they run on inexpensive heavy fuel oil (HFO) until 2021 and then switch to LNG-based natural gas. The gas turbines, by contrast, have to rely on the relatively expensive light fuel oil (LFO) until LNG becomes available.

Flexible operation. Due to the high penetration of renewable energy, especially solar power, the baseload plants in the system must be extremely flexible and follow the variable output of the renewables. Thanks to the ultra-fast starts and stops, quick ramping capability, and high part load operation efficiency, Wärtsilä ICE plants outperform gas turbines in this task. This capability also reduces the consumption of fossil fuels overall. 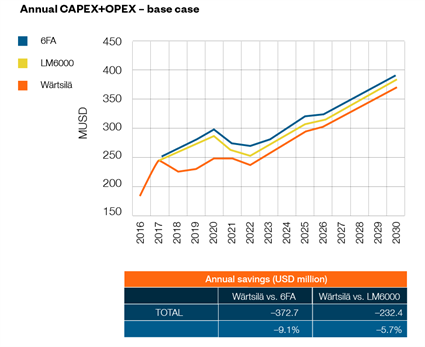 Fig. 3 - In the Base Case, ICE technology, if chosen for the new 584 MW thermal fleet, would produce significant savings in total electricity generation costs in the power system compared to the gas turbine options. The savings come from fuel flexibility, operational flexibility and the reduced need for spinning reserves. The Base Case assumes LNG availability in 2021. 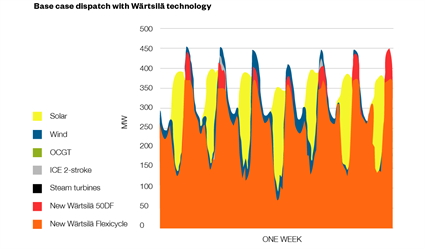 Fig. 4 - This one-week dispatch graph for the year 2025 shows how dramatic the effect of renewables is to the dispatch pattern. Solar PV will peak at noon daily, and thermal power plants must ramp down. In the afternoon, thermal power needs to ramp up hundreds of megawatts in a very short time. The system savings of the ICE option derive largely from the capability of such ultra-flexible operation.

The timing of construction of the new LNG terminal in Baja California Sur is crucial to the costs of generating electricity. In the model, natural gas will replace HFO in the Wärtsilä assets and LFO in gas turbines whenever it becomes available. The optimistic estimate is 2021, but the real risk of delay was modelled to show the consequences.

Compared to the Base Case, a five-year delay in LNG availability from 2021 to 2026 causes a dramatic rise in gas turbine systems costs (Figure 5). However, it causes an equally drastic increase in the relative savings achieved by the ICE option, which would continue to use inexpensive HFO until 2026 while gas turbines rely on costly LFO.

High shares of renewable energy are needed to reduce significantly the carbon dioxide emissions from electricity production. In addition, the price of wind and solar energy is competitive. However, due to their natural variability, wind and solar power cause stress in the power system – especially in an isolated one. Sudden changes in their output have to be compensated by thermal power plants that are flexible enough to absorb the changes6. In the High Renewables scenario, all thermal assets are forced to cycle daily.

Compared to the Base Case, the High Renewables scenario shows more savings for the ICE option: USD 408.8. million (10.3%) against the frame gas turbine, and USD 255.6 million (6.5%) compared to the aeroderivative gas turbine alternative. (Figure 6)

Due to their ultra-flexible operation capabilities, Wärtsilä ICE plants efficiently integrate variable renewables7. Continuously throughout the day and without penalty in maintenance costs, the ICE plants can start up to full power in less than two minutes and shut down in less than one. Their efficiency in part-load is very high, which is essential in backing up renewables. These are factors behind the savings.

It is worth noting that, on the system level, the High Renewables ICE case is 3.1% cheaper than the ICE Base Case. The same does not apply to the gas turbine options. This means that introducing ambitious shares of wind and solar energy quickly will result in a power grid that is both sustainable and affordable, if the thermal assets are flexible enough to support the integration of the renewables. 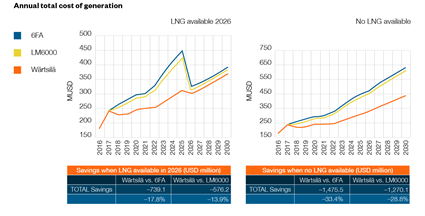 Fig. 5 - Natural gas will be the cheapest and cleanest fossil fuel in Baja California Sur. Thus, as this figure demonstrates, delays in completion of the new LNG terminal impact the electricity production costs of the system. 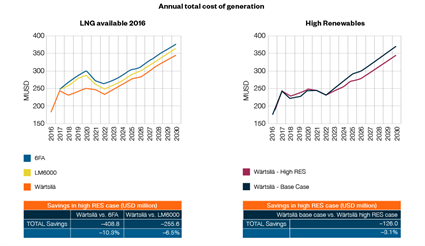 Fig. 6 - If the amount of wind and solar in Baja California Sur increases according to the latest national targets by SENER, extreme flexibility is needed from the thermal fleet. ICE technology is superior in such agile operation, producing significant system-level savings compared to the gas turbine options.

THE CASE FOR AN INTERCONNECTED SYSTEM

Yet another possible development in the Baja California Sur power system is connecting it to the national electricity grid with a DC-link of 650–850 MW capacity. This plan, initiated by the Mexican government, includes 1800 km of bipolar DC cables to the mainland, five substations and two capacitator banks. The connecting cables would put an end to the isolation of the power grid of Baja California Sur and provide a substantial continuous capacity of affordable imported electricity8.

The DC-link plan was included in the PLEXOS modelling as an alternative scenario. Obviously, one conclusion is that less than 584 MW new thermal capacity will be needed if the connection is built. This is because the 650–850 MW connection would cover most of the electricity demand in 2030. However, it is unclear whether the full capacity of the connection could be used continuously. There may be technical challenges, such as reduced inertia in the Baja California Sur System. Another conclusion is that the DC-link would lower total system-level costs significantly, due to a new source of low-cost electricity, and a delay in building the connection would increase them.

Most importantly, the results show that the ultra-flexibility of ICE power plants provides notable savings in all the three modelled DC-link scenarios. If the connection is available in 2022, ICE plants provide 6–7% percent savings, compared to the two gas turbine options, and if delayed to 2026 or beyond, the savings provided by the ICE case increase to 16–33% by 2030.

The results show a similar hedging mechanism as in the Sensitivity Case A: Delay in LNG Terminal. The ICE option is not only the most affordable scenario from the system cost point of view but also as a tool for risk management. Building the connection to the mainland is a complex project so delays are possible. By choosing the ICE option for the local new-build thermal generation fleet, additional costs of such delays are minimised.

The Baja California Sur power system is a good example of a contemporary grid with challenges in increasing electricity demand, ensuring fuel availability and addressing ambitious goals to include intermittent renewables. The fact that the grid is isolated only reinforces these challenges. This PLEXOS modelling shows that new thermal assets in Baja California Sur should be planned from the system-level perspective. Only this kind of helicopter view provides the full picture of how the grid can be developed into a more reliable, affordable and sustainable power system.

In addition, two uncertainty scenarios were modelled, demonstrating a delay in LNG availability, and a very high renewables penetration. The ICE option provides up to USD 1475,5 million (33.4) savings by 2030, compared to the gas turbine options.

The ICE option is superior in all uncertainty scenarios and is cleaner, more reliable and more economical. This means that flexible generation future-proofs the power system against future changes. The operational and fuel flexibility makes the power system more resilient and helps to manage risks better. Therefore, it is a safe investment even when there are major uncertainties. In fact, installing new thermal capacity in Baja California Sur is an opportunity to optimise the power grid.

The challenges are similar to the rest of Mexico: rising demand, high penetration of renewables, ageing thermal plants and varying availability of cleaner natural gas. These results may predict the right path for the national grid as well, but more research is needed.

Fig. 7 - Wärtsilä ICE technology enables significant, system-level savings in the Base Case and in all uncertainty scenarios. The flexibility of the ICE plants provides resilience, a guarantee against unpredictable future changes, such as a delay in LNG availability.

ICE plants are modular, consisting of several gensets that can be operated independently. The largest engine power plant in the world, the 623 MW IPP3 in Jordan, comprises 38 Wärtsilä 50DF engines.

An average price of 8 USD/MMBtu is used for LNG. This includes the base mainland price of USD 5 for natural gas, and an additional USD 3 premium for transporting the gas to Baja California Sur in the form of LNG.

Renewables grow aggressively in the first modelling years but remain steady after 2023.

In the US, Wärtsilä has supplied several 200 MW dedicated wind-balancing ICE plants. The engines in these plants typically start and stop several times per day.

It is assumed here that the price for imported electricity would be 40 USD/MWh on average.