Wärtsilä’s customer event, held early this October, at its Central Distribution Centre in Kampen, the Netherlands addressed a key question - ‘How can we support you in successfully serving your customers today and in the future?’ The event introduced customers to the latest technologies (robots included) used in optimising logistics flow.

Wärtsilä’s customer event, held early this October, at its Central Distribution Centre in Kampen, the Netherlands addressed a key question - ‘How can we support you in successfully serving your customers today and in the future?’ The event introduced customers to the latest technologies (robots included) used in optimising logistics flow. Read on to see how the day played out.

An orange robot crane zoomed towards the group of Wärtsilä’s customers. They were standing in the 20-metre high, fully automated so-called High Bay area in the Central Distribution Centre. It picked a wooden pallet off the orange racks and returned at a speed of 11 kilometres an hour.

“That’s impressive,” commented one of the visitors, wearing an orange safety vest and safety shoes. He had joined others from companies around the globe for the technology group’s customer event, named ‘Powering the supply chain – Logistics without boundaries’.

As they walked through the highly automated warehouse, they were passed by a yellow-vested forklift-driver on one side and grey plastic boxes moving along a conveyor belt on the other. During this Gemba walk - a Japanese term meaning ‘the real place, the real thing, the real people’ - the visitors, divided in small groups, learned more about transportation, warehousing, parts supply, and quality assurance. 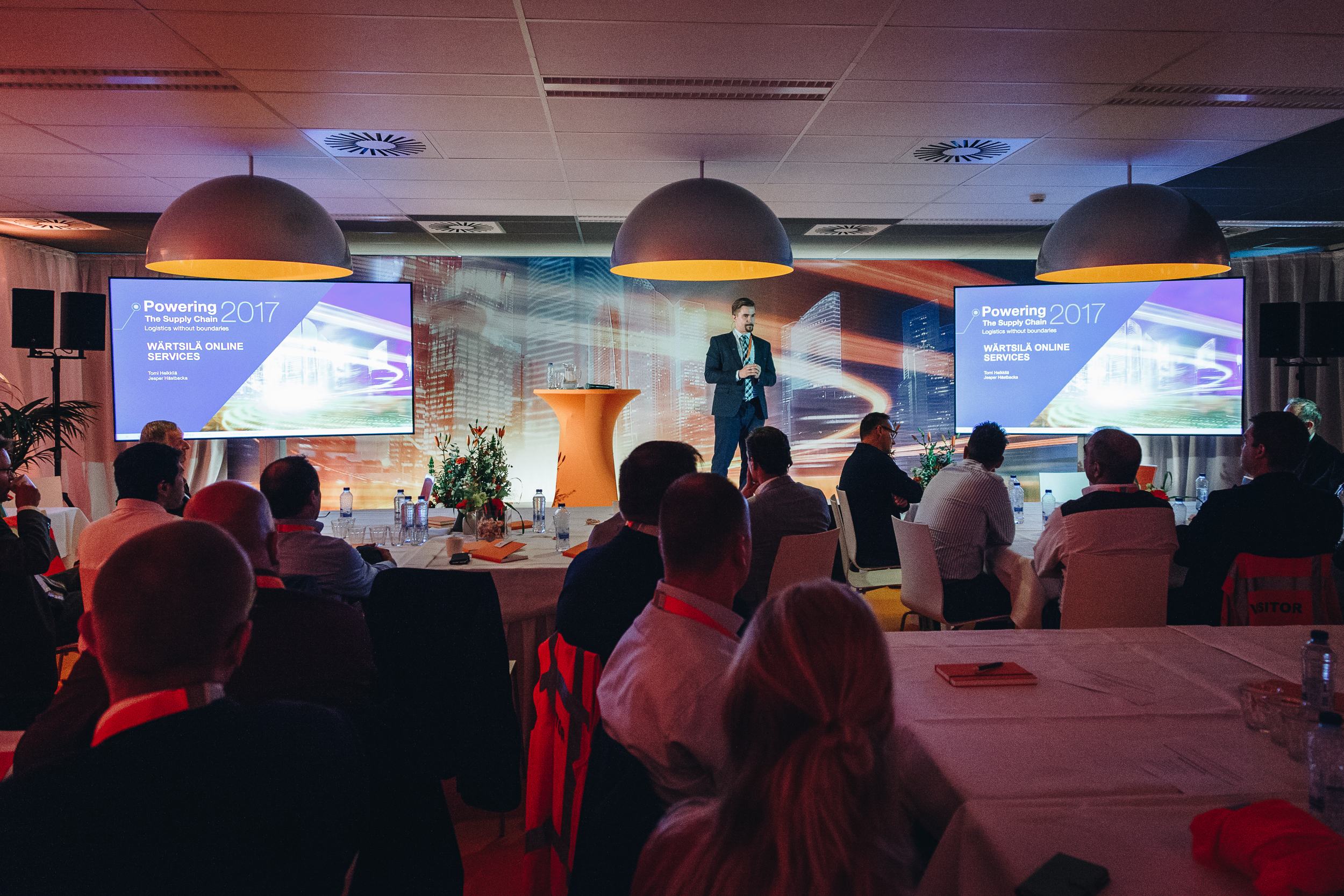 “It starts with communicating and understanding each other,” said Rob Scharff, Global Purchasing & Logistics manager from Stolt Tankers B.V. in Rotterdam, who attended the event with a few colleagues. “It’s only logical that we look together at how to improve processes.” He added that while digitalisation can make things faster, it’s important that people develop alongside it.

According to him, in the coming years, it will become increasingly important to know in advance which products are needed when and where, so the right goods are available immediately, while still keeping supplies limited. “It would be brilliant if Wärtsilä could predict how long their engines can run and when to buy new parts.”

Wärtsilä’s director of Global Logistics Services, Christian Rönnholm, mentioned that the company implements condition-based maintenance, providing maintenance to engines and other machines at certain intervals. “This shows in advance when something needs to be replaced, which increases reliability.” Wärtsilä also recently invested significantly in its global spare parts availability and regional presence. “When the goods are located closer to the customer with optimised inventories and flexible delivery points, we can deliver them faster.” In the coming years, regional centres will be established in new locations. 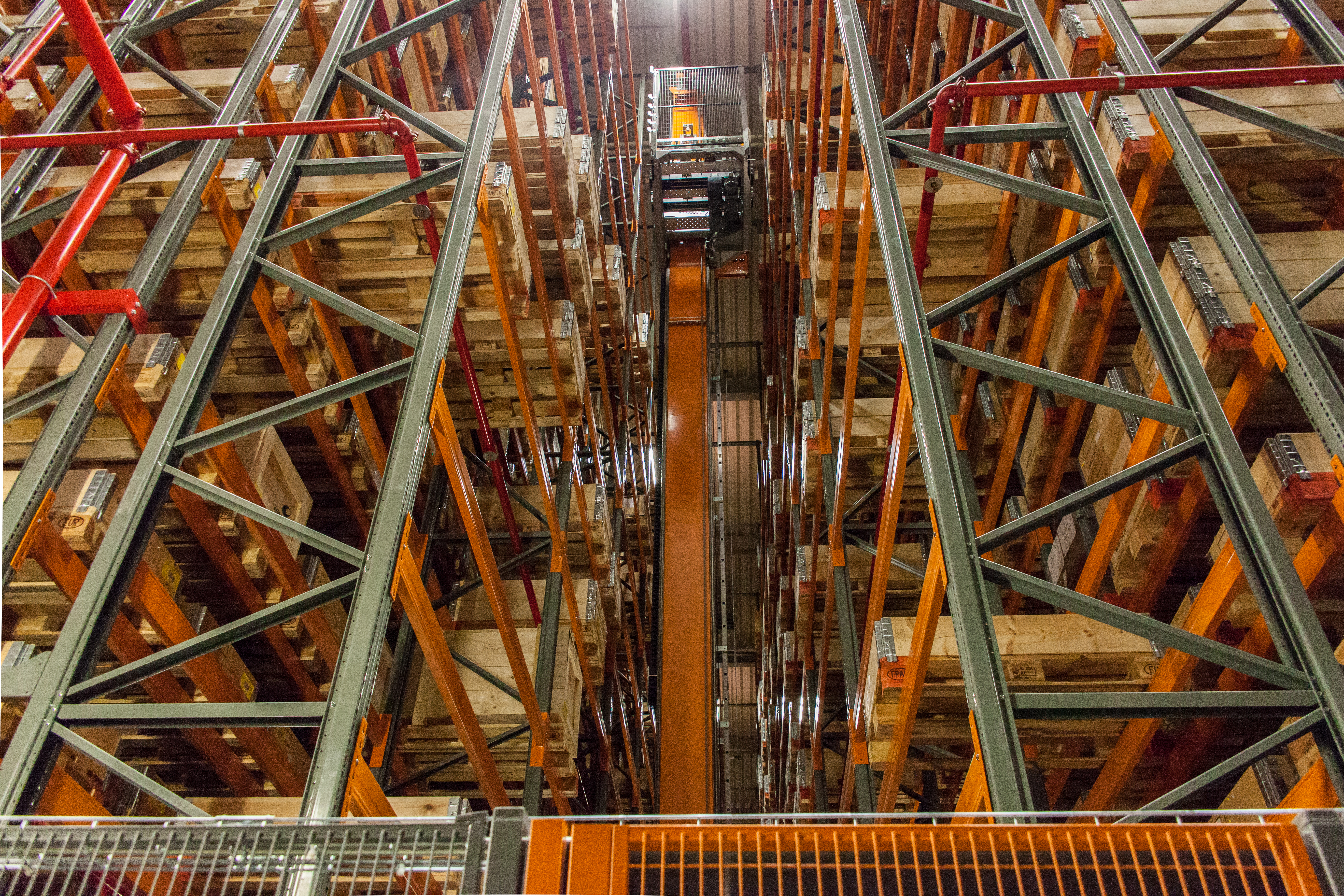 An orange robot crane comes near in the 20-metre high, fully automated High Bay area in the Central Distribution Centre in Kampen, the Netherlands

The Central Distribution Centre, which opened in 2010, has a floor space of 37,000 m2. It covers the entire material flow from order intake to delivery. Altogether, there are 120 Wärtsilä and 210 partner-company employees who work here. Around 27 million pieces are in stock with over 83,500 unique parts. Last year, over 100,000 deliveries were shipped from here to more than 180 different countries.

The visitors entered a climate-controlled area (always 20° C), where high-tech equipment, such as a large coordinate measuring machine, is used to check part quality and numbers. “I always say, quality is not a department, but an attitude,” one of the employees in a light green vest smiled.

He was showing the visitors a small yellow device and telling them about a pilot they were running with five of these ‘smart sensors’, which can measure temperature, humidity and light. “We send them along with shipments to customers who are experiencing difficulties.” For instance, a customer in India wasn’t satisfied with the quality of the parts they received. The sensors soon made clear that the road from the airport to the customer was very bumpy. Double packaging is now being used to resolve the problem. 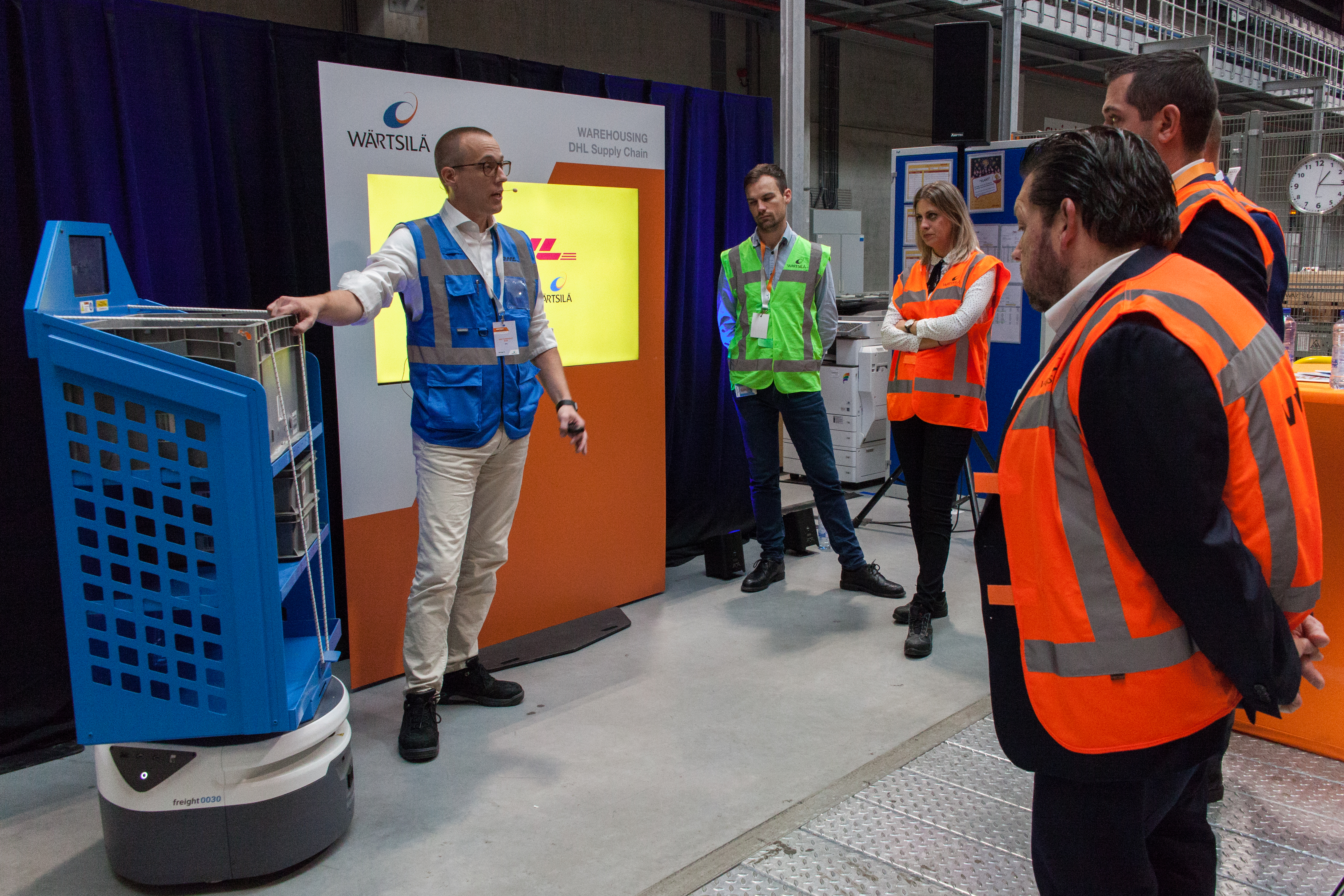 Bob van Turnhout, site manager at logistics company DHL,one of Wärtsilä’s partners, showed the small blue robots that have recently been taken into use

Further along, the visitors were passed by a small blue robot carrying grey boxes. “We’ve recently started using these,” said ;Bob van Turnhout, site manager at logistics company DHL, one of Wärtsilä’s partners, that operates a significant part of the warehouse activities. “The robots move the goods from A to B, freeing up time for us to do more rewarding tasks such as quality checking.”

“A day like this is a great opportunity to hear what our customers need,” Van Turnhout said, also mentioning his appreciation that Wärtsilä had involved its partners. “Now we can show them the complete chain.”

The group reached the other side of the warehouse, next to the loading bays from which around 35 trucks depart each day. Here, staff from transportation partner CEVA logistics told the visitors about the future of transport, which will involve innovations such as wind energy and platooning, with single-driver truck convoys.

In addition to the Gemba walks, the visitors could attend several presentations about Wärtsilä’s innovations during the day and join a boat trip on the river IJssel in the evening. There was plenty of time for their questions.

“An event like this is new to the global logistics business,” said Christian Rönnholm. “We like to be closer to our customers, so we can serve them better, and we’re also proud to show them what we can do.”

“It was time to open the doors of Wärtsilä Global Logistics Services to receive feedback directly from our customers,” said Joe Lunday, General Manager at Parts Coordination Management, who helped organising the day. “This event will not only help us modify and explore opportunities to improve today’s services but it will also aid in the development of future initiatives, ensuring our investments are supporting a path that our customers will value for years to come.”