Company
Home
Insights
Kustaanmiekka strait: The Gibraltar of the North

Kustaanmiekka strait: The Gibraltar of the North

The northern seas are not the easiest to navigate thanks to unruly weather conditions. It is made tougher when you have to pass through the narrow Kustaanmiekka strait, which is 81-metres wide in shallow waters, at the Finnish capital city’s harbour. Here’s how new training techniques and better technology are making the passage much safer.

The northern seas are not the easiest to navigate thanks to unruly weather conditions. It is made tougher when you have to pass through the narrow Kustaanmiekka strait, which is 81-metres wide in shallow waters, at the Finnish capital city’s harbour. Here’s how new training techniques and better technology are making the passage much safer.

Kustaanmiekka is the southernmost of the eight islands that form the Suomenlinna district of Helsinki in Finland. It is an 81-metre-wide strait between Kustaanmiekka and Vallisaari island in Helsinki’s archipelago.

As the strait is located right at the mouth of the capital city’s harbour, it attracts plenty of marine traffic. Most passenger ferries and cruise ships departing from the south harbour in Helsinki navigate via this route. Called ‘The Gibraltar of the North’, the area is also a popular spot among locals for its beauty and for recreational activities such as boating and sailing.

However, the Kustaanmiekka strait is a challenging stretch, especially for big ships. Apart from being narrow, it is also quite shallow at places. Cruise ships traversing the strait are typically about half that size in width, and it is quite a task for longer cruise ships to get through the passage. Moreover, harsh weather conditions such as heavy rains, fog and hard winds, very common in Helsinki during autumn and winter, add to the challenge.

In the past, marine accidents in the strait weren’t uncommon. However, today, both training and technological advancements are making navigating the strait, easier. 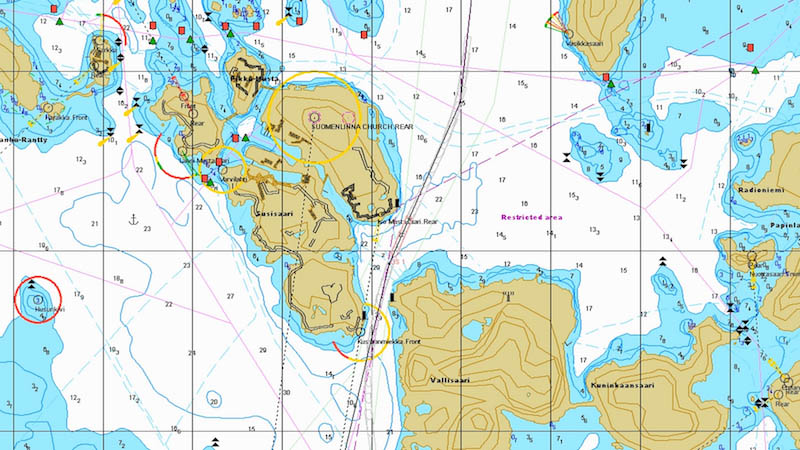 Not a straight sail

The Estonian ferry company AS Tallink Grupp operates regular cruises between Helsinki and Tallinn via the Kustaanmiekka strait.

“For our ferries, heavy winds pose the biggest challenge at straits such as Kustaanmiekka. Narrow passages limit the speed of the ship. With lower speed, the drift is higher, and the ship needs more space,” explains Juha Rautavirta, an experienced captain at Tallink Silja.

Vesa Marttinen, Director of Cruise, Ferry and Superyachts at Wärtsilä, agrees that the natural formation of the area is challenging, and recreational activities that add to marine traffic increase the risks.

“Both commercial shipping and recreational boating takes place in the area. It is therefore very important for both commercial as well as recreational sailors to be aware of these conditions. Therefore, having a shared overview is of utmost importance to lower the risk of accidents,” he explains.

In maritime terms, having a shared overview means that all the different operators in the ecosystem, the crew, pilots, vessel traffic service, and harbour officials, have a shared view of what is going on at any given moment. For instance, how many vessels are moving around the challenging area, what the weather is like, the presence of leisure boaters.

“It is also absolutely vital to have co-operation between vessel traffic service (VTS) and all marine traffic, including passenger ferries, cruise ships and leisure boats,” adds Marttinen.

VTS is crucial as, like air traffic control, they provide information on all vessels shoring or leaving the harbour.

Marttinen also stresses the importance of redundancy in systems, with backups available in case the original system fails or falls apart. Sometimes the original system itself is duplicated or triplicated, and in the case of emergency, having information about the redundancy system of the vessel is thus crucial.

Rautavirta agrees. “Well-functioning technology is very important for us, as is information about redundancy in the systems. So, if a defect occurs somewhere, we can minimise the impact it has on the manoeuvrability of the vessel,” he says.

In maritime history, accidents and disasters have often led to improvements in safety. This holds true for the operators in the Kustaanmiekka strait as well, and advancement in technology has played a big role in it.

“The design of vessels, for instance, naval architecture, has progressed and even the big vessels of today are swifter and faster and easier to manoeuvre than how it was a couple of decades ago,” says Marttinen.

“Operating safety has seen remarkable improvements with the introduction of management systems, ISM (International Safety Management) Code and cooperation practices within the maritime ecosystem. Earlier, safety was seen as something each vessel provided for itself. Today, each operator is seen as a part of a functioning ecosystem of ships, VTS, shipping lanes, harbours and pilots,” he adds.

“Technological advancements have been helpful. The big vessels of today would be very difficult to manoeuvre without all the information available about its motion provided by the modern systems. The human eye is way too unreliable especially without good reference points, for example, in the dark or in poor visibility due to bad weather conditions,” explains Rautavirta.

Another important aspect that has made navigating difficult waters easier is improved training. Advanced techniques such as real-time simulation training (see video above) have enhanced skills and competence of crew.

“The simulators have been used to train for emergency situations since the 1990s and have enabled us to train for unusual events and test the limits of a vessel’s capacity. They also allow us to train for technical issues with propulsion and rudder. This kind of training certainly increases competency and prevented accidents,” says Rautavirta.

Both Marttinen and Rautavirta see technology playing an important role in maritime safety in the future as well.

“The next big advancement will be related to the development of better human-machine interface, in which human creativity, data collection and machine analytics will be combined to improve safety,” concludes Marttinen.