Islands in the sun

Surrounded by water on all sides, island nations have long been forced to depend on having energy resources shipped to them. However, improvements in renewable energy technology and affordability have caused many of them to look at solar and wind power. Will the 21st century see islands finally becoming self-sufficient when it comes to their energy needs?

Talk about the American Samoa and chances are that long beaches, epic waves, and sumptuous seafood are what comes to mind. Set in the center of the South Pacific Ocean, this archipelago is a favourite among tourists looking to get away from it all. And until late last year, the T’au island in American Samoa was wholly dependent on shipments of diesel fuel to generate power.

But in November of 2016, a new solar-powered, micro grid was developed, allowing the island to embrace solar power for all its energy needs. A system of over 5,300 solar panels was installed on seven acres of land, generating about 1.4 megawatts (MW) of energy which has provided the 600 residents living there with all the power they need. 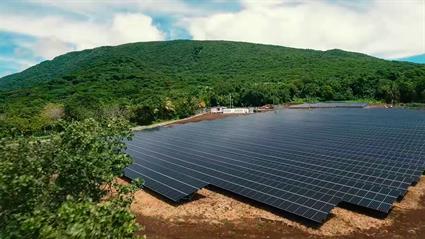 Paving the way towards clean energy

“In islands, the costs of importing fuel can rise due to special shipping arrangements and constraints. Generally, diesel is the most expensive, followed by heavy fuel oil (HFO). Liquefied natural gas (LNG) is the best alternative, but building the infrastructure for it can be time-consuming and expensive,” says Leino. “On the other hand, solar power costs are coming down every year, and wind power technology is improving and windmills have been performing better even in low wind conditions. Comparing the output and costs to conventional means, it makes sense for islands to look at renewable energy sources.”

As a result, efforts are underway in Hawaii, the Cook Islands, the Caribbean and other island communities across the world to shift focus from fossil fuels to renewable energy sources, including wind and solar energy. However, the shift towards clean energy is not without its share of challenges, the chief among them being its intermittent nature. For instance, solar power may not be at sufficient levels during cloudy days, wind power generation can stall on days when the wind is not strong enough or dies down.  Plus, points out Risto Paldanius, Director - Energy Storage at Wärtsilä Energy Solutions, not all islands are suitable for renewable energy solutions to be built.

“You need large surface areas for installing wind or solar-energy solutions, something in the range of 0.5 to 2 hectares per MW being produced. And this surface should be as level as possible. Small islands generally don’t have too much of that kind of space,” he says.

Can hybrid energy solutions help in the transition?

This is a particularly daunting problem for islands, considering that they are not connected to the mainland, which means they cannot rely on other energy grids to make up for any shortfall. One way to guarantee a stable grid is to use hybrid energy solutions.

For instance, islands deploying solar energy can consider using utility-scale hybrid power plants where solar power is complemented by an engine unit that runs on oil, natural gas or biofuel. These plants can run on solar power when available and switch to the engine unit during the night or during overcast days when the solar energy is not as plentiful.

“Another solution is to look at right-sized, optimised storage” points out Paldanius. These storage solutions allow islands to store excess power, to be used when solar or wind power has died down. Companies like Wärtsilä have taken this a step further, using technology to develop smart energy management systems for islands.

“We offer energy management systems through our newly acquired company, Greensmith Energy,” says Paldanius. “We can also include weather forecasting, so that we know how much sunlight would be available tomorrow. This gives us a good idea of how much engine is going to be operated and we can optimise the utilisation of energy storage accordingly. It helps us to optimise the energy system well in advance, thus helping also to keep the energy grid stable.”

All eyes are now on how successfully these islands use these smart technologies to switch to renewable energies.

“Typically, most countries have so far relied on borrowing energy from neighbouring grids or buying it outright from other countries when needed. In the islands, you cannot borrow or buy energy that easily, because you are isolated,” Leino explains. And the way in which they solve the problem will hold major learnings for countries on the mainland who are struggling to move away from fossil fuels.

In the meantime, with renewable energy technology continuously improving, the costs and infrastructure needed to install renewable-energy grids on islands are coming down with each passing year. The next three decades may very well see islands leading the way towards 100% adoption of clean energy.