Is underwater farming the way forward?

The rising demand for food and the adverse effects of climate change on agriculture demand new solutions. The benefits of hydroponic farming are well-researched, but could the ocean floor feed us all?

On its surface, the Italian Riviera, with its sandy beaches and multi-coloured umbrellas, is rarely associated with vegetable farming. But just off the coast of Noli Bay in Liguria, only a few metres below the surface of the azure waters, lies a secret garden. Resembling something out of a sci-fi movie, green produce grows rapidly inside acrylic pods that live 10 metres underwater. While it sounds like a futuristic movie, Nemo’s Garden may very well be a window into the future of sustainable agriculture.

A decade has passed since Sergio Gamberini, the Italian founder of diving equipment firm Ocean Reef and president of Ocean Reef Group, wondered if he could combine his passion for scuba diving and gardening by growing basil underwater. To answer his own question, Gamberini built a single biosphere anchored to the bottom of the ocean and, to his surprise, managed to grow a decent crop. Over the past ten years, Nemo’s Garden has grown to six underwater biospheres, each equipped with 10-metre spiral tubes containing 60 seedbeds that now grow a variety of produce – from strawberries to tobacco.

“It started as a garage experiment,” says Sergio’s son Luca Gamberini, who serves as Vice President for Sales and Marketing for the ambitious endeavour. “This year we've started a partnership with Siemens, which will give us a huge acceleration in terms of innovation cycle and give us the possibility to scale up the project. We have now reached a point where this could be commercialised.”

We believe that alternatives to the traditional way of farming can reduce pollution and CO2 emissions.

As the project has grown, so has its purpose beyond pure curiosity. “Traditional farming, which in itself is not able to provide the full scale of food for human beings, has a submerged cost – the environmental cost – which is simply not included in the price,” says Gamberini. “We believe that alternatives to the traditional way of farming can reduce pollution, CO2 emissions, urban encroachment, and, in turn, reduce the intensive use of our very limited arable land.”

The vast ocean floor could provide farmers with an enormous landmass that currently goes unused. “If we access just a small percentage of that, it would be an incredible increase in terms of surface for agriculture,” says Gamberini. “And if we farm the hydroponic way, then we do it as sustainably and responsibly as we can.” 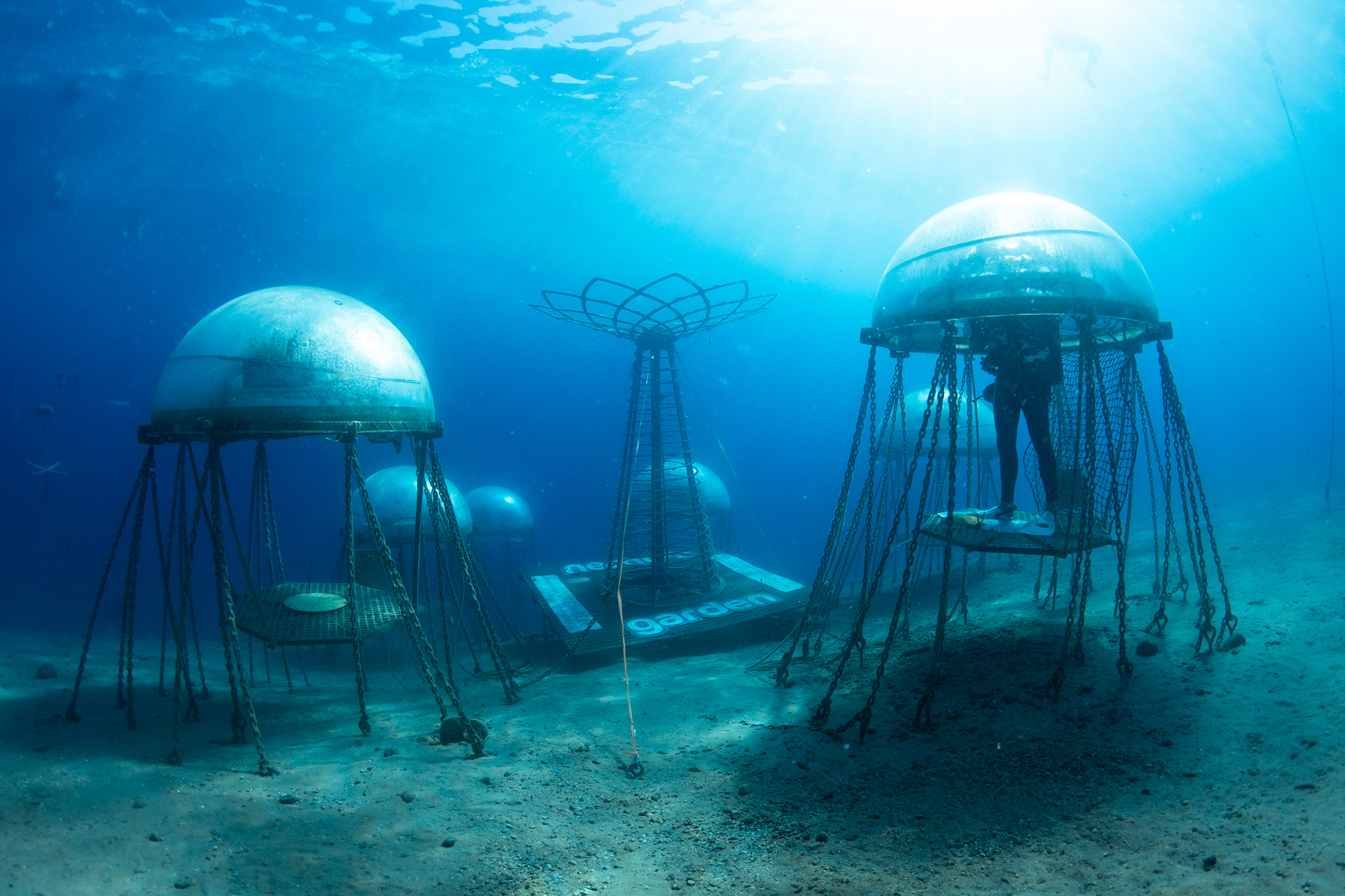 Is hydroponic farming the answer?

As climate change, water consumption, soil erosion and the rising demand for food place more of a strain on traditional agriculture, one solution often being floated is hydroponic farming.

Hydroponics have advantages over field farming, as, instead of using soil for plant nutrition, crops are fed nutrient-rich water, which can be recycled and used repeatedly. In this process, hydroponic and vertical farming uses an estimated 98% less water and 99% less land, while producing more than 200 times more crops than traditional farming.

So, why are we not all farming hydroponically?

It’s a complex solution to a complex issue, says Dr. Kellie Walters researching plant physiology at the University of Tennessee. “With controlled environment production, like greenhouses and vertical farms, the main advantage is that you can very precisely control the growing environment to elicit whatever response you want from the plant,” explains Walters, whose research focuses on how to manipulate the growing environment to improve crop yield and flavour.

“We can change the light intensity, for example, and drastically alter how basil tastes, or the nutritional value of lettuce or kale,” she goes on.

But while it is true that a controlled environment can yield produce quicker, and in many cases a better product, hydroponic farming is not a one-size-fits-all solution. “Even though hydroponic farming is increasing, it's not a dominant form of how we produce our food because there are a lot more input and operating costs,” says Walters. “If you're growing produce outdoors, in the field, the input costs are a lot less.”

Gamberini says the basil produced in Nemo’s Garden has a flavour more intense than anything grown above ground. “We've seen that happen to many species of plants - from beans to strawberries, and stevia to medical and culinary herbs,” he says. However, the produce grown in Nemo’s Garden currently costs an estimated ten times more than traditionally grown vegetables. 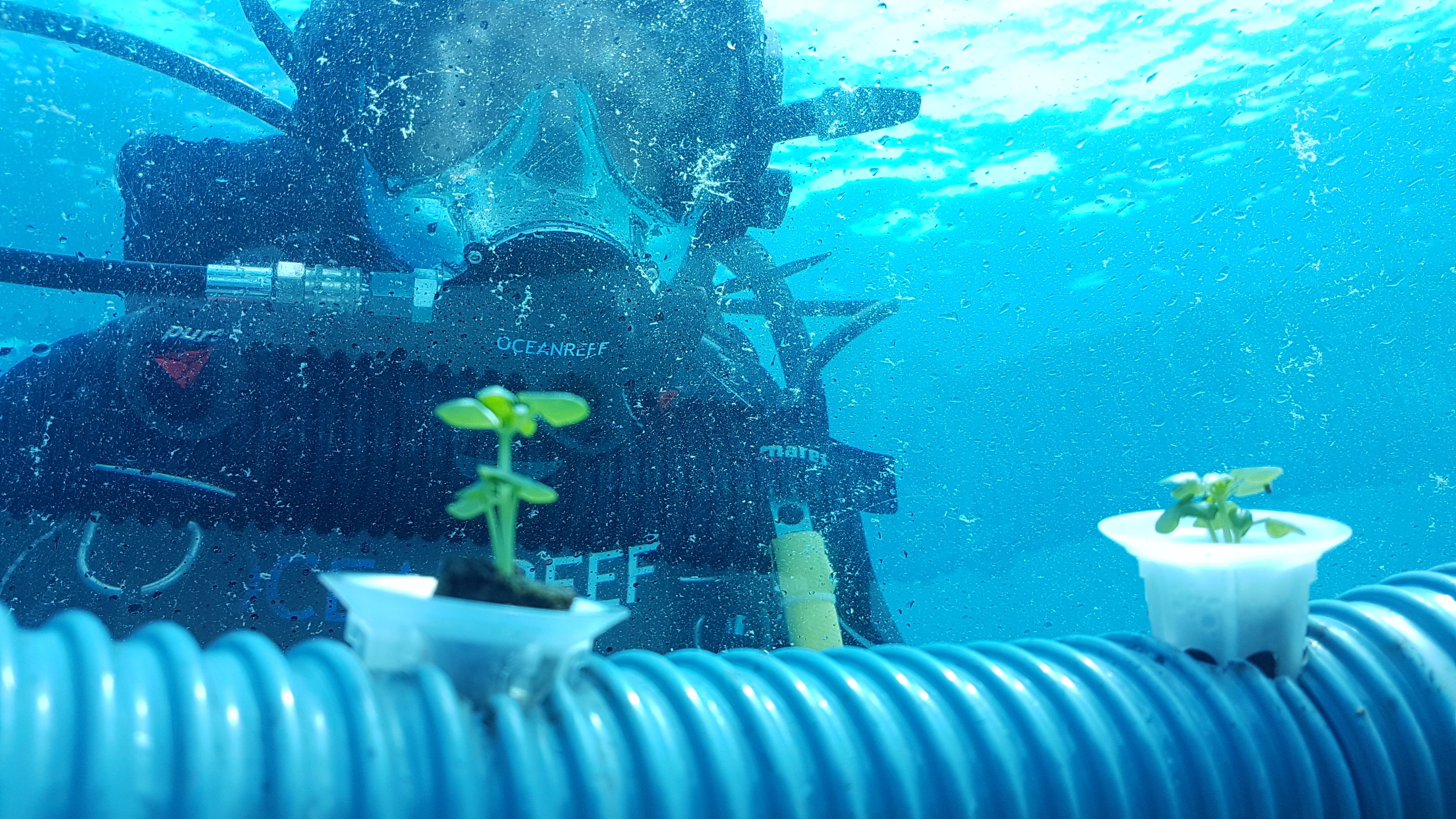 The immediate goal for a research project like Nemo’s Garden is not to feed the masses but investigate a resource-efficient agricultural model that may have benefits beyond the ecological. “Ultimately, by installing something so groundbreaking there is an opportunity to create a circular economy. You create an alternative job market,” Gamberini says.

Another advantage of hydroponic farming, both above and below ground, is the geographical diversification of crops and produce. “A lot of crops have very narrow geographical locations where they are grown, and if we can diversify production geographically, that's good,” Walters says. “To do that in areas that maybe don't have the greatest soil, hydroponic production is an option.”

Even though hydroponic farming is increasing, it's not a dominant form of how we produce our food because of input and operating costs.

The greatest challenge with any global industry is its environmental impact, particularly on the maritime ecosystem, which is already facing several challenges. By utilising water obtained through the desalination of seawater, and growing their plants without soil or pesticides, the footprint left by the project is mainly the biological residue from the plants.

In the case of Nemo’s Garden, there has even been an unforeseen upside to their project: a 150% increase in marine population, who have made the biospheres their home. “From what we've seen, and we've researched our environmental impact, there was nothing present on the ocean floor when we installed the biospheres,” Gamberini confirms. “Now it's crawling with life.”

Yet, Gamberi is well-aware of the pitfalls of commercialisation. “Anything that we do on a larger scale can be destructive. Cost reduction comes at a toll,” he says. “I think the responsibility comes from the company. Companies need to be incentivised to really do the best they can in an ethical way and be transparent about it. We should all do our part.”