The principal function of a Propulsion Control System (PCS) has traditionally been to provide a safe operation of the vessel’s propulsion plant, by means of remote control, monitoring and either prevention or mitigation of malfunctions in the related equipment under all operational conditions. While this remains unchanged, vessel operators these days are increasingly looking to automation systems to support their efforts to reduce emissions, enhance fuel efficiency, and optimise operations.

Wärtsilä provides different PCS systems, one for two-stroke and another for four-stroke applications. Here we take a look at the newest details and developments.

The Wärtsilä NACOS Platinum PCS is a comprehensive system of control devices, displays, indicators, and modules designed to suit the various propulsion configurations on a modern ship. It is specifically designed for larger, ocean-going vessels with two-stroke engines.

This summer, Wärtsilä released the next generation of its Wärtsilä NACOS PCS Platinum, which delivers the same advanced functionality as the previous version but in a considerably more compact format. A major new functionality is the support for two-stroke dual fuel engines.

“Space on board a ship is limited and the Engine Control Room (ECR) in particular tends to get very crowded,” explains Vincent Feng, Technical Manager, Automation/PCS. “This is why we have minimised the size of the PCS, creating more space for engineers, as well as freeing up space for other equipment.”

The new PCS consists of a series of modules that are mounted inside the ECR console. This reduces the amount of wiring and frees up space. The new PCS also features Wärtsilä’s in-house developed, maintenance-free, telegraph system.

The new NACOS Platinum PCS has been already contracted on a number of projects, among them a series of tankers, as well as container vessels and LPG carriers with modern two-stroke dual fuel engines.

Meanwhile, in the four-stroke engine segment, Wärtsilä has launched an innovation known as Wärtsilä EcoControl. Applicable to Wärtsilä four-stroke engine applications with variable propeller speed operations and the Wärtsilä ProTouch PCS, EcoControl uses a smart control system to combine the optimal propeller pitch with the optimal engine load, thereby ensuring that fuel consumption is reduced to its most efficient level during transit sailing modes. It constantly targets the lowest possible fuel consumption while managing the dynamics of electric load variations and continuously changing environmental conditions.

EcoControl also features cruise control, which enables the system automatically to adapt to a set speed, operating as fuel efficiently as possible without manual intervention.

Since the start of this year, Wärtsilä EcoControl has been part of a pilot project on board a 17,500 DWT chemical tanker. Based on operations for this type of vessel, the projected fuel cost savings add up to EUR 30,000 per year. Enhanced fuel efficiency results in fewer exhaust emissions and reduced environmental impact. For more high-powered vessels, such as a 55,000 GT RoPax, the fuel cost savings may be as high as EUR 100,000 per year.

“The fuel savings speak for themselves,” van Mierlo notes. “They prove that instead of treating the two systems as separate entities, there is huge potential in implementing an engine and a propeller as an integrated propulsion system from a single supplier.” 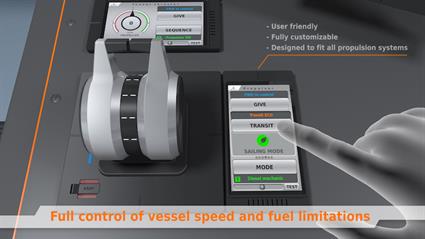 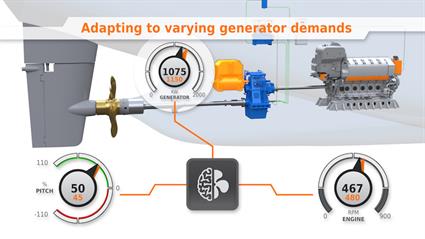 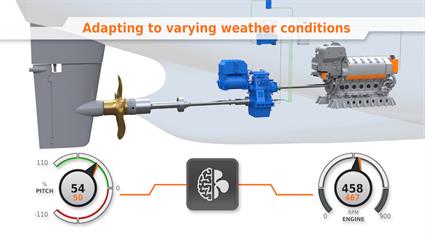 ProTouch gives power to the user

Wärtsilä ProTouch is a complete system of levers and touch screen interfaces, working as the human interface of the PCS.

It represents a modern and compact state-of-the-art response to market demands, and its intuitive functionalities give the power to the user.

ProTouch comes in two display sizes and six types of levers, which have been developed using a modular approach. It has won the Red Dot Design Award, with the jury complimenting the system as ergonomically well thought. It also received praise for reducing complexity in an impressive manner and creating a comfortable environment.

Around the world, the speed of development in electrics and electronics is increasingly more and more rapidly. As a result, the lifecycle of these types of components – such as those found in a Wärtsilä PCS – is becoming ever shorter. In some cases, it may even be less than five years.

“While a propulsor has an expected lifespan of some 30 years, it goes without saying that the hardware and software in a PCS will become obsolete more quickly,” explains Albert Blom, Product Manager Propulsion, Wärtsilä Power System Services. “It is up to us to prevent our systems from being rendered inoperable, should a critical component fail without a replacement part being available.”

Wärtsilä Power System Services has developed a so-called lifecycle roadmap that seeks to guarantee a lifecycle of at least 15 years on its PCSs.

Initially, Wärtsilä maintains sufficient stocks of replacement components, within the first 10 years of the product lifecycle. When this is no longer possible, an upgrade kit, containing the most recent available technology, is made available. After 15 years, the customer will have the option to purchase a replacement control system with equivalent or customised functionality.

In short, Wärtsilä supports its customers throughout the entire lifecycle of the supplied equipment

“We’re constantly seeking to mitigate the impact of obsolescence issues,” Blom says. “We do this by maintaining adequate stocks, ensuring that we have upgrade kits available, and, ultimately, helping our customers with a replacement for their control systems.”