Home
Insights
Article
In Conversation on the future of GDP

In Conversation on the future of GDP

GDP, or gross domestic product, is the most commonly recognised metric for measuring economic development of countries, but is it the best way? What are the alternatives? And is there a role for business to play a role in crafting new indicators? Robert Costanza from the Crawford School of Public Policy at the Australian National University and Rutger Hoekstra, from the Institute for Environment and Human Security of the United Nations University give their insights on GDP and its future.

Is there an urgency to replace GDP?

Hoekstra: GDP is a pretty good measure if you want a measure of the economic development of a country. I think the real problem arose after the Second World War, when we started seeing this as a goal of society. So basically, if a country grows fast, we think that's good, and the government that oversees that growth is a good government. But I think everybody realizes that the real goals of human life and society are actually very different. I usually make a distinction with three goals. The first is wellbeing – are people happy on the planet at the moment? Are they meeting their basic needs? The second is sustainability – will future generations be able to meet their wellbeing needs? And the third is equity – within a country, is there a certain fairness in terms of distribution? By focusing all the time on GDP, we're not focusing on the real goals of our society. I think the real problem with GDP is not necessarily what it's measuring, but what it has become to our society.

Costanza: GDP was never designed as a measure of societal progress, and so we have been misusing it for that purpose. As Simon Kuznets, who was one of the architects of GDP warned, “the welfare of a nation can scarcely be inferred from the measurement of national income, as defined by GDP.” I think that's where we got misled. After World War II, we had to get our economies going again. But times have changed, and now the limiting factors are no longer goods and services production. The limiting factors are natural capital and social capital. And our goals really should have been all along and should continue to be, the wellbeing of humans and the rest of nature and recognising our interdependence with the rest of nature. We need sustainability. We need equitable and fair distribution of wealth and resources. And we need efficient allocation of the resources that we do have. That means considering all of the things that contribute to our wellbeing, and that goes beyond the things that are traded in markets.

One of the arguments for continuous growth is that with that growth, we are then able to provide wellbeing to our people. How do you counter that argument?

Hoekstra: That's one of the classic narratives. Of course, it's true that if you look at 200 years of developments, economic growth did in fact make it possible to create social welfare systems, education systems and healthcare systems. But there is a certain limit to that development. And at some stage, people begin choosing other ways of creating their wellbeing. One of the things I find most interesting is the number of hours that we've worked. If you look at two centuries of work, for example, we used to be used to working seven days a week, then it went to six days. After the war, it became five days. And I think in a lot of Western countries, actually, we are trending towards a four-day workweek. That is a clear pattern in history that shows that when we do become richer, we do at some stage start to choose wellbeing over more income.

Costanza: it's been shown that it's not mandatory to have growth in the conventional sense in order to have improving wellbeing. So what we really want to improve is wellbeing that does not necessarily take more material production and consumption. It does in some cases and in some countries, and I think the situation in the world today is that some countries could use to have less material production and consumption, other countries could use to have more, but it has to be of a certain kind – a kind that does not have the negative side effects of our current modes of production on our natural and social capital. 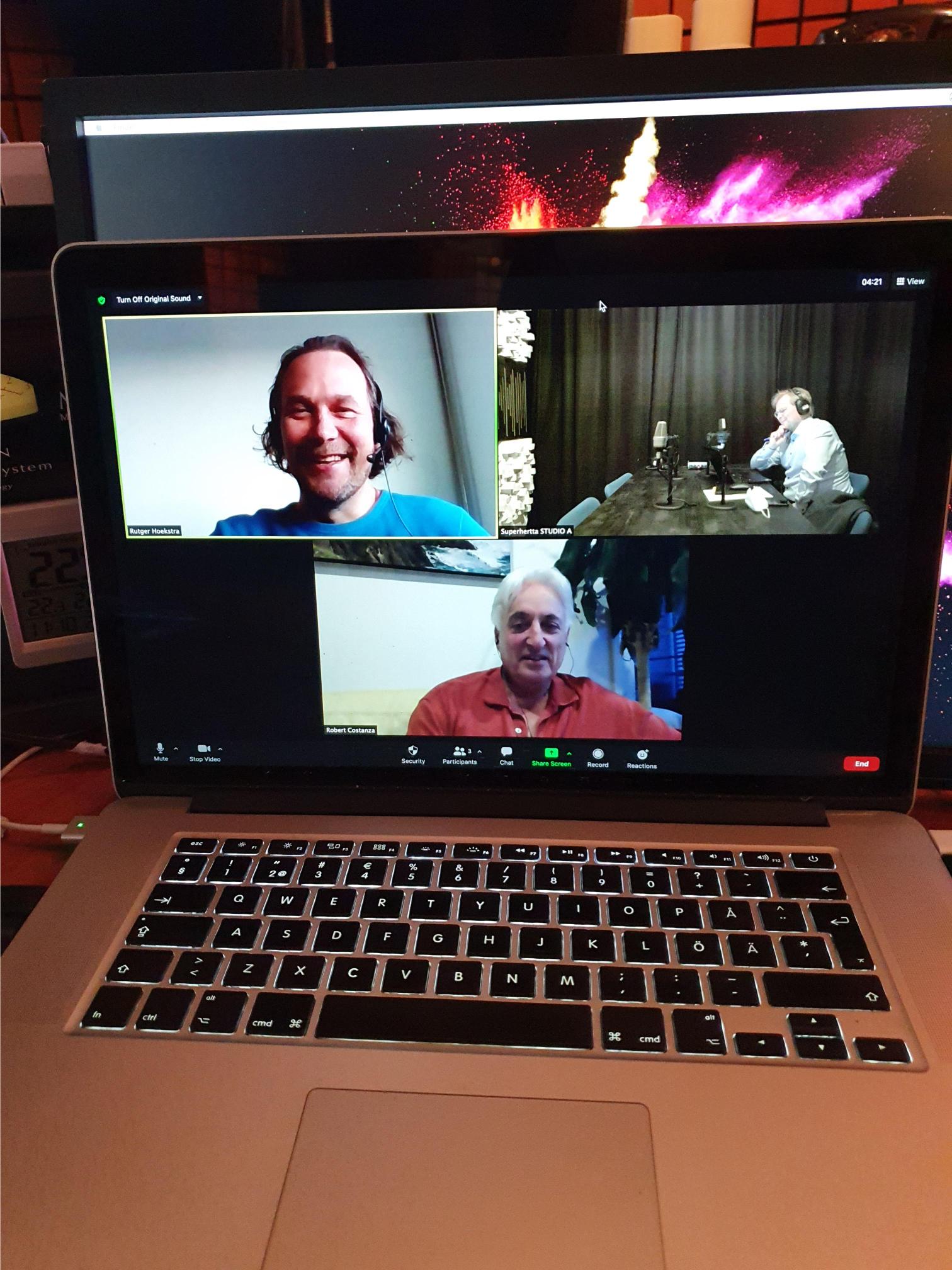 GDP is extremely well founded, it's universally applied, so how can we make change? And what kind of indicators would policymakers be willing to apply?

Costanza: I could point out a couple. One is something called the genuine progress indicator (GPI) which was developed by Herman Daly and John Cobb back in 1989 and has been applied in many countries. It starts with personal consumption, which is a major component of GDP, but then it weighs that by the distribution of income, recognising that equity is really important to wellbeing. And then it adds a few things that are left out of GDP, like the value of household labor, the value of volunteer work – things that are really contributing to the wellbeing of society but aren't marketed, so they're not counted. And then it subtracts a bunch of things that shouldn't be counted as positive – the cost of crime, the cost of pollution, etc. And when you apply that indicator, you find that in many countries, since about 1980, or so, even though GDP has continued to go up, GPI has leveled off and even declined slightly because of growing inequality, growing environmental damage, etc.

What type of professionals would we need to develop something that would contribute to a more balanced system?

Hoekstra: I think it’s really important that we stop approaching this just from the perspective of the economist, and actually see that the global problems we're facing are not necessarily the problems that economists are most knowledgeable about. I think it should be an interdisciplinary process. Second, there is already so much data collection going on that just getting together and seeing the various perspectives that are out there would be tremendously impactful. Personally, I think what would be an ideal outcome of that process is that you could imagine we have an indicator for wellbeing, an indicator for sustainability for the future, and an indicator for equity, then we add those three components into one indicator.

Costanza: I think that's the kind of consensus building that we need. If you look back, GDP has really only been around since the end of World War II, with the Bretton Woods system conference. They developed the World Bank and the IMF, and they instituted GDP as a primary measure of progress. We need a new Bretton Woods for a new situation. We need the full spectrum of disciplines and stakeholders to come together, but I think that's certainly doable. And I think it's urgent that we do it.

Do you see that corporations would have a role to play in support for the governments and countries?

Costanza: Absolutely. There are many companies that are beginning to see these issues much more broadly, there's the whole B Corp movement, where corporations are seeing themselves back to the original purpose of corporations, which was to provide benefits for society, not just to make financial profits. I think indicators that we would come to a consensus on would be ones that would be applicable at multiple scales, not just the national scale or the global scale, but also at the scale of businesses, at the scale of communities, etc. I think we want essentially the same things at all of those scales.

As to the question of do we need an aggregate indicator or do we need a whole dashboard of indicators, I don't think that's an either/or question. When you're driving a car or flying a plane, you need the dashboard, you need to know what all the indicators are. But you also need to know where you're going. So we need to put those together and ask if we’re making progress toward our goal, and that comes back to building this shared consensus about what our ultimate goals are for the economy, and society.

Hoekstra: I think companies play a really important role in the narrative that is told in society. Starting from the 1970s and 1980s, because of economic thinking, such as from Milton Friedman, the role of the corporation was very much defined as being there for the shareholders. So the role of a CEO of a company was basically to provide as much value to the shareholders as possible. And when CEOs started to echo that goal, and to form their companies according to those goals, that had a very large impact on society. I think the great thing about this day and age is that more and more CEOs are actually echoing that the goal of a company is not just to create shareholder value, but also to look at the other stakeholders that they're servicing with their products and goods. And the more CEOs say that; the more goes to the employees and to the general population.

Companies need to be very mindful of where they now invest for the future. How do we convince corporations, governments and countries to make this switch?

Costanza: This gets back to my comments before about how we need to refocus on the shared vision of what kind of world we want. There is a group called the Wellbeing Economy Alliance that tries to integrate all of these different institutions, individuals, that are all headed in the same direction, around the shared goals. And there's a government component to that called the Wellbeing Economy Governments. And the idea there is that here is a lead group of governments that have said our goal is not just to maximise GDP, our goal is really to maximise wellbeing. So, I think as that group of governments grows as that alliance grows, I think we will reach a tipping point at some point where that becomes the dominant way of thinking.

This interview has been abridged. To hear the complete conversation, please listen to the podcast.