When people talk about hybrid energy solutions, there are usually three alternatives. The first involves engine hybrids where a solar photovoltaic (PV) plant is added to a diesel plant for added capacity. The second solution involves adding energy storage (using batteries) and PV to an existing diesel plant, also for added capacity. And the third option, which the world will see more of coming years, is a pure solar hybrid plant coupled together with the latest in energy storage technology.

This last solution, a hybrid solar PV and storage solution, was unveiled by Wärtsilä in Munich, Germany in June 2018 at the annual Intersolar Europe conference, a major international event for the renewable energy industry.

The buzzword for this solar PV and storage energy solution is: “renewables as baseload,” an energy production scenario that is not only climate-friendly and increases system resilience and efficiencies but also can be supported by a power producer’s existing grid infrastructure, hence setting a new hybrid standard.

The trend worldwide is very clear. Renewable energy sources, like PV, are being installed at a record rate around the world to accommodate the need for a cleaner energy mix and a growing world population and urbanisation. According to the International Energy Association (IAE) and its World Energy Outlook 2017, a city the size of Shanghai is added to the world’s urban population every four months. And by 2040, total global energy generation capacity is forecast to increase by 60%, and renewable energy sources will make up more than 45% of that total. With growing production volumes and continuous innovation, the cost of renewable energy technologies is improving and in many cases, already today, represent the most feasible alternative.

In another recent market outlook, compiled this time by Bloomberg, which forecasts global energy sources between 2017 and 2040, coal, gas, and nuclear power will progressively diminish while solar and other renewables will gain massive traction. (See figure 1)

To achieve this added penetration of climate neutral renewables in the global energy sector, it is crucial for the industry, in general, to optimise system performance in every aspect of power generation across the board. 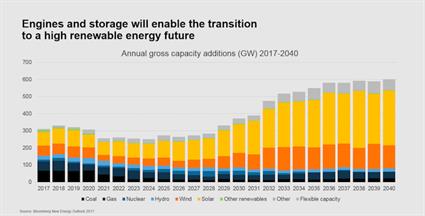 Wärtsilä Energy Solutions is doing exactly this by reengineering some of the critical parts of the PV power generation ecosystem including storage. And it involves fine-tuning the software and hardware to optimise system performance, market participation, and maximise customers’ return on investment.

To make renewables the new baseload of power generation means applying many of the same engineering principles to PV generation as is already done to fossil fuel-based methods, all the while taking into account the traditional energy usage fluctuations that apply during any given day. The trick though with PV is that the energy is generated in DC current and needs to be converted to AC current. This is of course handled by a traditional power inverter but when batteries are added to the mix, which are also DC-rated, the situation gets additionally complex.

One challenge is an energy efficiency loss of about 15% in the ‘round trip’ between DC to AC and back to DC to recharge the batteries. Or put another way, the batteries which get charged in DC current must also be able to discharge into the AC grid which requires a novel use of converters and inverters.

In the quest for best available technologies, Wärtsilä acquired Greensmith Energy in 2017 which develops GEMS, an advanced energy management system, currently in its fifth generation, enabling new and modern monitoring, and operation of energy generating and storage applications. Greensmith Energy makes use of the latest advancements in power electronic technologies, battery and storage technologies, as well as machine learning and cloud computing to harness renewable energy and optimise it for the grid.

One of the main stalwarts of Wärtsilä’s Hybrid Solar solution and GEMS is the usage of bi-directional inverter technology to seamlessly integrate PV panels with the grid. Powered by GEMS software, this highly integrated system enables dispatchable energy on demand.

More to the scenario

A major possibility with this solar hybrid set-up is its ability to perform both the energy shifts while offering ancillary services for grid stability support. This double duty or services stacking enables increased revenues and improved feasibility. Shifting energy matches the needs represented in a typical electrical usage scenario - lower usage during the day, higher at night when people come home from work.

While Greensmith’s GEMS platform is used to optimise this complicated load forecast operation, which also takes into account other parameters such as market pricing, market conditions and even weather conditions down to minute-by-minute forecasts, it also includes web and cloud-based computational analysis allowing for intelligent revenue stacking. And by making energy storage an on-demand functionality, the overall lifetime of the batteries and PV plant is extended.

All of this taken together means that the current advances in hybrid solar technologies is a growing, viable, and future-proof energy production system that is also CO2 neutral for both power developers and regulated utilities.