Working in and between various currencies poses unpredictable risks to global businesses. Wärtsilä has proven to be award-winning in preparing for them; now, we hear what Wärtsilä’s Group Treasury Dealer Paul Malmström has to say about sustainable foreign exchange practices.

Working in and between various currencies poses unpredictable risks to global businesses. Wärtsilä has proven to be award-winning in preparing for them; now, we hear what Wärtsilä’s Group Treasury Dealer Paul Malmström has to say about sustainable foreign exchange practices.

Everyone who’s travelled across currency borders knows that a lot is up to luck. What you get for your money depends on the exchange rate – and at any point in time, it might be wildly different to what it was a week or a month ago.

For a regular Joe, a few dozen euros or dollars might not ruin a holiday budget, but for multinational corporations, the changes in currency rates might mean millions of euros in losses. Thus, the risk must be managed to ensure that the business isn’t exposed to financial risks because of fluctuations in exchange rate.

Foreign exchange (FX) risks arise from various sources, such as cash flows that are affected by changes in exchange rates, loans and deposits that are either payable or receivable in foreign currencies, or in bidding for or investing in foreign projects. Wärtsilä is familiar with this, after all, not only is it located in more than 80 countries, it also has about 115 currencies in its global enterprise resource planning system.

“FX risks are significant, not just for companies as big and complex as Wärtsilä, but also for smaller ones,” says Paul Malmström, Dealer at Wärtsilä’s Group Treasury. “Fortunately, there are various ways to manage the risk, depending on the nature of the company’s cash flow.”

Malmström, if anyone, should know what he’s talking about. In March, this year, Wärtsilä with Malmström as its representative was announced the Finnish Champion in currency hedging in a competition organised by the Nordic financial services group Nordea.

No room for speculation

In practice, all money coming in and out of Wärtsilä goes through the Group Treasury. Speculation with currency rates is forbidden for Wärtsilä companies, and all foreign exchange exposures are, if allowed by local regulations, hedged with the treasury.

In FX, hedging is an effort to mitigate the risk of unfavourable currency rate movements. This can be done by, for example, protecting assets with an FX forward contract, in which the counterparties agree on a predetermined currency rate for a future date.

“The realisation of FX losses has a negative impact on the cash flows, margins, and profits of the company,” Malmström says. “The hedging of exposures improves the forecasting of a company’s cash flows and protects the margins.”

All Wärtsilä companies deal directly with the Wärtsilä Group Treasury, which then nets the transactions and makes external deals with Wärtsilä Relationship Banks to mitigate the Group’s FX exposure.

“This increases Wärtsilä’s attractiveness in the eyes of the bank, too, because volumes are much larger and the counterparty risk is reduced,” says Malmström. “As a result, the Group receives much more competitive pricing than individual Wärtsilä companies would if they were dealing directly with a local bank.” 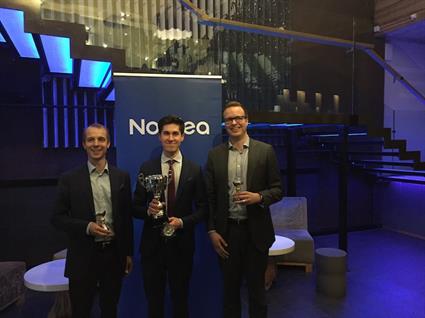 Wärtsilä with Paul Malmström (middle) as its representative was announced the Finnish Champion in currency hedging in a competition organised by the Nordic financial services group Nordea.

A winning strategy for Wärtsilä

Malmström’s expertise in currency hedging is a result of years of experience. He developed an interest in exchange rates as a university student, and although his first job at Wärtsilä wasn’t at the Group Treasury, he jumped at the opportunity as soon as one occurred.

“It is extremely interesting to keep a keen eye on the financial market and Wärtsilä’s business segments and see the impact they have on each other,” he explains.

The competition by Nordea, organised for the first time, provided Malmström with a chance to test his skills against peers from other firms by making them mitigate the foreign exchange risks of an imaginary company. His top spot was followed by industrial machinery company Metso, and the third place went to pulp and paper manufacturer Stora Enso.

Malmström’s winning strategy was based on analysing the imaginary company’s cash flow and used currencies, and choosing the right kinds of protection methods. On top of personal pride, he sees the win as an acknowledgement of Wärtsilä’s efforts in safeguarding its business – and he’s willing to defend his title at next year’s competition, if given the chance.

Some might get cold feet for being responsible for such immense piles of money. However, Malmström is used to dealing with big numbers.

“Obviously it can be a tiny bit baffling to have a billion Japanese yen in hand, but as long as you understand what’s going on and how to keep the money safe, it’s just another figure amongst others.

The most common foreign exchange deals