In a world driven by hyper-connectivity, power companies need to keep pace with rising energy demand while being environmentally friendly. Wärtsilä’s energy system integration solution ‘Engine+ Hybrid’ is an affordable, efficient, speedy, and reliable way to move towards a 100% renewable energy future using both old and new generation units.

In a world driven by hyper-connectivity, power companies need to keep pace with rising energy demand while being environmentally friendly. Wärtsilä’s energy system integration solution ‘Engine+ Hybrid’ is an affordable, efficient, speedy, and reliable way to move towards a 100% renewable energy future using both old and new generation units.

In August 2018, Hungary’s Sinergy Kft, a subsidiary of ALTEO group, began participating in the country’s electricity market by providing frequency and secondary regulation to the national grid. The unit already had three Wärtsilä 34SG engines running on natural gas and was additionally powered by a Wärtsilä 6MW/4MWh Battery Energy Storage System (BESS).

The unit was Hungary’s first energy storage installation, and it helped ALTEO increase its revenues and participate in the electricity trading market. It was also Wärtsilä’s first integrated Engine+ Hybrid installation with Greensmith Energy’s Management System (GEMS) (Greensmith Energy is a Wärtsilä technology).

Alejandro Schnakofsky, Director of Product Management, Energy Storage and Optimisation, Wärtsilä Energy Business, describes the system, which pairs a battery with a production unit to maximise efficiency and minimise fuel consumption, as similar to a hybrid car. He notes that technology plays an important part in the unit.

The Engine+ Hybrid solution replaces the traditional system of relying on spinning reserves to cover sudden changes in generation or load that produce inefficiency. The innovative GEMS platform enables producers to configure or reconfigure power plants with an optimal resource mix and help them achieve a wide range of goals, including increasing reliability, optimising operating costs and reducing environmental impact.

“Engine+ Hybrid explores the capabilities and possibilities of energy storage. It is just one application, but it is like a jack- of-all-trades that does many things at one time. Through this solution, we have touched upon several things, like spinning reserves, frequency regulation and voltage control,” says Risto Paldanius, Business Development, Energy Storage and Optimisation, Wärtsilä Energy Business.

Engines and battery energy storage are fully integrated into one power plant solution, the Engine+ Hybrid.

“These can lead to greater renewable penetration in the system because engines and energy storage are the most flexible generation assets that exist. When you add more renewables in power systems, variability increases. Engines and storage are needed to bring in more flexibility and enable this transition,” he adds.

Here is how GEMS helps improve the efficiency of engine power plants by hybridising them:

Assume that a power plant with a load of 40 MW has five engines of 10 MW each. To ensure continuity in power supply in the event that one engine trips, the operator typically has to run all five engines at 8 MW output (80% load) rather than run four of them at full capacity. In this case, the fifth engine accumulates unnecessary running hours, resulting in higher maintenance costs. It also results in lower operational efficiency because the engines are running at less than full capacity.

In contrast, the Engine+ Hybrid model allows the operator to service the 40 MW load with just four engines running at full capacity and batteries for spinning reserve replacement.

Speed is of the essence in the Engine+ Hybrid solution. In the event an engine is tripped, the battery provides the power generation lost while the stand-by engine is automatically started by GEMS. Once the engine is up to speed and synced to the grid, GEMS automatically phases out the battery and slots the engine in, resulting in a full recovery of the system and avoiding a blackout.

“It is only through the orchestration offered by GEMS that this complex operation is possible. It controls the entire system from batteries and engines to renewable generation,” Schnakofsky explains. 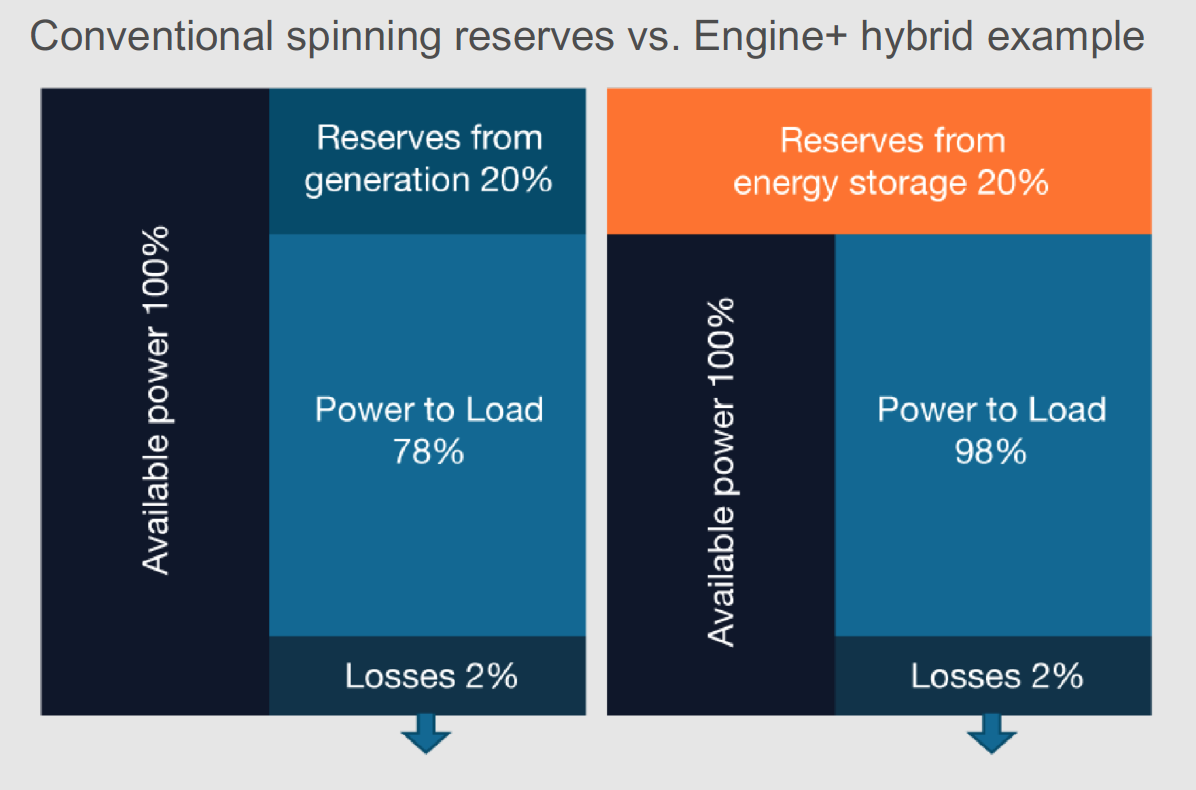 In islanded grids with contingency reserve requirements, the Engine+ Hybrid solution increases the power to load capacity. This is accomplished as system reserves are provided through the energy storage system instead of maintaining spinning reserves through the engines.

Schnakofsky says systems like these are critical to integrating a higher percentage of renewables in power generation.

“A world with 100% renewables is only possible with flexible and firm generation,” he says. “Flexible engine power plants that can provide power in minutes will be pivotal to enable high levels of renewable energy penetration. This means engine power plants that can start and stop fast while maintaining a high operational efficiency will be in high demand to materialise a more sustainable energy system.”

One example of how such a system has improved efficiency can be found on the small Caribbean island of Bonaire. Local energy provider ContourGlobal Bonaire has a 25 MW power plant that generates energy using both engines (15 MW) and wind (11 MW). Until last year, this plant was generating between 12-15 MW, with loads peaking at around 18 MW during the summer. ContourGlobal was reported to be “curtailing wind because its engines were needed to provide additional spinning reserve for wind and also for sudden increases of electricity demand.”

Late last year, Wärtsilä began integrating a 6 MW energy storage system in this plant. Its Engine+ Hybrid solution included batteries and intelligent inverters along with access to GEMS for primary and secondary grid controls while integrating multiple power generation assets including existing wind, solar and storage capacities. By June 2019, the first phase of integration was complete, and the island no longer had to curtail wind resources.

Also thanks to the solution, renewable energy penetration has almost doubled, and the system is prepared for additional capacity to accommodate peak demand during tourist season.

GEMS integrates multiple power generation sources and seamlessly leverages the most cost-effective source in real-time while maintaining stability of the grid and respecting operating requirements.

“We are hybridising engine power plants with energy storage even in cases where the engines may not be supplied by us but by competitors. Our solution is perfectly suited for island microgrids and remote industrial self-generation sites such as mines and cement factories,” says Paldanius.

“Typically, the fuel cost in these places is quite expensive. What makes Engine+ Hybrid attractive for these users is the fact that it increases power system efficiency i.e. utilises less fuel. There are cost savings also on maintenance and additionally lower emissions. These all are attractive attributes for short payback times on investments,” he adds.

Engine+ Hybrid is a smart investment that helps power producers future-proof their assets and businesses. It is a next- generation solution that uses current technology in the quest to make a 100% renewable energy future a reality. Locations like Hungary and Bonaire are already realising the system’s potential. 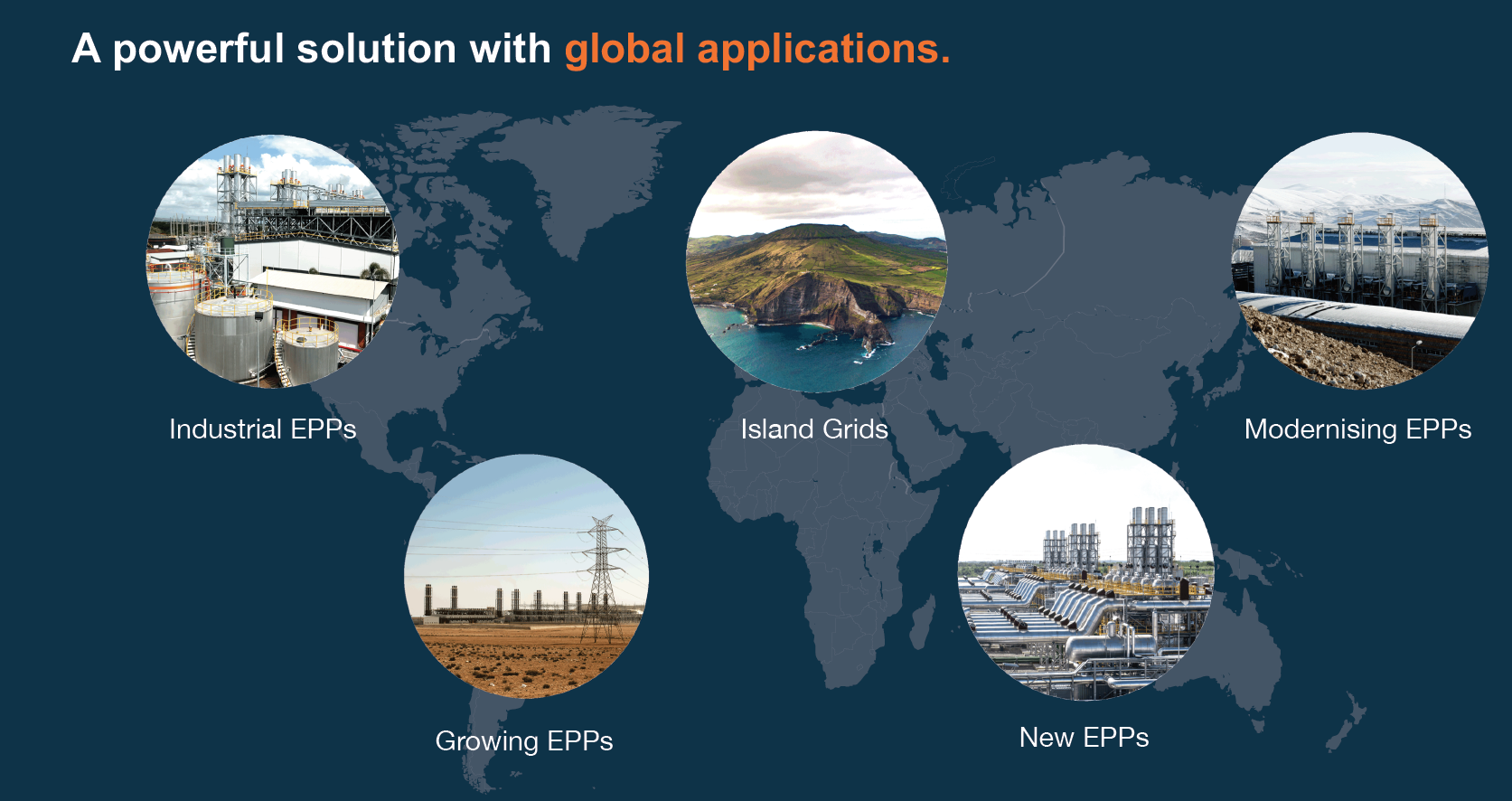 The Engine+ Hybrid solution is applicable in a number of different market segments. The solution can be provided for new builds as well as being retrofitted into any existing power plant.