Fuels of the Future

How do you create carbon neutral, synthetic fuels? Where can they be used? What can be done to accelerate decarbonisation and eventually replace the use of fossil fuels altogether?

How do you create carbon neutral, synthetic fuels? Where can they be used?  What can be done to accelerate decarbonisation – and, eventually, to replace the use of fossil fuels altogether? - Meet Power-to-X, the new superhero.

Decarbonisation and the fight against climate change is entering a brand new chapter. As the world moves towards power systems based on 100% renewable energy sources, fresh solutions are needed to strike a proper balance in the global energy production.

Technologies for replacing fossils exist already today. With a carbon neutral society finally in sight, Power-to-X is one of the most exciting game-changers in the energy industry today. Basically, Power-to-X is a process which allows the creation of carbon neutral and renewable synthetic fuels by capturing CO₂ from the air and combining it with hydrogen. Hydrogen can be used ‘as is’ in many applications – but that’s not all hydrogen can do to shake up the energy markets.

In fact, Power-to-X can be used to produce fuels such as synthetic methane, methanol, ammonia, kerosene, gasoline and diesel. Let’s now have a quick look to find out, what they’re made of, what they’re good for – and what kinds of challenges might still be out there. Furthermore, we’ll discover how these fuels relate to hydrogen, which has many roles in fueling the future.

Green hydrogen to the rescue

The starting point is simple enough: The emerging hydrogen economy wants to use green hydrogen as a fuel for industry, power generation, heat, and transportation. It will also be utilised as a raw material for production of the before-mentioned future fuels for longer-term storage of energy.

In the future, then, renewable energy systems, hydrogen and other carbon-neutral synthetic fuels can replace, for example, gasoline as a transport fuel or natural gas as fuel for power generation.

Kaj Portin, General Manager, Sustainable Fuels & Decarbonisation, at Wärtsilä says that a hydrogen economy is very much the way of the future.

“Renewable energy sources, such as solar, hydro and wind power, will be utilised to whatever extent we can, and the excess electricity produced will be used to make green hydrogen and used as such, or, instead, turned into other fuels,” he lays out the game plan.

“The technology is there to make this massive change happen. Now it’s a matter of taking hydrogen to the industrial scale,” says Tommi Rintamäki, Senior Manager, Power-to-X, at Wärtsilä. 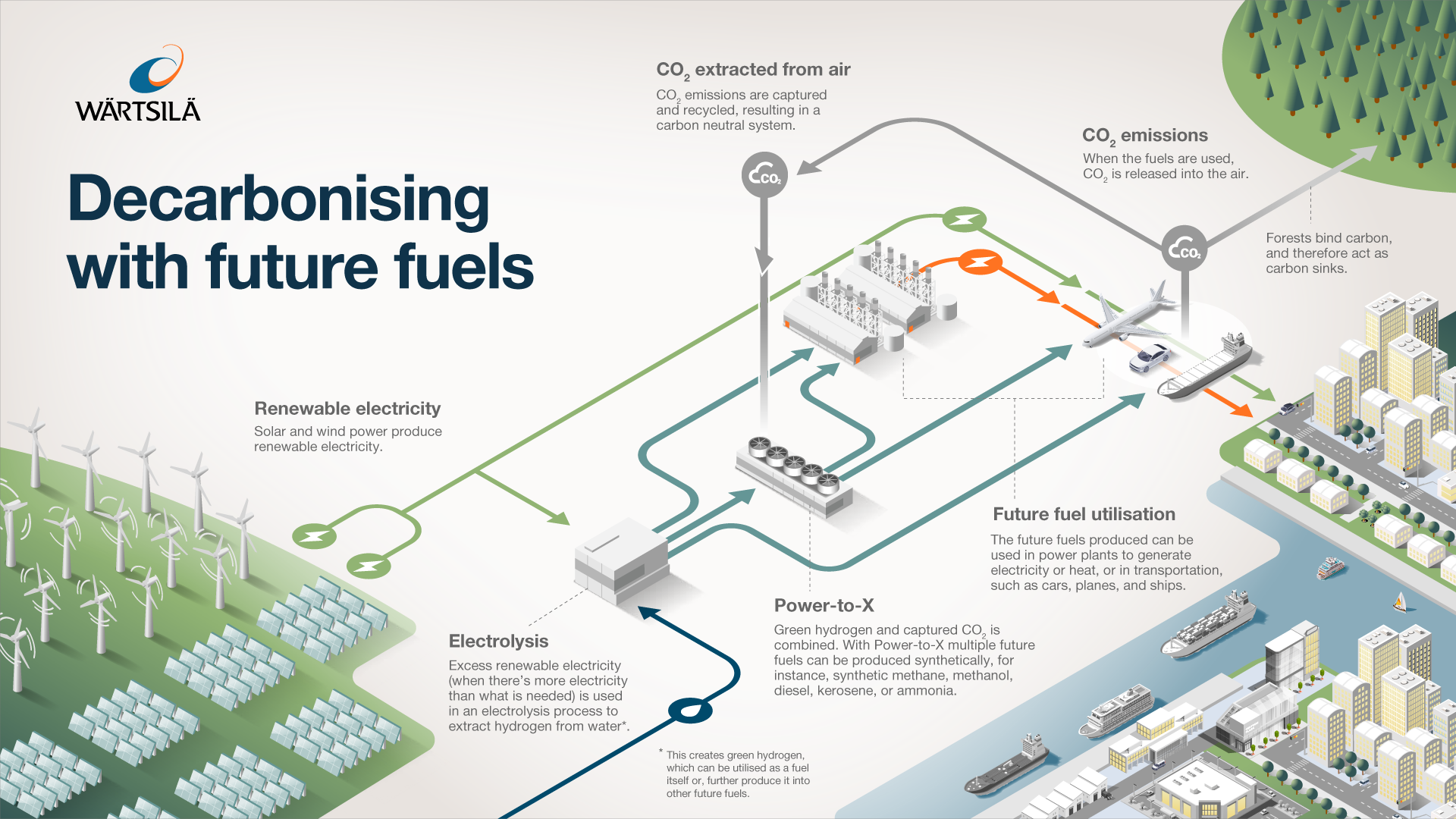 Presently, Wärtsilä is investigating several future fuels, including green hydrogen, synthetic methane, methanol and ammonia, with a view to providing complete flexibility across engines and the fuel chain.

Since internal combustion engines can be adapted to combust most fuels, dual-fuel (DF) or spark-ignited (SG) engines are already capable of combusting natural gas – fossil, biomass or synthetic – while diesel engines can run on liquid biofuels, biodiesel or e-diesel. Wärtsilä has extensive experience in converting engines to other fuels, including diesel to dual-fuel or spark-ignited.

According to Kaj Portin, Wärtsilä started looking into hydrogen already 20 years ago. “We had a project in 2001 which considered the use of surplus hydrogen to run engines,” Portin looks back.

“The real elevation in hydrogen has taken place during the last 3-5 years, as the idea has really gained popularity and new applications have emerged,” he says.

One milestone moment was experienced in 2014, as German power plants ran into a sudden problem: too much solar and wind power for them to handle. Instead of giving the surplus away for free or dumping it in some other way, an idea emerged: what if we convert it to hydrogen?

“Originally, the hydrogen was then added to natural gas pipelines,” Portin says, adding that the gas pipelines would feature only 5% of hydrogen at the time.

“However, you can add up to 25% of hydrogen into a natural gas pipeline – and it still works and is considered to be gas infrastructure, not hydrogen gas infra.” Likewise, Wärtsilä engines are able to combust hydrogen blends with up to 25% hydrogen.

Presently, the process of producing synthetic versions of methane, methanol, ammonia and Fisher-Tropsch products (such as gasoline, diesel, kerosine) are being developed towards industrial scale.

“For example, methane is widely used as fuel. Synthetic methane is a solid, easy choice for engines,” says Tommi Rintamäki.

From sea to air and beyond

Methanol, on the other hand, has been making waves, so to speak, in the marine industry. Methanol is not a gas, but a liquid – and easy to deploy as a result.

“Ships that use LNG can also use methanol, and it’s easy enough to store,” Portin says.

Moving on to synthetic gasoline, diesel and kerosine, Portin and Rintamäki point out that airlines, for instance, pretty much have to use kerosine at this point, so making synthetic kerosine is an attractive, emissions-reducing option.

“However, making these Fisher-Tropsch products is more complicated to pull off efficiently. Efficiency of methane and methanol production is a lot better,” Tommi Rintamäki says.

And, finally, there is ammonia which is a promising, carbon-free fuel that could boost shipping industries and, potentially, energy production, in the years and decades to come. Known as a fertiliser, synthetic ammonia is appealing since it features no CO₂ emissions at all.

“However, you could take all the ammonia produced in the world, and it would cover only about 4% of the shipping fuel needs,” Portin says, highlighting the point that ammonia can be one of the solutions of the greener future, but clearly in a more supportive role.

“The idea is to give ship owners different options of reaching zero emission targets,” says Portin.

According to Portin and Rintamäki, Wärtsilä is following the development of the green fuel market with a keen eye – while making innovations of its own.

“When you look at engines and sustainable fuels, there is simply a massive business opportunity there,” Rintamäki sums up.