On World Oceans Day, we explore some ways our seas can be respected while also providing for ‘life and livelihoods’.

On World Oceans Day, we explore some ways our seas can be respected while also providing for ‘life and livelihoods’.

Each year, World Oceans Day highlights a different aspect of the ocean’s essential contributions to the global community and the actions that everyone—from multinational corporations to individuals—can take to act as better stewards of the seas.

This year’s theme is ‘The Ocean: Life and Livelihoods,’ which highlights the ocean as a vital economic resource. The Organisation for Economic Co-operation and Development (OECD) estimates that over three billion people rely on the ocean for their livelihoods, however, ocean industries often fail to act in ways that will preserve the ocean for the long-term. The blue economy concept, which seeks to connect ocean stewardship to the ocean as an economic driver, is one way of balancing the needs of the environment and the economy.

Here are four ways the blue economy can help preserve and protect this vital resource.

Maintaining the ocean’s biodiversity through protected reserves is one aspect of the development of a blue economy. John Virdin, Director of the Ocean and Coastal Policy Program at Duke University’s Nicholas Institute for Environmental Policy Solutions, is heartened by the progress on ocean protection.

“In recent years, we’ve seen a big rise in the percentage of the ocean under some sort of formal protection, from two percent to over seven percent,” Virdin says.

He notes that this shows momentum for the 30x30 initiative, which seeks to safeguard at least 30 percent of the world’s ocean by 2030 through a network of highly protected marine areas.

In Virdin’s assessment, marine protected areas (MPAs) are “a bright spot where blue economy concepts and discourse are making progress towards agreed conservation goals.” However, he emphasises the importance of ensuring that MPAs do not come at the expense of social sustainability and equity.

“Governments should not be fencing off the ocean from traditional and small-scale users, or vulnerable populations, otherwise MPAs become ‘ocean-grabbing,” he cautions.

Fishing continues to be among the most important industries in the ocean economy, and demand is increasing all the time. With a yearly growth rate of 3%, the consumption of fish significantly outpaces that of meat, which is growing at a rate of a little over 1%. The growing popularity of fish products offers both challenges and opportunities. Overfishing threatens fishermen’s long-term livelihoods, but sustainable fishing practices are expanding, and they can offer environmentally responsible economic growth to coastal communities dependent on the sea as a resource.

Kate Moran, President and CEO of Ocean Networks Canada, says: “A lot of people around the world eat fish and other marine foods for protein, and we haven’t expanded our aquaculture in ways that can produce enough food. That’s an area where this can be done sustainably, particularly if you have aquaculture sites that are multi-trophic, so you have different species together that complement each other and can keep the environment self-sustaining.”

Moran adds that in British Columbia, there is keen interest in ensuring indigenous coastal communities’ ownership and management of sustainable fisheries. She says this practice provides “an economic path forward, provides food, and keeps the coastal environment in good shape.” 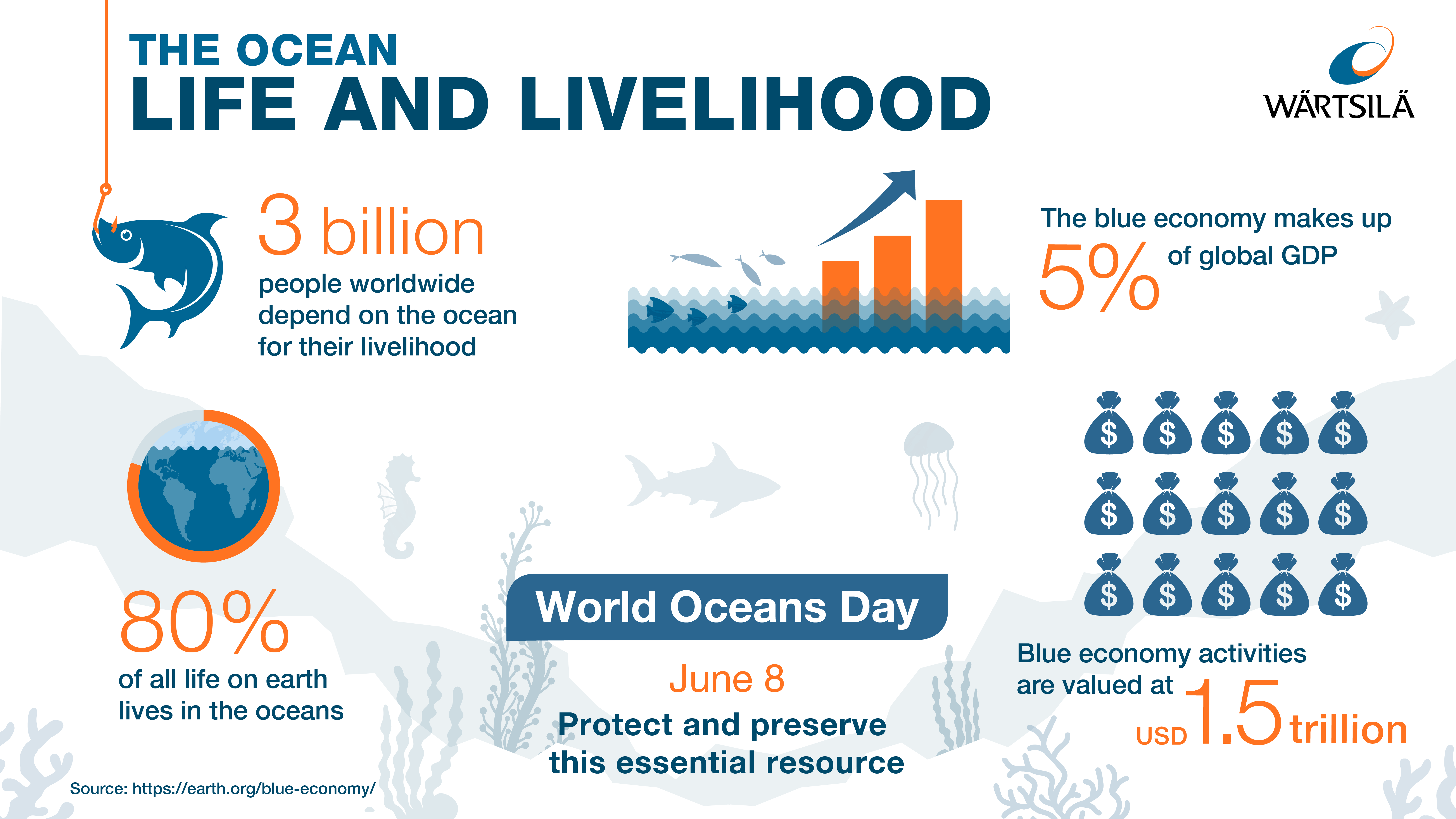 Both Virdin and Moran are optimistic about efforts to reduce the impact of the shipping industry on the ocean. In Canada, Moran cites a Port of Vancouver-led effort for monitoring and mitigating ocean noise, which can also be used by industry to implement early detection of propulsion problems. This, benefits both shippers and the ocean by allowing system problems to be fixed earlier, improving fuel efficiency, and reducing noise from equipment issues.

Virdin is hopeful about progress in numerous areas, including decarbonising shipping, where he sees “momentum driven by a better understanding of the shipping sector’s contribution to emissions and willingness by regulators and the industry to pursue emissions reduction.”

He also highlights the emergence of ‘bluetech’. These innovative technologies and solutions “not only do no harm in the ocean, but actually restore, conserve, and help address sustainability problems in the ocean,” Virdin says.

Creating new financial instruments or financial structures to invest in the oceans is a topic of interest among many governmental and non-profit organisations. According to Virdin, however, blue bonds—which The Nature Conservancy champions as a way to support island and coastal nations’ economics and conserve 15 percent more of the ocean in the next five years—have gained limited traction.

“I got really excited about blue bonds a few years ago, and it hasn’t gone mainstream,” he says, “It’s still boutique and niche. The Seychelles blue bond was a demonstration project, but to my knowledge, there haven’t been more. It remains to be seen if investors are willing to trade returns for social impact.”

There is still possibility for growth in this field. In The Ocean Finance Handbook, Friends of Ocean Action notes that numerous investment types, including endowment funds, impact funds, venture capital, and project bonds, have been successfully leveraged to support sustainable ocean projects worldwide.