Flexible energy solutions clear the way for renewables in the UK

Flexibility is key in making the move to renewable energy sources. In the UK, which has traditionally been heavily dependent on fossil fuels, Wärtsilä’s solutions help boost the transition to a greener future.

Half-time of a football match between the two top teams in the Premier League, or a commercial break during the season finale of Coronation Street. Those who’ve stayed put in front of their tellies return to their earthly needs: getting a snack, switching on the kettle to enjoy their afternoon cuppa, or flushing the loo.

This is known as ‘TV pickup’ in the UK: a large number of people glued to the same TV show taking advantage of the breaks to operate all kinds of electrical gadgets and use toilets. However, it’s not the only event that puts extra pressure on electricity networks. Sudden surges and mass switch-offs happen for other reasons as well, all of which the electricity and gas transmission system needs to be prepared for.

“It’s impossible to precisely forecast the demand for electricity at all times, and that’s why flexibility is of utmost importance,” says Jan Andersson, Market Development Analyst at Wärtsilä.

“The networks need sources that can be ramped up quickly which is not possible with nuclear or coal.”

This is particularly the case with fluctuating renewable energy, such as wind and solar power. There might not be enough wind or sunshine to meet the need during peak hours, or renewable energy production has to be limited due to lack of flexibility if the energy is not stored effectively. There can also be weather forecast errors or delays in expected weather conditions.

Centrica backs up wind and solar

One way to balance the grid during peak times is to have power sources that can be switched on rapidly to ensure that the country doesn’t shut down. Wärtsilä has been involved in a project by energy and services company Centrica, which has two 50 MW power plants based on five Wärtsilä 34SG engines, running on natural gas. Wärtsilä has the overall role in the project, covering engine supply as well as plant engineering, procurement, and construction.

The plants, located in Brigg in North East Lincolnshire and Peterborough in Cambridgeshire, can provide electricity for about 100,000 households in less than two minutes after they’ve been switched on. Upon completion, the plants will be the biggest medium-speed, engine-based gas power plants in the UK, bringing Wärtsilä’s installed capacity in the country to over 250 MW.

“This way, we can support surges in electricity demand or fill the gap when solar or wind power is unavailable, stabilising the grid whenever needed,” says Bent Iversen, Senior Business Development Manager at Wärtsilä.

“As we’re going to have more and more renewable and distributed energy, we must have sources of flexibility on the system to be able to control the frequency,” he notes. “The under two-minute start-up time is a rare feature and very important to the UK grid.” 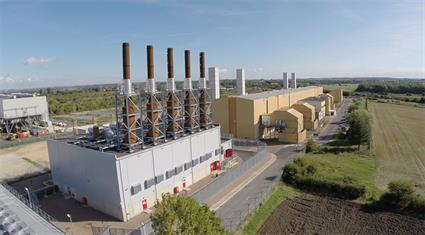 The 50 MW Wärtsilä-built plant in Brigg (above, in front) will balance the stability of the grid. Together with the 50MW Peterborough plant they will generate enough electricity to supply 100,000 homes.

Britain’s heavy reliance on coal stems from its industrial past. The country’s coal production increased remarkably throughout the Industrial Revolution to feed, for example, steam engines.

“Just a few years ago, the dominant fuels in the UK were coal, gas and nuclear,” Iversen says. “However, as many of the coal plants are pretty old, they can’t comply with new emission regulations anymore. In addition to the emission issue, the coal plants also have financial difficulties with low capacity fees.”

By capacity fees, he refers to the government’s Electricity Market reform package. In 2014, the UK government introduced the Capacity Market, which aims to ensure a secure electricity supply by paying energy companies for reliable sources of capacity on top of electricity revenues.

For the government, the annual auction is a way to encourage the investments needed to replace old power stations as well as modernise the existing ones to ensure sufficient and reliable capacity that can back up intermittent renewables. In short, the government wants to provide the nation with reliable energy at an affordable price. If this governmental scheme incentivises the need for flexibility in the grid remains to be seen.

Flexibility brings down the bill

However, the competition can get fierce. Power companies look at day-ahead markets, intraday markets, and ancillary service markets in calculating their bids – and the ones that are not cleared in the auction will be automatically dropped out.

According to Andersson, the high interconnector capacity in the latest auction was one of the main reasons for the low clearing price, and what happens in the next auction depends on the number of interconnectors that enter the auction. Whatever the end result is, the need for flexibility isn’t going away; the government has committed to increasing the share of renewables in the grid, not least because of the Paris Climate Agreement

The steps towards more sustainable alternatives have been significant: last year, the UK saw the greenest year in its history in terms of energy generation. The government also aims to shut down all of its remaining coal power stations by 2025. Andersson points out, though, that if the auction prices remain low, the Capacity Market might force the plants to be decommissioned even sooner.

Andersson says that the country will simultaneously increase its gas capacity to supplement the remaining nuclear and coal plants when renewable generation is low.

“The focus is on renewables, but gas will be used to bring needed flexibility to the system,” he explains.

Flexibility also helps avoid peaks in electricity prices, which is good news for end users. As there should always be sufficient energy at hand, the price won’t jump as high as it would without flexible resources being fed to the grid when the demand goes up.

Despite big developments in the renewables sector, both Iversen and Andersson believe that the UK will remain dependent on fossil fuels for quite some time. The best way to speed up the transition is boosting flexibility in power systems and energy storage opportunities. The UK has also increasingly begun to utilise demand response, meaning that consumers are encouraged to reduce or shift their energy usage during peak hours with financial incentives.

“Demand response is definitely a growing trend,” says Andersson. “As more and more people get involved, the effect it has on energy consumption patterns will be much more noticeable, too.”

Another point Andersson makes is that as the energy efficiency of the UK’s housing improves, heating buildings and homes will no longer eat up as much energy reserves.

“Attempting to reduce the carbon footprint of housing with efficient solutions has been trending in other markets as well, so it’s likely that the UK will follow suit.”

Iversen sees that the developments in energy storage technology will provide new means to respond to sudden surges in electricity demand or failures in ongoing production.

“Energy storage technologies and advanced energy management software will become an inevitable part of the power system in shifting and optimising energy within the day. For years to come, there will also be a need for gas-powered plants and other flexible generation to ensure power system reliability when renewable energy is not available.”