Take a peek under the hood of the market-beating Wärtsilä 46TS-DF engine with a look at five innovations that slash ship operating costs and emissions.

What makes this market-beating engine so efficient? What innovations help it slash operational costs and emissions? Let’s take a peek under the hood of the Wärtsilä 46TS-DF to discover what makes it tick so many boxes.

Decarbonisation means cutting greenhouse gas emissions, and the two most effective ways to achieve this are to reduce fuel consumption and to use low-carbon fuels.  The Wärtsilä 46TS-DF is bursting with innovations that support decarbonisation and deliver many more benefits besides.

Here are five innovations in Wärtsilä 46TS-DF that help save fuel and cut emissions:

The Wärtsilä 46TS-DF has a fully electronic fuel injection system, controlled cylinder by cylinder. This means that, from start-up to shut-down, diesel operations are smoke-free. It’s also highly efficient at partial loads and smoke-free at heavy loads.

The timing of the valves in a reciprocating engine has a huge impact on performance, but engines have different air intake needs at different loads. This is why the Wärtsilä 46TS-DF has Variable Inlet Valve Closing (VIC), which can change the timing based on the load. Performance is further optimised with a variable exhaust valve. Both innovations help to reduce the vessel’s fuel consumption and, of course, emissions.

Even the most innovative engine in the world won’t perform as expected without proper automation control. The Wärtsilä 46TS-DF uses Wärtsilä’s automation system, which monitors and optimises every cylinder cycle in real time to get the best out of the engine.

Another important way the Wärtsilä 46TS-DF promotes decarbonisation is its modular design, which means every part of the engine is a module that can be replaced as needed. This approach also makes it more cost-effective and straightforward to upgrade to run on carbon-neutral fuels like green methanol in the future. 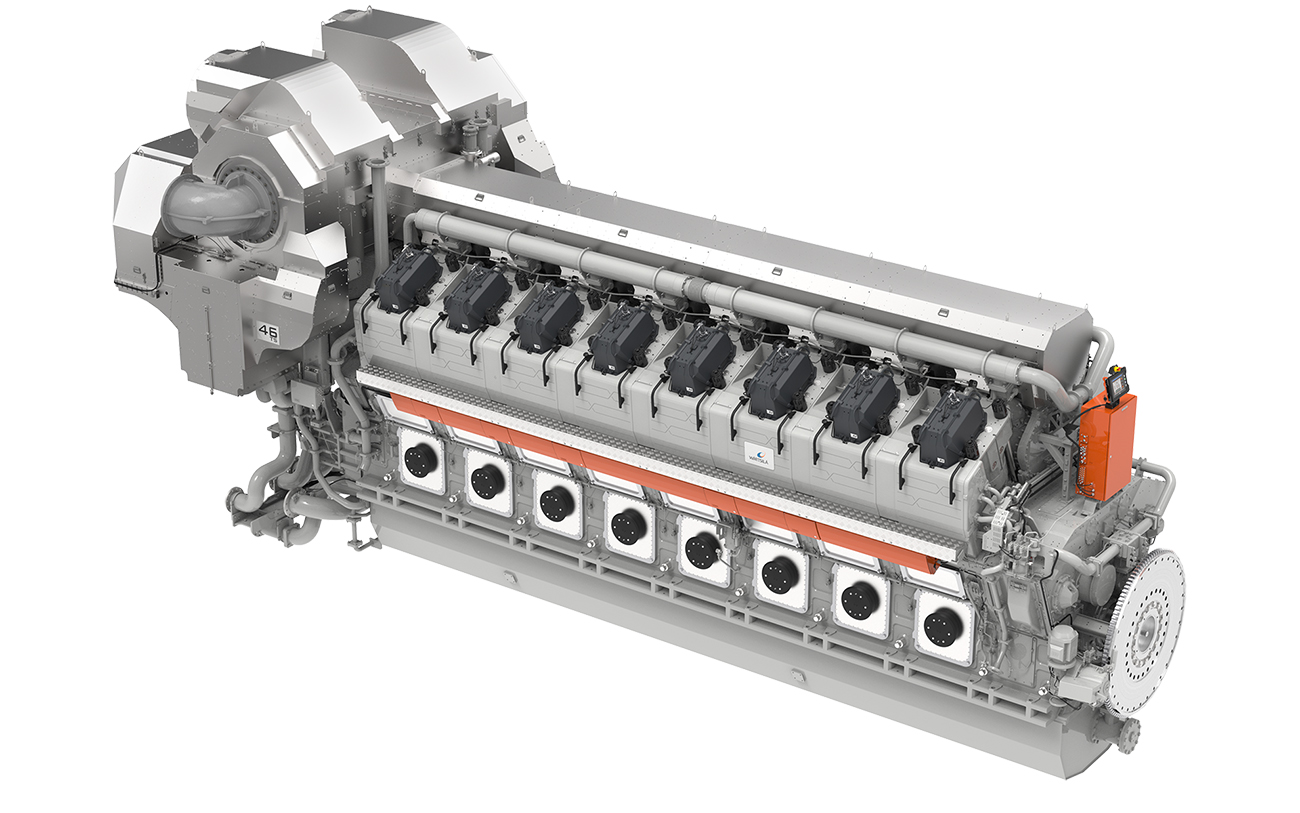 What does it take to build the most efficient engine possible?

“Our target was to raise the bar in terms of performance in order to help our customers achieve the highest possible efficiency and the lowest operational costs and emissions,” says Federico Bottos, Product Manager, Large Bore Marine Engines at Wärtsilä. “This meant completely redesigning the engine to introduce new technology and create a modular design.”

The design process began in 2016, and by 2017 the first demo engine was in the lab with new technologies integrated to boost performance and reduce emissions. In 2019 the first test engine was ready, and soon after two more test engines were added, allowing the team to really finetune the performance. “This approach means we can guarantee a reliable and proven engine from the beginning,” says Bottos.

The first customer to take delivery of a Wärtsilä 46TS-DF is US cruise company Royal Caribbean Cruises. The engine will be installed onboard its new vessel, Utopia of the Seas.

The Wärtsilä 46TS-DF is an engine that’s far greater than the sum of its parts. Its innovations work together to create an engine with high power and low emissions in a compact design, perfect for cruise ships and ferries, as well as other applications like gas carriers and merchant vessels. “The Wärtsilä 46TS-DF can reach 52% efficiency, which is the highest on the market for an engine of this size,” says Bottos. “This is the best solution out there for guaranteeing both low greenhouse gas emissions and low local emissions.”

The Wärtsilä 46TS-DF can reach 52% efficiency – the highest on the market for an engine of this size.

Game-changing features like the five mentioned in this article will be used more widely on Wärtsilä engines in the future and can already be seen on the Wärtsilä 25 and the Wärtsilä 31.