Finding inspiration in innovation for more than four decades

How does someone who has curiosity in his DNA work for the same company for more than 40 years? According to Teus van Beek, it’s through constantly finding new sources of inspiration

How does someone who has curiosity in his DNA work for the same company for more than 40 years? According to Teus van Beek, it’s through constantly finding new sources of inspiration.

Teus van Beek, General Manager, Ecosystem Innovation, Wärtsilä Marine Systems, isn’t one to sit still for long; he has restless energy driven by curiosity. One of his defining traits is a constant desire to learn something new. So, it’s surprising that he’s spent more than 40 years at a single company.

“I was always challenged,” Teus says. “Even though some things in my work have been constant – working with customers, working with technology – the environment kept changing. I was inspired by new things and looked for places where I could add value.”

Teus began his career at Lips Propellers, a local Dutch propulsion company in 1980. When the company was acquired by Wärtsilä in 2002, Teus says he had to make a choice as to which direction he wanted his career to go. He had been managing a large group, but decided he would rather focus on innovation than management.

“I was inspired by the technology, and I worked on the development side, which inspired me more than the purely processes side of management. I also like to work with people, and I like to work in a team,” Teus says.

This willingness to share ideas and experience as part of a team is one of the things that makes Teus a great role model, says Tamara de Gruyter, who has been a colleague of his since 1996.

“He’s very much a collaborator, bringing people together, building bridges, seeing people with potential in the organization and thinking ‘how can I get them on board,” says Tamara.

He’s very much a collaborator, bringing people together, building bridges, seeing people with potential in the organization and thinking ‘how can I get them on board‘

Working in an ecosystem

That ability to bring people along has been critical to Teus’s success on a number of projects, including his latest: ZESpacks. Three years ago, the brewer Heineken began looking for ways to implement zero-emissions shipping on the barges it uses to ship beer from the brewery to the Port of Rotterdam. Wärtsilä joined together with energy company ENGIE, the Port of Rotterdam and ING bank to create a new startup to provide a solution – rechargeable battery containers for shipping.

“I had to use all my experience on this project – from managing big developments to creating new technologies to collaborating with outside partners – because we are doing so many things at the same time in this project,” Teus says.

Creating the container itself and developing the technology inside it was only part of the challenge. The group also had to prepare the ships to run on the containers and train operators to manage them. Additionally, they had to develop docking stations where the batteries can be exchanged and recharged.

The team is planning to deploy the ZESpacks for inland waterway shipping in the Netherlands this summer, but Teus says this is only the beginning.

“This is the start of something we think can become big. We have the ambition to grow the number of ships in the future who want to use this technology. Fortunately, it’s supported by the government and we have a big company like Heineken that is pushing ship operators towards this. Here you really see the ecosystem working,” says Teus.

“Ecosystem work means that you have to collaborate with partners in a different way than before. It used to be that there was an agreement between a supplier and purchaser. An ecosystem is a partnership where we are working together towards the same goal.”

Even while working as part of a team, Teus stands out as a leader and teacher.

Henk de Jong, who has worked with Teus for nearly 30 years, says that he is always willing to try something new.

He’s the only engineer I know who allows so much risk-taking. Normally an engineer wants to be secure that what he is proposing will work, but Teus allows failure as well. He knows that not everything will go smoothly and that there will be setbacks, but you can find your way out. You test and learn, and eventually, it works

That’s a message Teus communicates to the younger Wärtsilans on his teams as well as the students he interacts with through an innovation program he helps organize at his alma mater, Delft University. As part of the course, he gives the students four or five real-life challenges to try and solve, such as creating a new business model to encourage companies to take up energy saving devices. 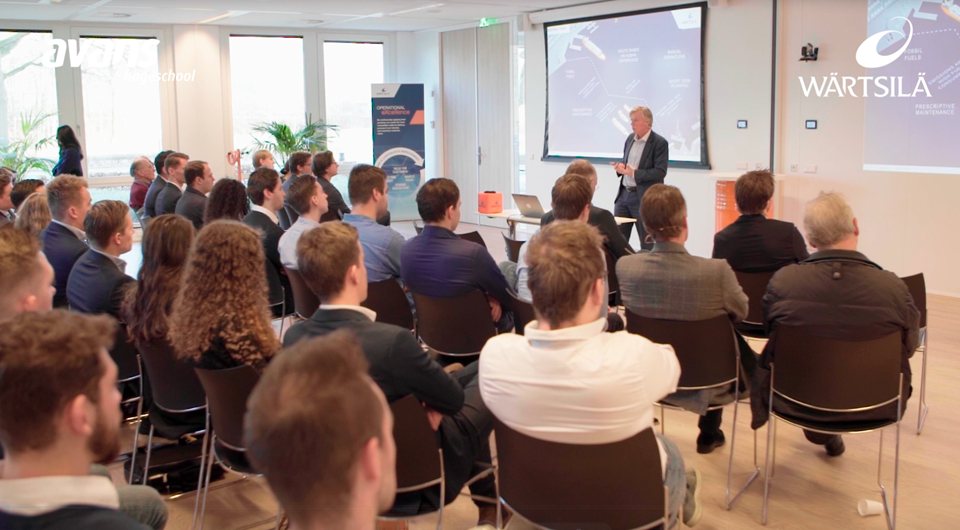 Teus says he finds the students inspiring, but Henk says that the inspiration flows both ways.

“Teus inspires young people to reach their goals by sharing his experience,” says Henk. “I learned from him that if you have a passion for what you do, you can move mountains.”

Teus is constantly looking for ways to make opportunities out of challenges, and he found one even while working remotely during the Covid-19 pandemic.

Typically, account managers act as a liaison to the customer and then bring back messages to the engineers and product developers, but when meetings with customers shifted online, it became possible to invite the people who know the technology into the discussion.

“We have an opportunity now to collaborate much more with our customers and to really use that to find new ways to drive the business. This is probably the only positive thing from Covid, but this way of working will allow our internal people to be connected to the customer in a much more thorough way than before,” Teus says.

Teus tends to approach any situation as a problem to be solved, and this desire to find solutions is part of what keeps him motivated.

There's a saying about innovation. If you can keep up with what's going on, then you're not moving fast enough

Teus van Beek isn’t done trying to keep ahead of the next big thing.