Company
Home
Insights
Faster, easier, and safer together with robots

Faster, easier, and safer together with robots

In a recent one-month pilot Wärtsilä ran with logistics company DHL, four small freight robots carried plastic bins and carton boxes in Wärtsilä’s Central Distribution Centre (CDC) in Kampen, the Netherlands. The outcome was so positive that the robots are here to stay!

In a recent one-month pilot Wärtsilä ran with logistics company DHL, four small freight robots carried plastic bins and carton boxes in Wärtsilä’s Central Distribution Centre (CDC) in Kampen, the Netherlands. The outcome was so positive that the robots are here to stay!

The warehouse staff normally carry the boxes themselves or use a pallet truck, but now they placed them on the robot shelves and pushed a button on the robot’s touchscreen. The material transport robots then set off on their pre-defined route to their destination in the CDC. Here, DHL operates some of the warehouse activities, like goods reception, picking, and packing.

The floor space of the distribution centre in Kampen, a small Dutch town 90 kilometres northeast of Amsterdam, is 37,000 square metres, and it stocks over 80,000 unique parts, with some 27 million different pieces. In 2016, over 100,000 deliveries were shipped from this CDC to more than 180 different countries. On an average, this means 35 trucks departed each day.

Even though the storages are already fully automated, there are still quite a high number of manual boxes and pallet movements between the various work stations. This is why further automation seemed a logical step in the CDC. Innovation and robotics are essential for Wärtsilä, and are one of the key points in the partnership with DHL.

Teija Tikkala, Manager of IT Service Management in Wärtsilä Global Logistics Services, Parts Delivery, says now is the right time to start using robotics. “It’s no longer a massive investment. The costs are getting more realistic and implementation is easy. There is also more technology related to smart autonomous machines available and the developments go fast.”

The aim of the pilot was to explore the options of using the latest technology innovations in the warehouse’s daily operations, she explains. “Wärtsilä and DHL also wanted greater insight into the added value of robotics in a storage environment and into the interaction between robots and employees.”

Fetch Robotics, a California-based company, provided the hmishelf25-type robots. These small models have a loading capacity of 75 kilograms and can cover a distance of two metres per second. The robots navigate using a 270-degree laser scanner combined with a 3D camera. For visualisation, the robot projects a blue light two metres in front of the robot.

Early involvement of the staff is important, Tikkala emphasises. People had a lot of questions and also concerns about the robots and how robots would impact their daily work. “They also had a lot of great ideas how we should utilise the robots in the warehouse. So we arranged an idea contest and then selected the pilot use cases from those ideas.”

The use of robots results in more rewarding responsibilities and tasks, she explains. The robots relieve the warehouse operators from physically strenuous work and, based on pilot findings, more than 30 kilometres of walking in the warehouse in Kampen each day.

“Carrying boxes from A to B is not a really valuable task. Instead, employees can concentrate on other jobs,” Tikkala says. She adds: “Some of the warehouse operators will become a ‘robot key user’ and also configure new tasks for the robots.” 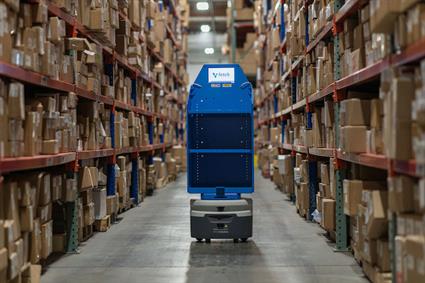 All in all, Tikkala believes, most employees were pleased with the robots. “People like how easy it is to use them.” There was no need for complicated programming, for example. Also, only minimal warehouse changes were needed: floor striping to mark the robot’s parking and charging spots.

The pilot is regarded as a success for a number of other reasons too, she explains. The stock availability has increased, having more continuous material flow has reduced some buffers, and thus efficiency and productivity have improved. “And of course we are proud to be part of this kind of new innovations and the positive publicity this has brought to Wärtsilä.”

The company has now decided to purchase three robots to support the operation within the CDC in Kampen. There are no plans yet to use them in other locations, but Tikkala thinks this is likely in the future.

Naturally, a few lessons were learned during the pilot and some things will be done differently next time. “One of the challenges was the blind spot in our Wi-Fi network, which made the robots stop or return to the docking station,” recalls Tikkala. An efficient set-up and operation requires a Wi-Fi connection with sufficient range.

The robots are intelligent. They recognise their locations and surroundings, and can differentiate between dynamic and static obstacles, enabling evasive action for working safely with and around people. Apparently it is even safer to work with robots than without them. “Robots have built-in sensors that recognise movements, which the pallet trucks don’t have,” Tikkala says. 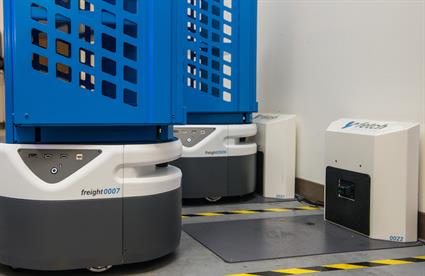 Initially the robots had some difficulties seeing certain objects, like the reflective stripes on the DHL global standard safety jackets. “The 3D camera got confused by the highly reflective vests and saw ‘speeding ghosts’. The result was that the robot had difficulties to navigate through what looked like an empty space for us.”

During the grand opening of the pilot, with dozens of visitors wearing a reflective safety vest, the robots suddenly became disoriented. An hour later the cause was found. “The software has been adjusted, and the robots recognise the vests now,” Tikkala smiles.

On another occasion, two robots faced each other on their way to the charging unit to reload. When the nine-hour battery life ends, the robots independently make their way there. “They were programmed to avoid contact and started a sort of dance around each other,” says Tikkala. “It looked quite funny.”

She adds: “This can of course happen, if robots are used for the same task or running on the same path, so you can program them to know who goes first.”

Over the coming months, the trial will continue in Kampen to further improve productivity, quality, and safety. “For the first pilot we selected fairly simple tasks and routes,” says Tikkala. “Now we can extend the route, and add more complex itineraries.”

There are also plans to experiment with other robot types and technologies. “We’re thinking of investigating larger robots like the freight500, for instance, which can carry more and heavier parts.”

Wärtsilä plans to start a pilot with drones, which could be equipped with a camera to calculate stock and gather other information.

“Like we did in this first pilot, we will also gather the ideas for using drones from our personnel. People have a lot of good ideas,” says Tikkala enthusiastically.