Private sector participation through the Build-Own-Operate-Transfer (BOOT) model may hold the key to supporting the expansion of the small-scale liquefied natural gas (LNG) market. Although small-scale LNG could help solve many of the energy challenges of developing countries and remote, off-the-grid locations, the lack of financing and infrastructure remains an obstacle to its more widespread acceptance.

Private sector participation through the Build-Own-Operate-Transfer (BOOT) model may hold the key to supporting the expansion of the small-scale liquefied natural gas (LNG) market. Although small-scale LNG could help solve many of the energy challenges of developing countries and remote, off-the-grid locations, the lack of financing and infrastructure remains an obstacle to its more widespread acceptance.

There is currently an abundance of LNG available for large-scale applications, with new LNG supplies coming from Australia, and increasingly also from the United States. With the supply base growing, leading market players, such as international oil majors and state-owned oil companies, are expressing a growing interest in making LNG available for small-scale applications, as well.

The primary drivers for the growth of small-scale LNG market will be its use as shipping fuel, driven by the upcoming IMO 2020 regulations, which will limit the sulphur in fuel oil used in ships to 0.50% m/m (mass by mass) from 1 January 2020; and its use as a less expensive, more sustainable alternative to diesel for power generation in remote and island locations. Although the industry is aware that LNG has the potential to be more cost competitive than other alternatives, the high up-front costs related to establishing a small-scale LNG supply chain are still causing doubts.

A number of recent market developments support the growth of the small-scale LNG market. In South-East Asia, both the Singapore LNG and Tangguh Train 3 terminals will soon be able to load small-scale LNG carriers, thereby expanding the options for small-scale LNG sourcing. Meanwhile, the global LNG carrier fleet is gradually growing. There are currently some 25 small-scale LNG vessels with capacities of less than 40,000 cubic metres in operation, with eight more expected to be commissioned in the next two years.

Despite these developments, the small-scale LNG market needs to solve three challenges for its potential to be realised.

The first challenge is the high up-front capital cost of establishing a small-scale LNG supply chain, resulting in increased perceived project risks. At the present time, there is a distinct lack of both small-scale LNG terminals and a dedicated small-scale LNG carrier fleet, with few players willing to invest in both terminals and vessels to support a relatively small LNG delivery volume.

Secondly, while demand for small-scale LNG is driven by power generation, power utilities often lack the necessary expertise and resources – including labour, know-how and capital – to develop and implement LNG projects.

The third major obstacle in the expansion of small-scale LNG is the need to adapt the methodologies used for large-scale projects to the small-scale context. The methods that exist at present are often too complex and costly to be viable for small-scale plants. However, by developing new processes that are leaner and less expensive, but still safe, the small-scale LNG market has the potential to be profitable for various applications. 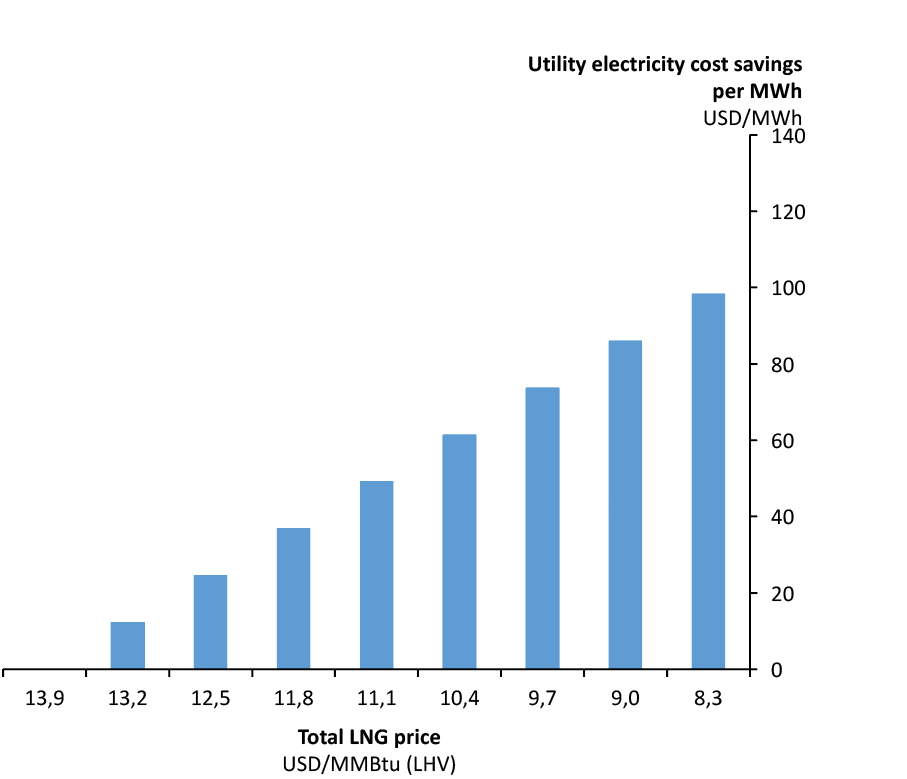 The diagram above shows the electricity tariff reduction in USD/MWh for a power plant at different prices of LNG, in comparison to the diesel price. The break-even point for small-scale LNG feasibility depends on the delivered price of diesel and the price of LNG. As an example, if the delivered price of diesel is 520 USD/tonne, the price of delivered LNG should be below 13.9 USD/MMBTu for generation with LNG to be feasible. If the base price of LNG was around 6 USD/MMBTu, the all-in price of break-bulk transportation, storage and regasification should not exceed 7.9 USD/MMBTu to achieve savings in comparison to use of diesel.

The power of BOOT

A potential solution to the first and second challenges is a funding model known as BOOT (Build-Own-Operate-Transfer).

It is a form of project financing in which a private or, more often, public-sector player, such as a government agency or government-owned utility, awards a contract to a private organisation to develop, finance, construct, own, and operate an infrastructure project during a defined concession period. The fees collected during the operational period generate a return on investment for the concession holder. At the end of the concession period, the project is handed back to the concession counterparty. The BOOT model has been used since the late 1980s to finance large infrastructure projects such as toll roads, railways and power plants.

The advantage for the public sector player is that, by awarding the concession to a private company, it can attract private-sector funds for projects, allowing the public budget to be prioritised for other projects. Moreover, it can attract technical, project management, and operational and maintenance expertise from the private sector in areas where its own know-how may be lacking. For the private company, the contract length is designed to ensure that investment costs can be recovered and a profit can be made. 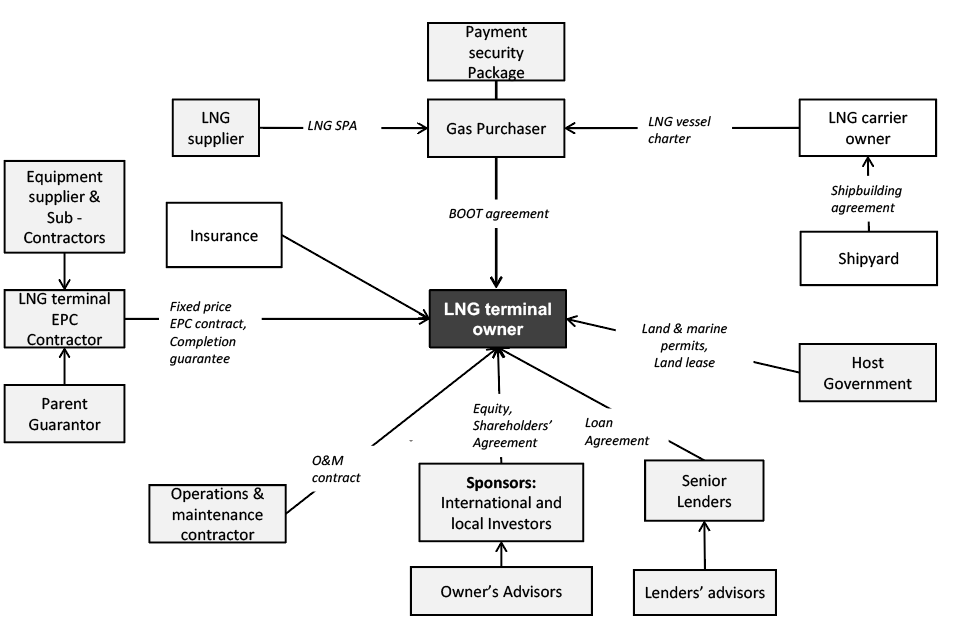 The diagram above presents a typical business structure with BOOT model, including project key agreements and counterparties. Successful project financing with BOOT model is based on a solid contractual structure and proper allocation of risks between the project parties.

As a total LNG-solution provider, Wärtsilä has the advantage of being able to deliver the complete project scope: from development and investment, to supplying the EPC for the small-scale LNG terminal, and to ownership, operation and maintenance. In addition, through Wärtsilä’s expertise in LNG carrier design, interface to LNG terminals can be optimised. Last but not the least, Wärtsilä has the capacity to bring all these aspects together to create a total solution that is optimised from the point of view of cost, efficiency and feasibility.