Ship owners have long known that this change was coming. International Marine Organisation (IMO) regulations limiting the emissions of Sulphur oxides (SOx) and other pollutants have been in the works for decades. It was only in late 2016, however, that the date for the final and most dramatic reduction in SOx emission allowances was confirmed. In specially-protected SECA areas, those levels had already been reduced ten-fold, but as of January 1, 2020 they will be reduced seven-fold, worldwide.

As sulphur-laden heavy fuel oil (HFO) is still the industry favourite, ship owners who haven't already done so will now have to switch to using higher-priced, low-sulphur fuel alternatives or invest in exhaust gas cleaning systems.

The shift of course means busier times ahead for the Exhaust Gas Cleaning division of Wärtsilä Marine Solutions. The division has already seen a marked uptick in demand for Wärtsilä exhaust gas cleaning systems since the 2020 deadline was finalised.

“Last year, Wärtsilä saw orders for 77 scrubbers. The majority came in the second half of the year, so we expect to have significantly higher numbers this year,” says Jan Othman, Director, Exhaust Treatment. “In the first two months of 2018, contracting has continued to be very active and the market sentiment has clearly further improved.”

Othman explains that while demand volume in the new-build market took off in early 2017, the retrofit market has been lagging behind and is only now revving up. And it is the retrofits that will generate the bulk of the demand peak associated with the regulatory change. When that peak comes, Othman predicts, there is a risk that demand will outstrip supply and ship owners might struggle to find yard slots for docking their vessels.

“I would expect that, once we get close to 2020, a lot of the smaller players will start to wake up and want short delivery times, which may cause price escalation,” he says. 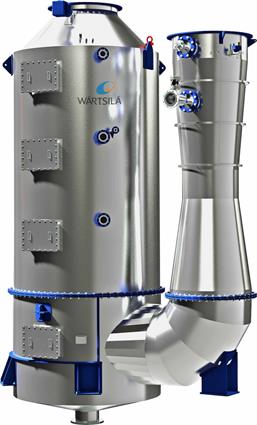 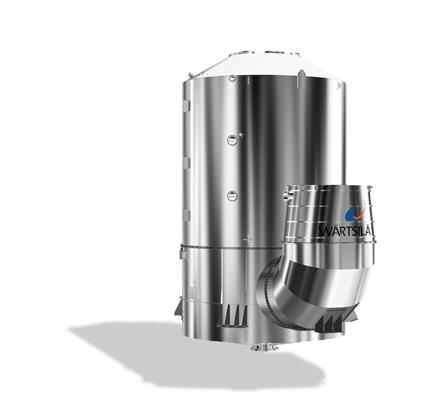 Faced with this unique market situation, Wärtsilä has been taking steps to boost its supply capacity.

The supply capacity Wärtsilä will achieve is hard to express in numbers, Othman says, because there's so much variance in exhaust gas cleaning system size and complexity. “It depends if it's a simple open-loop system for a tanker or a complicated hybrid system for a cruise ship. There can be a difference of thousands of engineering hours, per project. If we're talking only simple open-loop systems, our capacity is for hundreds of systems per year,” he says.

Even after the coming surge in demand abates, the market for exhaust gas cleaning systems is likely to remain healthy for years to come. A look at the available fuel options, and pros and cons of each, will shed light as to why.

HFO is currently the cheapest marine fuel, hence its popularity. It doesn't make sense for all ships, however, as it requires a sizable investment in exhaust gas cleaning systems. Converting to low-sulphur marine gas oil (MGO) is an easy, relatively inexpensive process, but the fuel itself is far more expensive. And while liquefied natural gas (LNG), a relatively new solution, is becoming more competitive in price, logistics challenges related to supply and handling, complicate the picture.

In terms of overall environmental impact, the HFO-exhaust gas cleaning system combination is hard to beat. Whereas MGO and LNG both require production and processing that creates emissions on shore, HFO, also known as residual fuel, is essentially a by-product. It's the waste left over after refineries remove gasoline and other distillate fuel oils from petroleum.

“From an overall environmental perspective, it makes sense to continue to burn HFO in marine applications,” Othman says. “There's a lot of energy left in the fuel. If one looks at the alternatives, it makes sense to stick with HFO, then apply abatement technology to reduce the impact.” 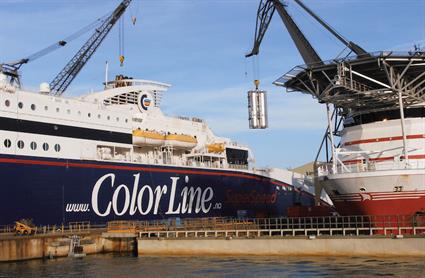 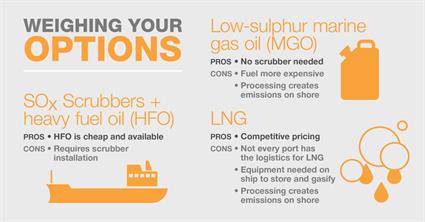