Ensuring the future of shipping is in green hands

As scientists and industry leaders race to develop viable zero-emissions solutions for shipping, a group of Norwegian teenagers took on the challenge and won the chance to present their zero-carbon emission concept at a Wärtsilä-inspired innovation event attended by the biggest names in sustainable thinking.

As scientists and industry leaders race to develop viable zero-emissions solutions for shipping, a group of Norwegian teenagers took on the challenge and won the chance to present their zero-carbon emission concept at a Wärtsilä-inspired innovation event attended by the biggest names in sustainable thinking.

Ninth-graders Sindre, Erika-Kristin, Lars, Haakon and Emilie travelled to Oslo to present their idea to the giants of the shipping industry at Future Innovation Day – Horizons, a day-long event hosted by Wärtsilä ahead of the bi-annual Nor-Shipping gathering.

The team’s proposal centred around a ‘Submarine String’, which features an underwater hybrid monorail/submarine vehicle powered entirely by electricity garnered from ocean renewables that can be charged at offshore stations. The hydrodynamic, battery-powered shuttle travels at speed underwater along a cable ‘loop’ supported by pylons fixed to the seabed. Intended initially to carry both passengers and freight between Norway and the UK, the team also suggested it could be a first step into the uncharted waters of point-to-point ocean tourism.

Describing the origins of their idea, Erika-Kristin said: “We understood the problem, but of course at the beginning it was a case of what will we do and will we even be able to do it?” 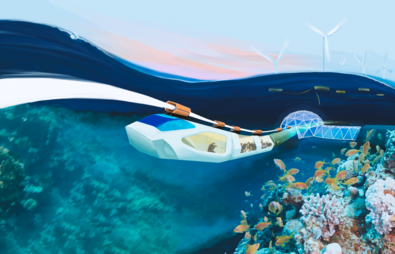 The team's 'Submarine string' which features an underwater hybrid monorail/submarine vehicle powered entirely by electricity garnered from ocean renewables that can be charged at offshore stations.

The team were happy with how the presentation turned out. “It went well, and I think we've all done a very good job,” she said. “We've had a great time here, so it's been fun.”

The enthusiastic applause following the pitch was richly deserved, according to conference moderator Julian Bray, who describes the team’s performance as ‘absolutely brilliant’. He was also stunned by the teenagers’ ability to conduct their entire presentation in a foreign language. “Hats off to them for delivering the whole thing in perfect English,” Bray said.

The team members were invited to spend a day at a local Wärtsilä office to receive guidance and ask for tips about how to deliver the perfect presentation. They also experienced first-hand what it’s like to work for a company immersed in sustainable technology.

The group won the opportunity to participate in the Oslo event by coming first in the ‘Young Techno’ initiative, which is promoted by industry cluster and incubator Atheno. In cooperation with the region's Young Entrepreneurship platform, Atheno matches local technology companies with schools in the Norwegian municipalities of Stord and Bømlo, bringing together experts and young people in innovation workshops to boost engineering awareness and technical knowledge.

Wärtsilä worked with two schools in the southwest Norwegian county of Hordaland as part of the initiative. During workshops run by the company, Wärtsilä experts focused on encouraging students to think out of the box when considering how to achieve zero-emission marine transport.

The competition for teenagers was run alongside the new Zero Emission Energy Distribution at Sea – or ZEEDS – project, which is a collaboration of six forward-thinking companies that want to see carbon emissions in maritime shipping eliminated as soon as possible. Industry giants Aker Solutions, Equinor, DFDS, Grieg Star, Kvaerner and Wärtsilä introduced the initiative during the event.

The partners were given the same brief as the teenagers. Participants were asked to come up with a number of sustainable ideas with the potential to eradicate the nearly one billion tonnes of carbon emissions that pumped into the atmosphere by the shipping industry every year. The ZEEDS team closed their presentation with an open invitation to potential partners from the entire logistics value chain.

“The ZEEDS partners recognise that the transition to clean fuels will require a collective effort. We believe that by addressing the supply, storage and distribution chain, we can accelerate the switch to cleaner shipping fuels,” said Cato Esperø, Sales Director, Nordics and Baltics, Wärtsilä Marine Business. 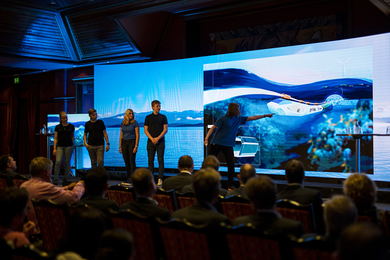 Encouraging youth to lead the way

The commitment of young people to the cause of climate change and the need for sustainability has been both harnessed and encouraged by the workshops and initiatives created by major shipping companies. The team members said they were encouraged by Greta Thunberg, a Swedish climate activist, who has highlighted the issue of climate change through school strikes around the world.

“I really thought I could voice my opinion on this. It's really important we try to make things better. It's a really big problem, and ships stand for a lot of it in terms of burning fuel, while our idea is based on electricity. We know electric motors are not that strong right now, but I believe that if we focus on it, we can make them much better. There are probably tonnes of ways to do it,” said Lars, a team member.

Another team member, Haakon, said with the knowledge gained through the competition, he could envisage taking up a career in maritime technology.

“This experience with Wärtsilä has been really fun,” Haakon said. “As young people, I don't think we'll be able to take our idea further right now, but maybe in the future. Hopefully somebody in the crowd might actually take this up and begin to wonder about it.”

Young Techno and similar initiatives are clearly having an effect on younger generations. Tamara de Gruyter, Vice President, Europe & Africa, Wärtsilä Marine Business, emphasised the value of engaging with young people as a fruitful interaction that can produce great ideas.

“We're used to doing this at Wärtsilä, working with primary and secondary schools to share our industry and the challenges we face,” she said. “It's very interesting to let the students work on projects, and it can be very surprising what comes out.” 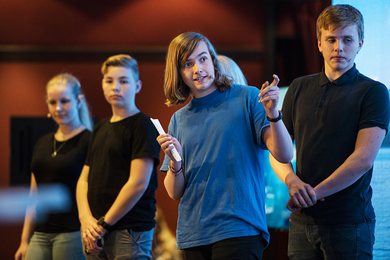