Company
Home
Insights
DEME-d fit for dredging up the future!

DEME-d fit for dredging up the future!

"Belgian company DEME and Wärtsilä joined forces to build, at 40 MW, the world’s most powerful LNG-fuelled dredger. Read on to see why this is important."

"Belgian company DEME and Wärtsilä joined forces to build, at 40 MW, the world’s most powerful LNG-fuelled dredger. Read on to see why this is important."

It could be argued that the dredging industry is immune to slowdowns. Historically, the world’s population and growth has concentrated on coastal areas and this will likely continue, requiring ever more dredging, land reclamation, dyke and port construction in the future.

“More than 60 percent of the world's population lives less than 100 kilometres from open water. Thirteen of the world’s 19 megacities are in coastal zones. Water is a threat and an opportunity to mankind,” says Jan Gabriel, head of newbuilding and conversion at DEME, the Belgian dredging powerhouse, a Wärtsilä customer for longer than most remember.

“Population is predicted to grow to 8-10 billion by 2050. This creates enormous challenges for transporting people and goods in a safe, economic and environmentally acceptable way. Waterborne transport is slated to grow explosively; overpopulation, industrial development and the need for environmental protection will place new pressures and demands on the world’s infrastructure.” 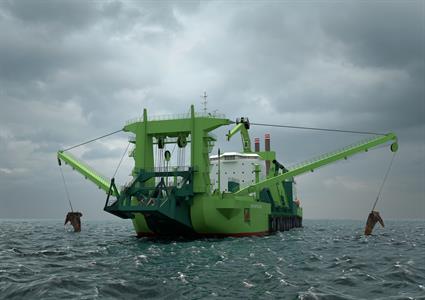 The world’s most powerful cutter dredger and the first to be fuelled by LNG, will rely on Wärtsilä propulsion solutions.

DEME’s “forefathers,” Ackermans & Van Haaren, the Societé Générale de Dragage and Baggerwerken De Cloedt have a history of worldwide dredging excellence going back almost 150 years. Today, DEME is one of the biggest and most prominent dredging companies offering one-stop, multi-disciplinary, turnkey solutions and services to the offshore, wind farm, and port-building industries.

DEME just placed orders for two new LNG-propelled ships, Orion and Spartacus, which will use Wärtsilä engines and propulsion machinery.

Besides offering engineering solutions for many other DEME vessels like hopper dredgers, cable layers and offshore construction vessels over the years, the Orion and Spartacus projects signal a much closer partnership than was originally thought possible - all to benefit efficiencies, the environment and the bottom line.

“The decision to utilise clean LNG fuel represents our commitment to provide environmentally sustainable solutions for our operations. Wärtsilä has extensive experience and vast technological know-how in this field, which is why we have selected them as our partner,” says Gabriel.

The 164 metre-long Spartacus will have a total installed power of 44,180 kW. It will feature four 9-cylinder Wärtsilä 46DF dual-fuel engines, two 8-cylinder Wärtsilä 20DF dual-fuel engines, and a Wärtsilä LNGPac fuel gas storage and supply system with a newly designed bilobe tank arrangement. Wärtsilä will also supply two fixed pitch propellers with shaft assemblies and HP nozzles, and two tunnel thrusters, as well as commissioning, site supervision, and extended project management services. The Wärtsilä equipment is scheduled for delivery to the Royal IHC yard in the Netherlands in late 2017.

“We are pleased to have been involved from the conceptual design stage, since this enables our input on providing the most fuel efficient solution. We are delighted that the Wärtsilä 46DF engine has been selected, as the dual-fuel version of this well-proven and popular engine has only recently been introduced,” says Arthur Boogaard, General Manager, Business Development Special Vessels Wärtsilä.

According to both parties, the key to this successful partnership was to start the procurement process early on between DEME and Wärtsilä.

“Conventional shipbuilding gives shipyards free hands to select equipment vendors for the eventual handover to owners. In this case however, DEME and Wärtsilä worked closely during the project’s planning stage, to ‘de-risk’ and optimise the entire process to secure early performance before a shipyard was even selected. This procurement thinking reduces lead times, which in turn means the ship can go to market earlier and generate revenue quicker. It was very transparent,” says Boogaard.

“In dredging, there is no overcapacity or oversupply as in other shipping segments. And there are multi-million dollar projects, some worth billions, popping up all over the world - Shanghai port, Suez Canal, palm islands in Dubai, wind farms in the North Sea, and other projects across the developing world - so there is still a lot of dredging work to be done,” says Wilhelms.