Very few marine engines are awarded a Guinness World Record. Thanks to Wärtsilä’s common rail injection system, the Wärtsilä 31 engine lays claim to one – the world’s most efficient 4-stroke diesel engine. We meet the inventor to find out how the system was developed and what’s next?

The first Wärtsilä engines featuring the company’s first-generation common rail injection system has successfully reached 100,000 hours of operational time. The system has ensured that the company's marine engines are becoming ever more reliable and efficient – and capable of breaking records. This is not an accident, according to the inventor of the common rail injection system, Dave Jay, Fuel Systems Manager, Engines.

“This just didn’t happen overnight. We worked really hard to attain such a leading position on emissions and efficiency with the second-generation common rail system. This is because we learned as much as we could with the first generation and moved that knowledge across into the second generation,” says Jay.

“The main thing we learned, in the beginning, was that the really high pressures of common rail systems can cause more wear on the valves because heavy fuel has a lot of sediment inside it – which you can never fully filter away – because that’s the nature of heavy fuel. So, if we couldn’t change the fuel, we knew we had to develop harder metals and smart designs,” he explains. 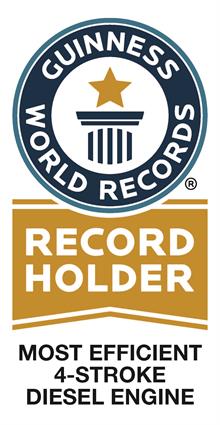 With the second-generation, common-rail-driven Wärtsilä 31 engine, diesel fuel consumption can be as low as 165 g/kWh, putting it significantly ahead of any other 4-stroke diesel engine currently available on the market.

Its exceptional fuel efficiency is made possible through use of new technologies, such as two-stage turbocharging, a high-pressure fuel injection system and adjustable valve actuation, in combination with the next-generation engine control system.

By utilising the new technologies and optimising the engine parameters, efficiency is improved for all areas related to combustion, as well as thermal, mechanical and gas exchange efficiency.

“The common rail system, as the name suggests, is a system which is common for every cylinder or unit of the marine engine,” says Jay.

“Earlier marine engines had a fuel system, wherein each unit had its own jerk pump, and the oil pressure was supplied through these jerk pumps. The problem with that method was that it was quite low on flexibility. Fuel often was not completely combusted, and this is the main contributor to emissions. However, in the common rail system, all the cylinders or units are connected to a rail, and the fuel pressure is provided through the rail. It’s a much more precise and efficient system so there is far less incomplete combustion and much lower emissions.”

In today’s business and environmental climate, efficiency is key, and building engines that sip fuel rather than gulp it down has been the focus of power builders worldwide.

The reduction of the lifecycle cost of the engines, as well as ensuring that current and anticipated environmental regulations are met, are also of utmost importance.

“These common rail engines really do save money by being so fuel-efficient. We’ve worked out that they pay for themselves in approximately 300-500 hours, versus older, jerk-pump equivalent engines. That’s probably just enough time for a vessel to get through its sea trials. They also need less maintenance than the older engines. Cruise ships run typically 8,600 hours in a year. They're more or less running the whole time so you actually have to have absolute reliability, and this is what the Wärtsilä 31 provides.”

Jay is quick to admit that close cooperation with Wärtsilä customers was an essential element in the development of the common rail system.

“I’ve spent time on customers’ ships – together with our service teams – putting together different test systems. They really were very understanding when it came to the first common rail system. They made weekly logs of the early problems, and that really helped us to understand the issues and deal with them. I’ve actually become quite friendly with several of the chief engineers on these ships because we worked so closely together.”

But Jay’s team is not done yet. Common rail could soon lead to a revolutionary efficiency development in marine engine design. “The next step might well be the elimination of cam shafts. It’s a big step, but it isn’t that far away. Now that would really drive efficiency and lower emissions.”