Whether spurred by tightening regulations, customer demand or enlightened corporate policy, today’s shipowners are constantly looking for ways to have their vessels run leaner and cleaner. Wärtsilä’s Environmental Solutions business line provides the tools they need to achieve their goals.

Whether spurred by tightening regulations, customer demand or enlightened corporate policy, today’s shipowners are constantly looking for ways to have their vessels run leaner and cleaner. Wärtsilä’s Environmental Solutions business line provides the tools they need to achieve their goals.

In hindsight, it seems inevitable that the world would finally get tough on marine-generated pollution in the early 21st century. The frenzied pace of global industrialisation in recent years sparked a chain reaction of increased maritime traffic, noticeably higher environmental impact and, finally, pressure on politicians to act.

“It’s common opinion nowadays that something needs to be done,” said Juha Kytölä, Vice President for Environmental Solutions at Wärtsilä Marine Solutions. “Shipping itself is of course mainly happening on the open sea, so people don’t see it in their daily lives except in the major harbours. That said, many of the impacts on the environment are spreading further around them along the shipping routes.”

The largest areas of concern for environmental advocates and regulators are the exhaust gasses and particulates generated by engines as well as the liquid emissions such as ballast and wastewater.

While some shipowners are making improvements to their systems out of altruism or to take advantage of national incentive schemes set up by the likes of Sweden and Norway, the biggest driver for change has been an array of increasingly strict regulations set by the International Maritime Organization (IMO), the UN body that governs global shipping. Since 2000, numerous new IMO rules have come into force to clamp down on various types of pollution. More of these, including some true game-changers, are right around the corner.

When it comes to ship engine emissions, most of the regulatory focus is currently on sulphur oxides (SOx) and nitrogen oxides (NOx). Wärtsilä offers some tried-and-true technologies to tackle both. Ships can continue to run on traditional fuels, rather than switching to low-sulphur fuels, with the help of exhaust scrubbers (see related sidebar), which serve the dual function of reducing SOx and particulates. For NOx reduction, a Selective Catalytic Reactor behind the scrubber uses urea to convert NOx to nitrogen and oxygen.

The next area to watch, according to Kytölä, is CO2, a topic that has come even more into the fore since the Paris agreement on greenhouse gas emissions was reached in December 2015.

“In the long run, CO2 emissions of ships will be regulated, but the concept is not yet formulated,” Kytölä says. CO2 reduction is a complex problem that involves the efficiency of all the ship’s systems, from propulsion to on-board equipment and lighting. Newly built ships are already required to follow an EEDI, or Energy Efficiency Design Index, in their design. “But this is only a first, small step,” Kytölä explains. CO2 regulation, he says, “will have a big impact on the operation and design of ships for the near term, but we don’t yet know how big. We at Wärtsilä believe that this is an area where we need to be strongly active and contribute to the improvements in the industry.”

Forward-thinking shipowners who want to reduce their SOx, NOx and CO2 all in one go can take advantage of another approach offered by Wärtsilä, namely converting their engines to run on natural gas or biofuels – a move that can come with the added bonus of an operational cost savings in many cases according to Kytölä. Additionally, hybrid and battery solutions are available already now. 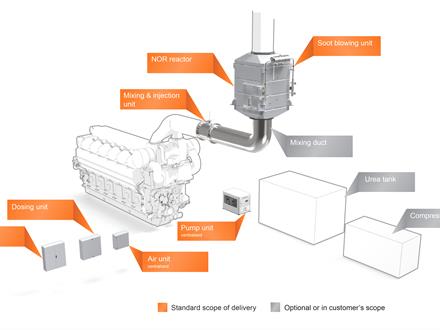 Schematic of the Selective Catalytic Reactor

Invaders and other threats

Along with global warming and disappearing species, a top concern among UN environment watchers is species invasion, the phenomenon by which organisms are picked up from one area of the world and dropped off in another, often with devastating effects on local ecosystems. Unfortunately, the ballast water that ships carry from port to port acts as a perfect vector for such invasion, posing a risk to coastal areas.

There is relief in sight: In September 2017, the IMO’s landmark convention on ballast water will come into effect, requiring all ships that haven’t already done so to install an approved ballast water management system (BWMS) when they next undergo their mandatory five-year drydock cycle.

“There will now be 34,000 ships around the world that will have to install a BWMS, so demand will be enormous,” Kytölä says. He predicts that Wärtsilä’s own type-approved Aquarius BWMS systems, which either use a combination of electro-chlorination and filtration or UV light and filtration, will attract a healthy share of the market.

Though the BWM convention certainly marks a sea change in the marine industry, Kytölä points out that regulations have been incrementally tightening for other types of liquid emissions as well, namely wastewater and bilge water. Wärtsilä provides advanced systems to handle both, as well as solutions that can make ships greener in other ways. Examples include seawater desalination systems that use the engine’s waste heat, thus improving efficiency, and inert gas systems for tankers that help prevent accidents and environmental catastrophe.

Kytölä says that many long-time customers, especially those he terms ‘advanced thinkers’, are in constant dialogue with Wärtsilä about how they can take the latest environmental solutions on board. Lately, particularly as regulatory conditions change, there have been a fair number of inquiries from new customers as well. “That’s probably because we’re known in the market as a very technologically and environmentally oriented player.”

What’s encouraging, according to Kytölä, is that the industry is well versed in the upcoming changes and seems ready to face them head-on. “As an overall picture, I would say that all the shipyards are very well prepared. They are aware of what’s coming and they have an opinion on how to do things.” 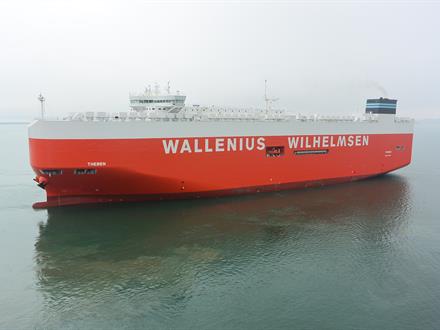 The Ro-Ro vessel “Theben” is equipped with an exhaust gas cleaning (EGC) System from Wärtsilä. The system is the first EGC to be approved by an Asian flag authority.

In late October, the gaze of the world’s maritime industry was firmly fixed on London where the IMO’s Marine Environment Protection Committee was set to deliver its much-anticipated ruling on sulphur emissions. Their verdict: a planned global cap of 0.5% sulphur content in ships’ fuel will come into effect in 2020, as originally envisioned, rather than pushed back to 2025.

Considering that the cap currently stands at 3.5 percent, this scale of reduction is unprecedented. For many shipowners, though, the writing was already on the wall even before the MEPC met. The EU announced that it would be implementing its own 0.5% sulphur cap, applicable within 200 nautical miles of its coastlines from 2020, regardless of what the IMO would decide.

In other words, a sizeable portion of shipowners have already been taking a hard look at compliance strategies, no doubt taking cues from those working in the world’s Sulphur Emission Control Areas, or SECAs, where controls are even tighter. Now the rest are in the same boat, as it were, looking for ways to reach the 0.5% target within the coming three years.

“The easiest and most straightforward is to run on a low-sulphur fuel,” says Sigurd Jenssen, Director of Exhaust Gas Cleaning at Wärtsilä Environmental Solutions. Choices include desulphurised heavy fuel oil, distilled fuels such as marine gas oil, and the fairly nascent LNG.

However, for most ships, the more attractive route is to stick with traditional fuel and add wet scrubbers to reach an equivalent reduction in sulphur output. These systems spray water into the exhaust, capturing the SOx and particulate matter before the water is cleaned and discharged overboard.

“It’s a well-known technology,” says Jenssen. “We still haven’t found a ship where it’s impossible to retrofit a scrubber. You can always find space.”

While Jenssen notes that a majority of shipowners have been taking a wait-and-see approach to the IMO’s regulations, some large operators have already been installing scrubbers in anticipation of the upcoming changes. “They get a cost savings when working inside the SECAs, but they’re also getting know-how in operating these systems – first-hand experience before the global cap is rolled out.”