Wärtsilä recently produced a carbon fibre lifting tool through additive manufacturing – the first in the world. What are its advantages compared to the original steel lifting tools? Three experts at the company give their view.

0 min
Technology
Wärtsilä recently produced a carbon fibre lifting tool through additive manufacturing – the first in the world. What are its advantages compared to the original steel lifting tools? Three experts at the company give their view.

Every cargo ship has a lifting tool – a custom piece of hardware that allows them to move immensely heavy engine parts. These tools are traditionally made of solid steel, and many have unique shapes.

The arsenal at Wärtsilä’s design facilities in Vaasa and Trieste consists of several hundred tools and includes no fewer than 60 unique lifting tool designs. These tools are heavy, expensive to manufacture, and take up a lot of space. Delivery, usually by third-party suppliers, isn’t as fast as employees would want. They require around three to four months from order to installation.

So, it comes as no surprise that engineers at the Vaasa and Trieste facilities were interested in the possibilities offered by Markforged, an American manufacturer of industrial 3D printers, printing systems, and software. The Wärtsilä Delivery Centres in Vaasa and Trieste partnered with Markforged, the Polytechnic University of Turin, and international certification agency Bureau Veritas to develop a new 3D-printed lifting tool in just nine months.

At first, there was a bit of scepticism, says Giuseppe Saragò, Director of Manufacturing Excellence at Wärtsilä.

“People wondered whether additive manufacturing technology could even be used for a tool like this. They thought it would be too expensive and believed the tool was too big to print,” Saragò says.

Hannu Mäntymaa, Director of R&D and Engineering at Wärtsilä, says it’s only natural that there were questions.

“People needed to see it to believe it. But we’ve now proven that it’s possible,” says Mäntymaa. Moreover, there are numerous advantages compared to the original tool.

Unlike the previous tools, which consisted of a single piece of solid steel, the 3D-printed tool is made of different components and can be printed by a relatively inexpensive and small 3D polymer printer. Breaking the tool down into different components also makes it easier to handle. Juho Raukola, Innovation Expert at Wärtsilä, says that the tool takes up the equivalent of four mobile phone boxes, which makes it easy to carry in a suitcase or store in a facility.

“The tool is also very easy to dismantle, and parts are easy to replace if they get damaged,” Raukola says.

The 3D printed lifting tool weighs only 2kg but can lift a surprising volume of 1,300 kg.


Each tool design can be printed anywhere and at any time, only when needed. In the future, it could even be printed on the ships Wärtsilä helps to maintain and service. This means there is no need to keep the tools in stock in warehouses or on board, which in turn reduces logistics and inventory costs.

“Space is an extremely valuable on a vessel,” says Mäntymaa. “Now, it can be used for other tools or components.”

Another advantage of the new lifting tool is the fact that it only weighs 2 kg – about 8 kg less than the original steel tools. It can lift a surprising volume of 1,300 kg, which is more than five times the working load of the original tool.

Saragò adds: “I didn’t expect we would succeed so quickly, and the result exceeded my expectations.”

Developing the first lifting tool in the world through additive manufacturing was quite a challenge.

“We had no experience, no guidelines, and no standards. We only managed through teamwork,” says Raukola.

Mäntymaa agrees: “It was completely new for us and for the industry. It was a great example of good cooperation and what innovativeness can create. We were open to exploring something radically new.”

The tool has been certified for industrial application with CE Certification by international certification agency Bureau Veritas.

“This standard shows the quality of our new tool,” says Raukola. “We needed to know all the details, like exactly how strong carbon fibre is and the effect of humidity.” 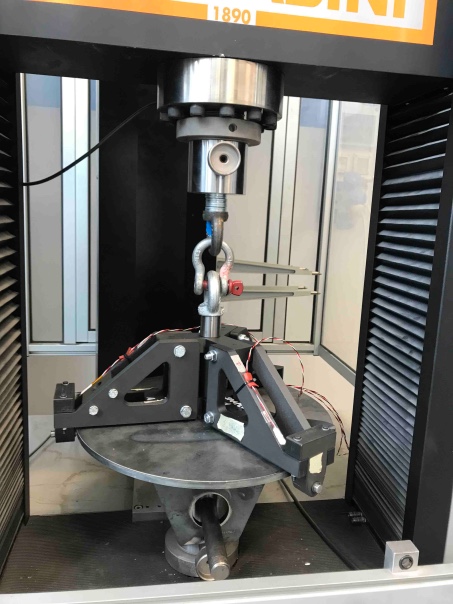 This is just an example of a bigger vision that goes beyond additive manufacturing,” says Saragò

Wärtsilä has been using additive manufacturing for several years, but Saragò believes the new tool proves there are many more application opportunities.

“It’s important to invest more in this technology to be able to create more of these lighter and faster solutions, both tools and engine components. We’re ready for the next step,” Saragò says.

Mäntymaa says that the tool is just one example of what Wärtsilä can and wants to do.

“We want to be a frontrunner in smart use of additive manufacturing, and we are,” says Mäntymaa. “The possibilities are there and we will continue to explore them.”

“This is just an example of a bigger vision that goes beyond additive manufacturing,” says Saragò. He mentions Wärtsilä’s Smart Technology Hub Network. “We are creating a network of excellence and expertise worldwide that can work together to speed up innovation,” he says enthusiastically.

This network of innovators will be further strengthened, Mäntymaa says. “Different perspectives, diverse participants and sharing of resources will help us creating more breakthrough innovations.”

“We have to find out where additive manufacturing is needed most,” Raukola says. “This is just the beginning.”