Can renewable energy expand beyond wind and solar?

So far, the conversation around renewable energy has focused primarily on solar and wind sources. These technologies are indeed growing and becoming realistic solutions worldwide, but there are other sources that may have the potential to be just as effective and useful in places where wind and solar are not an option.

Solar and wind get the bulk of the attention because of their ability to scale (as wind has done and solar is fast catching up), says Daniel Kammen, Distinguished Professor of Energy in the Energy and Resources Group at the University of California, Berkeley. That said, there are many other renewable sources in use today that are the subject of scale-up research and expanded deployment, including ocean energy, geothermal, bioenergy, and renewable synthetic fuels from Power-to-X (P2X). All of these technologies are part of the analysis and discussion around the transition to a 100% renewable energy future.

“Ocean, biomass, and geothermal are not forecast to get to the scale that solar and wind could reach, but all are important,” Kammen says. "Plans to reach 100% clean energy by 2045 are now signed into law in California, New York, Washington, Hawaii and New Mexico. These standards are particularly important opportunity for diversifying the renewable energy pipeline.“ 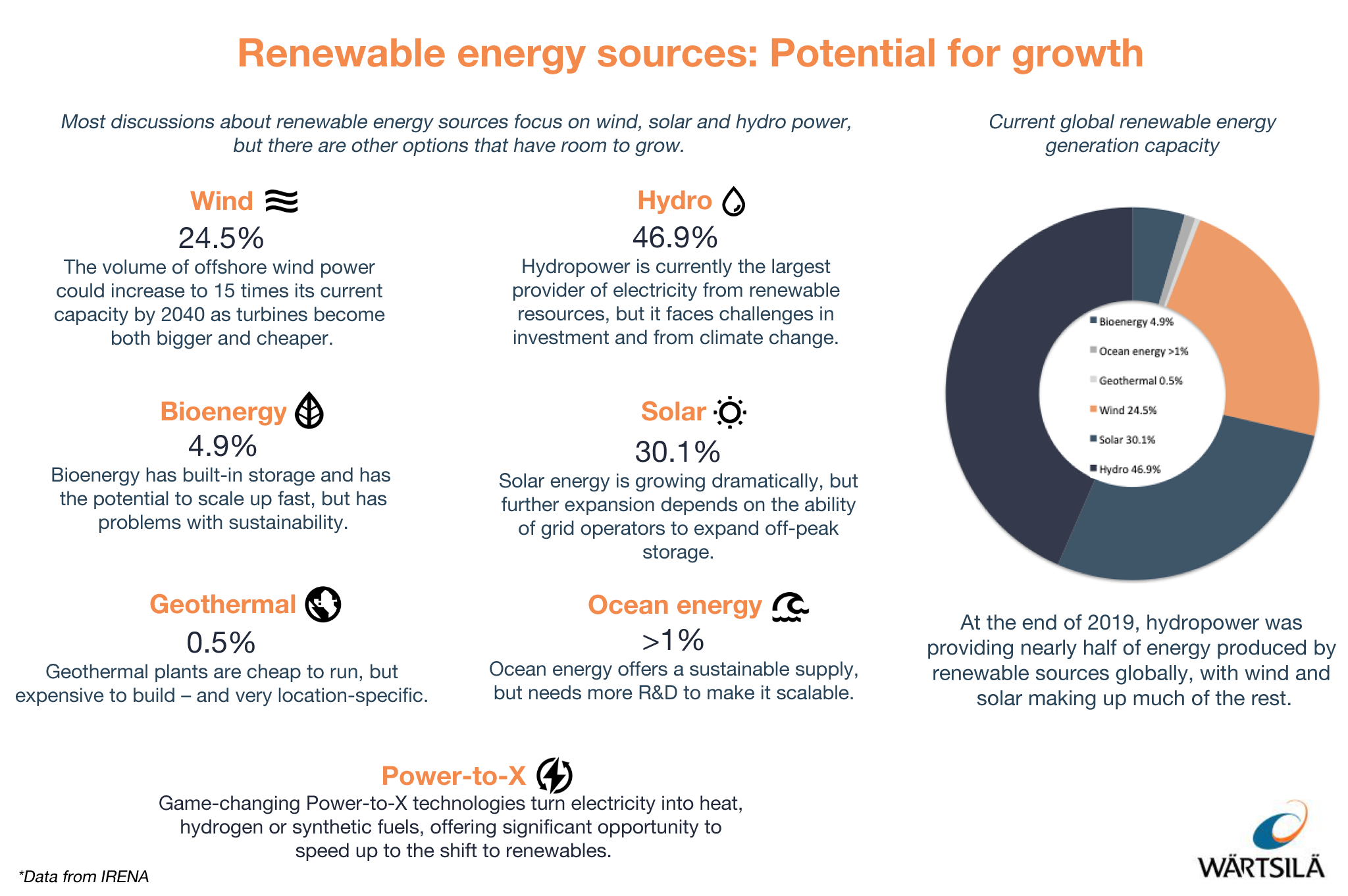 Bioenergy: Potential to scale up fast

Bioenergy, which includes any energy made from natural sources, has the potential to play a key role because it inherently builds in storage, includes a wide range of sources and applications and is typically a technology that can create quite a lot of jobs (including in rural areas), according to Dolf Gielen, Director of the International Renewable Energy Agency (IRENA). Additionally, volume-wise, bioenergy has the biggest potential to scale up fast.

At the moment, experts are looking closely at advanced biofuels, such as bio-methanol. Although these are a relatively recent development, Gielen believes that they can be especially useful in shipping and as feedstock for petrochemicals because they provide a practical alternative to fossil fuels and require little change in fuel distribution infrastructure, so therefore they can be rapidly deployed.

But bioenergy is not without its challenges. A significant one is the limited size of supply to meet the global energy demand, especially in shipping and transportation, says Tommi Rintamäki, Senior Manager, Power-to-X at Wärtsilä Energy.

Additionally, the rate of growth just is not fast enough. Gielen suggests that a ten-fold increase in investment volume is required to get “what would be needed.”

The very greenhouse gas that is fuelling climate change can actually be used to help fight it. In P2X, CO2 is captured in order to be recycled and used as a raw material to create synthetic, carbon-neutral fuels.

“Synthetic fuels offer a great way to store energy to be used during, for instance, colder seasons when a lot of energy is needed and the demand cannot be met with only wind and solar due to the intermittency of renewables,” Rintamäki says. “This allows us to produce extra in the summer and then store for utilisation in winter. The sources — CO2, water, solar energy, and wind energy — are unlimited, so P2X is ready for massive scaling up to solve the climate change problem.”

However, this technology also faces a challenge that prevents its potential from being utilised to the maximum: the production of synthetic fuels requires a lot of new renewable electricity production capacity. For that reason, says Rintamäki, it is crucial to get investments in these resources moving.

Kammen notes that geothermal energy — which includes conventional geothermal power and shallow ground heat pumps, as well as deep geothermal — could play a much larger role in the future. Gielen agrees that geothermal today is an established technology; notably, countries of the Pacific Rim and the west coast of the Americas as well as some island nations present a significant potential for power generation through geothermal. Capacities, however, are still not enormous – somewhere in the neighbourhood of 14 GW out of 7,000 GW worldwide in terms of power generation capacity. Enhanced geothermal systems represent the most significant potential for geothermal electricity production, but while they are inexpensive to run, they are very costly to build. Additionally, geothermal energy has limits to its expansion; experts call it “the most location-specific energy source known to man” due to its activity along the tectonic plates of the earth’s crust.

“It’s growing, I think the capacity addition last year was about 700 MW but it’s growing from a relatively low scale. The thermal applications are growing a bit faster but that’s mainly because of district heating in China,” Gielen says.

Ocean energy presents a relatively wide range of sources.  The three basic types of energy produced from the oceans are waves (wave energy, wave power), ocean tidal power (ocean high and low tides) and temperature differences in the water (Ocean Thermal Energy Conversion, OTEC). The advantage is that oceans are a truly global energy resource. Ocean energy is currently on the rise and could be particularly interesting in the context of islands, Gielen notes. In addition, the generation profile of marine technologies is more predictable than sources like wind and solar, giving them an edge.

A report by IRENA found that tidal stream and wave energy converters are the technologies of greatest medium-term relevance. Apart from tidal range, which is only suitable in very limited locations, they are the most advanced ocean energy technologies available, albeit at a pre-commercial stage. Other ocean energy technologies that harness energy from the differences in temperature and salinity of ocean water might become increasingly relevant over longer time horizons.

A long way to go

According to Kammen, biomass, geothermal, and ocean energy are all in use today and the aim is quickly to scale each to be over 5% of global energy use. Gielen believes that while the technical potential of these sources is very significant, what’s more relevant for the next 10-20 years is the discussion around their economic potential.

“The economics of these energy sources are not that good at the moment, but that’s also because the technologies are not that widely applied. Wider deployment will result in economies of scale and technology learning. So, we are facing a ‘chicken and egg’ type of problem. And the development of the technology is taking a bit longer than anticipated so it’s a situation where we need a more dedicated push from governments to overcome this initial hurdle,” Gielen says.