Burkina Faso, one of the world’s least electrified nations, aims to provide 100% access to electricity to its urban population and 49% for its rural population by 2020 compared to the current electrification rate of 20%. So how can a landlocked, low-income economy, with limited resources, achieve this ambitious target? Find out.

In 2016, Burkina Faso had an average 9.8 power outages per month of 9-10 hours each. The same year, Burkina Faso’s cabinet approved electricity reforms to bring in a new market-linked tariff regime; open up the electricity market to competition from the private sector, and to accelerate cost-effective generation via renewable energy.

Last year the government also adopted a new strategy to particularly increase solar generation in the energy mix. These efforts seem to be paying off as solar installations have been growing at an estimated 30% annually since 2014 when they accounted for less than 1% of the energy mix. Despite that, just 3% of the rural population in Burkina Faso and 58% of its urban population had access to electricity until December 2017.

“The Government is facing a dilemma. On one hand it needs to expand the national electricity grid to interconnect cities and villages in order to favor rural electrification. On the other hand, it needs to add new generation capacities to meet the growing electricity demand and achieve national electrification targets set for 2020. Investing in both development goals can be challenging considering the CAPEX required for each of them,” explains Tarik Sfendla, Project Manager, Wärtsilä Energy Solutions.

The state grants national utility company, Sonabel, a yearly subsidy, to mitigate the deficit. This subsidy was estimated to have reached EUR 43 million in 2014. The report explains that ‘Sonabel’s financial difficulties have hampered the rehabilitation and maintenance of electricity networks and the ageing fleet of power plants’

According to a European Commission 2017 report - Mapping the least-cost options for rural electrification in Burkina Faso, - ‘Burkina Faso still has one of the highest costs of electricity (0.21 EUR/kWh) compared with its neighbouring countries. Since 2010, the average cost of electricity production was higher than its selling price.’

Currently, thermal generation (Heavy Fuel Oil & Light Fuel Oil) accounts for the largest part of the country’s total installed capacity of 325 MW followed by hydropower. Since Burkina Faso is landlocked, there are no ports nearby and petroleum imports have to be transported over 1000kms by road, which significantly increases costs. The country also imports nearly 30% of its electricity from neighbouring countries like Ghana, Togo and Ivory Coast because of insufficient and inefficient generation capacities.

Down to the last detail

There is no doubt that upscaling existing infrastructure or setting up new power capacities with efficient technologies here is tough. But it’s not impossible, as has been recently demonstrated in Essakane, a small village in the middle of the desert in the Sahel region of Burkina Faso. This is where Canadian mining company Iamgold has its off-grid mine that produces almost 400,000 ounces of gold per year. Until last year, this mine was run on a 57 MW power plant completely dependent on imported HFO.

Wärtsilä had to defy all the odds to build this additional capacity in just 10 months. Sfendla recounts the enormity of the task. “We had to transport more than 170 containers in such a short time. The material and the equipment were arriving from different continents across the world - from China, Europe, USA, Malaysia and Turkey to Abidjan in Ivory Coast. From Abidjan these materials were transported by rail up to Ouagadougou, the capital of Burkina Faso, and from there they were transported by trucks.  We needed flexibility to overcome the challenges and ensure on-time delivery as per our plans. In the end it went off quite well.”

Simultaneously, Wärtsilä forged relationships with local companies and hired local contractors to build an inclusive workforce comprising people who lived in villages in and around the plant. Over the next few months, well-trained industrial labour including 300 people from nearby villages got working with high volumes of material to put all the pieces together. But it was not an easy task. 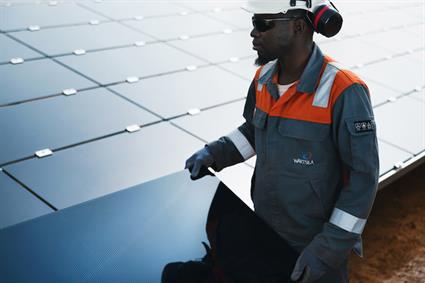 Take for instance the case of setting up a ‘table’ or the structure to mount PVs. The Essakane solar plant required 1440 of such tables. It took 10 days to make the first table.  Over the next few days, efficiencies increased and soon 60 tables were being made in a matter of a day!

It’s intricate efficiencies like these that have helped build the Essakane plant in a record time of 10 months. It’s no mean feat considering that it is Africa’s largest hybrid power plant and the world’s largest isolated hybrid power plant of this kind. That’s not all. Wärtsilä’s technology will help the mine reduce fuel consumption by approximately 6 million litres and lower its carbon dioxide emissions by 18,500 tons a year.

“The solar plant has largely contributed to reduce the HFO consumption of the mine, which will enable a considerable reduction in CO2 emission and reduce the cost of generation of the mine. It is a very important signal for the country that hybrid power plants can enable industries to operate at competitive cost in Burkina Faso which will attract investors to the country,” says Mamadou Goumble, Vice President, Africa Wärtsilä Energy Solutions.

With demand for electricity in Burkina Faso growing at an average 12-13% yearly, off-grid solutions and hybrid plants like Wärtsilä’s that increase flexibility and help optimise the use of existing infrastructure, will play a key role in building a brighter future for Burkina Faso and several other African countries. The Essakane project is proof of that.