Bring in the Energy

Examination of the development of water glycol heated regasification systems for use on FSRUs and offshore jetties.

Europe’s demand for LNG has increased significantly during the past year. Normally, LNG is imported via conventional shore-based regasification plants. This involves transferring the LNG to terminals for storage in tanks before it is regasified and pressurised with vaporising equipment, prior to it being delivered to the distribution networks. Such terminals, however, require a lengthy construction time, and the current instant demand for LNG in Europe clearly requires quicker solutions.

During the past 15 years, alternative solutions have been developed that are faster and which, by extension, are also less expensive. Among these are Wärtsilä’s regasification modules designed for use onboard floating storage and regasification unit (FSRU) vessels, as well as shuttle and regasification vessels (SRVs).

The increasing global demand for LNG in order to ensure energy security, is increasing the pressure for chartering FSRUs, and is supporting investments in new units. To cover the new demand in Europe, several FSRU’s have been chartered by different countries. These FSRU’s have all been available on the market, either built on speculation and not yet under charter, or available following the end of a charter. At present, the surge in demand has resulted in virtually no FSRUs being any more available. Thus, in order to cover Europe’s energy gap, the options are either to convert old LNG carriers to FSRU’s, or build completely new FSRU vessels.

For these vessels, having the regasification (regas) equipment onboard allows high-pressure gas to be delivered to land-based networks, either via a floating buoy and a submerged pipeline system from offshore, or via loading arms on a jetty. Both FSRUs and SRVs provide greater flexibility than conventional land-based regas facilities, and the time from investment decision to start-up is relatively short.

By offering a fast-track means for opening energy markets, supply diversity is increased, costs are reduced, and environmental benefits are enhanced. A further advantage of utilising an FSRU, rather than a fixed land-based regas facility, is that it can be moved to a new offshore location should the business environment change.

These systems were delivered as complete modules for easy integration into LNG vessels, both for newbuild vessels and for conversion projects to existing ships. The system depicted in Figure 1 has an intermediate loop of propane, where the propane evaporates against the seawater in plate heaters (PHEs). The propane condensates towards the LNG in printed circuit heat exchangers (PCHEs). By using the latent heat in the propane, only small amounts of it need to be circulated, while its low freezing point allows the use of printed circuit heat exchangers that are very compact and efficient. As a result, the entire system is rather compact and suitable for installation onboard ships with limited availability of space.

Figure 1. A seawater heated system with propane used as the intermediate medium

Subsequent to these deliveries, Wärtsilä developed seawater heated systems using water glycol instead of propane as the intermediate medium. Propane is a very suitable fluid for this application, since it will not freeze and has good thermodynamic properties. However, the use of hydrocarbons in the deck area is restricted by some of the industry’s major operators. With water glycol, the heat exchangers need to be larger but the use of hydrocarbons as the intermediate fluid is eliminated. Since 2017, Wärtsilä has produced and delivered nine systems of this type. As shown in Figure 2, the system has an intermediate closed circulating loop of water glycol, which heats the LNG in two stages. The initial heating stage is in a shell and tube heat exchanger taking the LNG to a minimum heat of -15˚C, and the second stage is in a printed circuit heater, taking the temperature up to approximately 10˚C below that of the seawater. 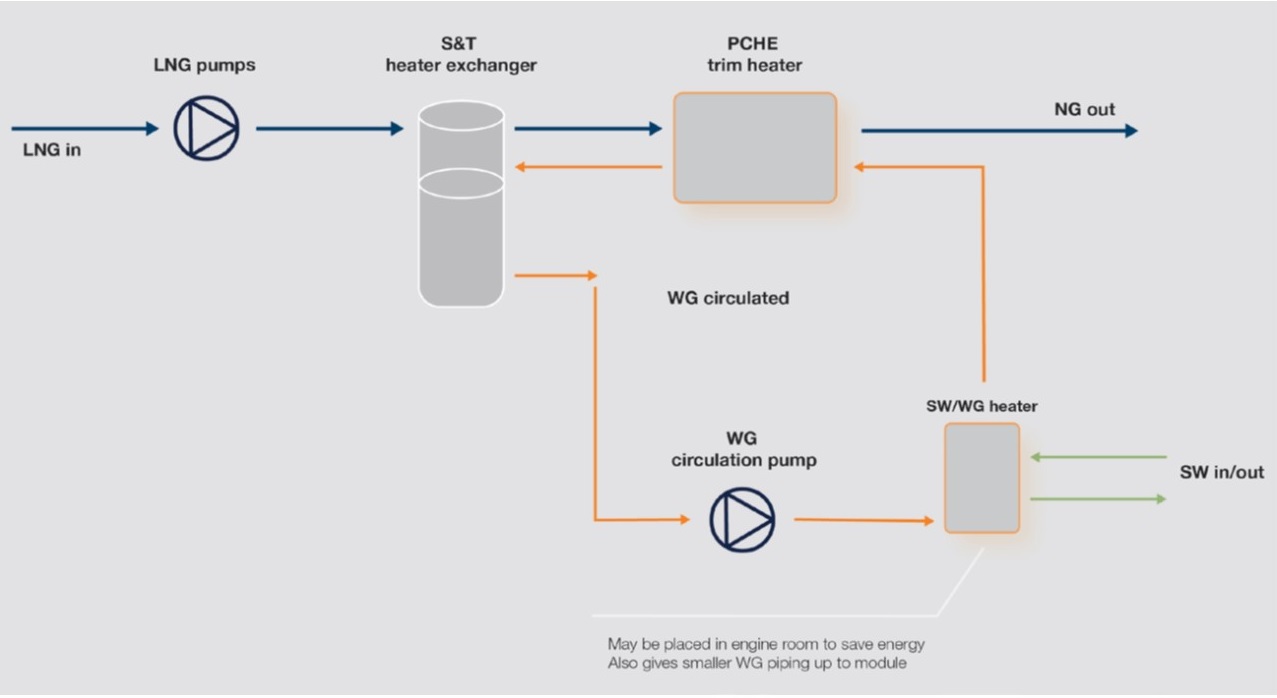 Figure 2. A seawater heated system with water glycol used as the intermediate medium. 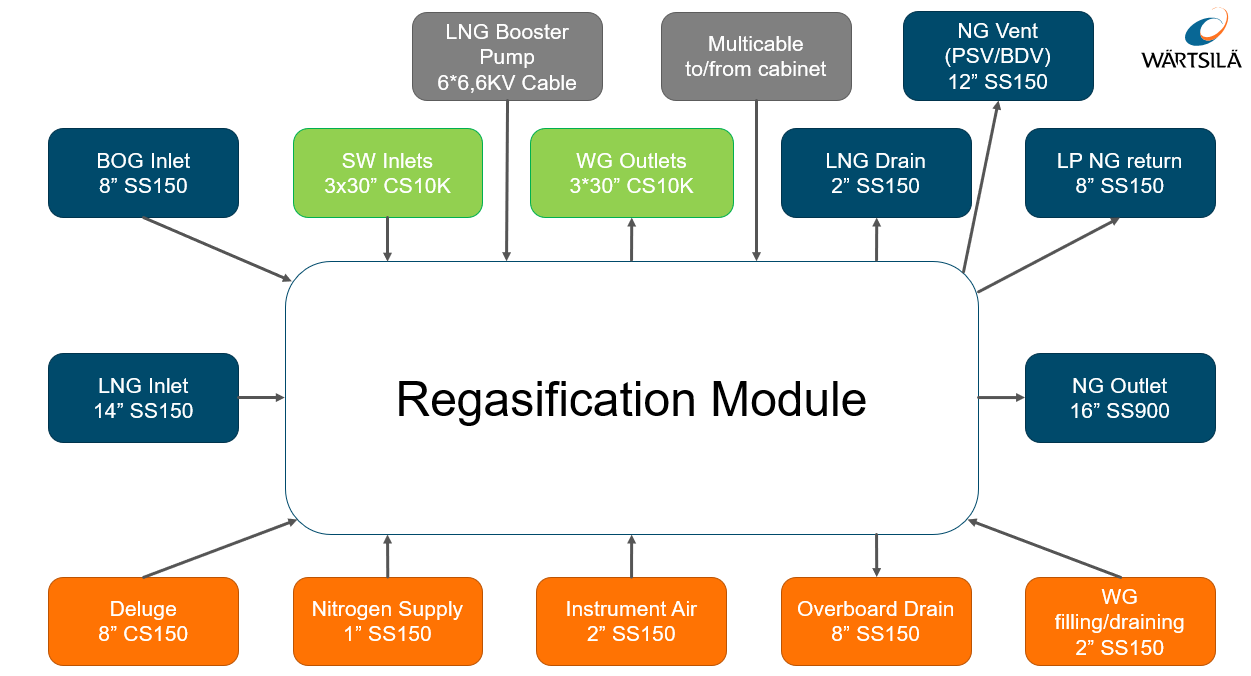 Wärtsilä regas systems are delivered as complete modules, with all the engineering, component procurement, and construction of the module carried out entirely by the company’s execution team. This makes integration of the modules very easy. All the interconnection work and intercommunication activities with the required utility systems is similarly very simple and straightforward.

In addition to those already mentioned, other benefits of the Wärtsilä systems include: a fast delivery time; the compactness and flexibility of the plant configuration; the ease of operation and maintenance; and the fact that all equipment can be serviced or repaired onboard the vessel. 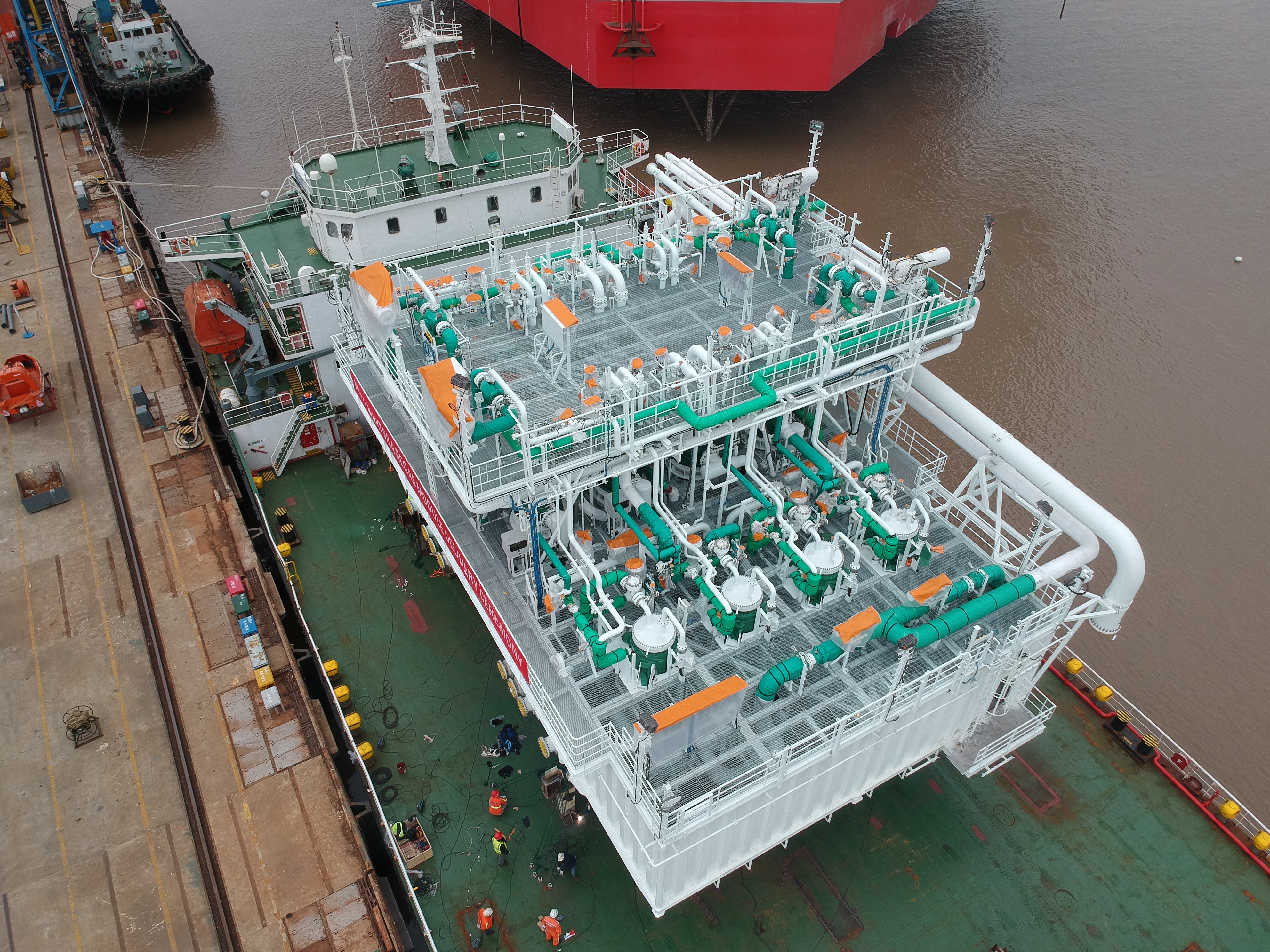 During summer, all heat for the regasification is normally supplied from the seawater (open loop). However, during winter seawater temperatures in most European waters are low. When the seawater is below roughly 10C, other heat-sources are needed to support the seawater heating (combined loop). This supporting heat is usually supplied by steam, but other sources - hot water for example, could also be used. When seawater temperatures are below about 3C, all heating needs to come from sources other than seawater (closed loop).

Some FSRU’s are already equipped with steam heating equipment, and some are not. For those without that are likely to operate in cold seawater locations, the regas systems must be modified in order to allow utilization of an alternative heat source.

Heating the seawater with steam 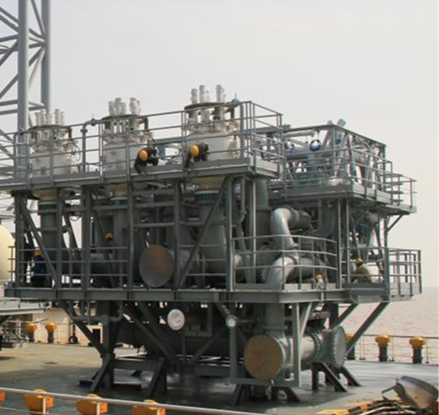 Figure 5. A Wärtsilä steam/seawater module ready for shipment. On this module, also seawater filters are included.

With the new intermediate WG system, it is possible to heat the water glycol loop directly with steam. Since WG and steam are not corrosive, A standard material such as SS316 can be used to avoid corrosion in the steam heaters. Also, since the heat is transferred directly to the WG loop, the required steam supply will be according to the actual regas capacity, contrary to the above seawater case where the seawater flow is constant regardless of the regas flow, and the seawater must be heated to a certain temperature.

Figure 7. general upset of a steam heating system in a WG loop.

A similar system with WG loop heating can take more heat from the seawater when its temperature is 8 C. This is because the seawater can be cooled to +1C on the outlet, and the only support from steam would be to increase the WG flow by 2C in order to give the required WG temp to the LNG heaters. When the seawater temperature falls further, a portion of the WG must bypass the seawater heater in order to keep the seawater outlet above freezing point. It is, nevertheless, more efficient than heating the seawater.

The above figure shows steam-consumption as a function of the seawater temperature for seawater heating and WG heating. The graph represents a regas train operated at 100% capacity. In cases where the regas capacity decreases, the seawater heating case will be even steeper, since the same amount of seawater is still heated regardless.

Wärtsilä Gas Solutions has a complete offering of regasification modules for easy integration into vessels, The company provides fast and secure deliveries, regardless of whether it is for a newbuild, conversion of an LNG carrier into a FSRU, or the retrofitting of an existing FSRU.
Supporting steam systems can also be delivered for different types of regas plants. They can be delivered as modules, or as loose items for integration by the yard. Again, these are available for new-builds, conversions. or the retrofitting of existing FSRU’s.